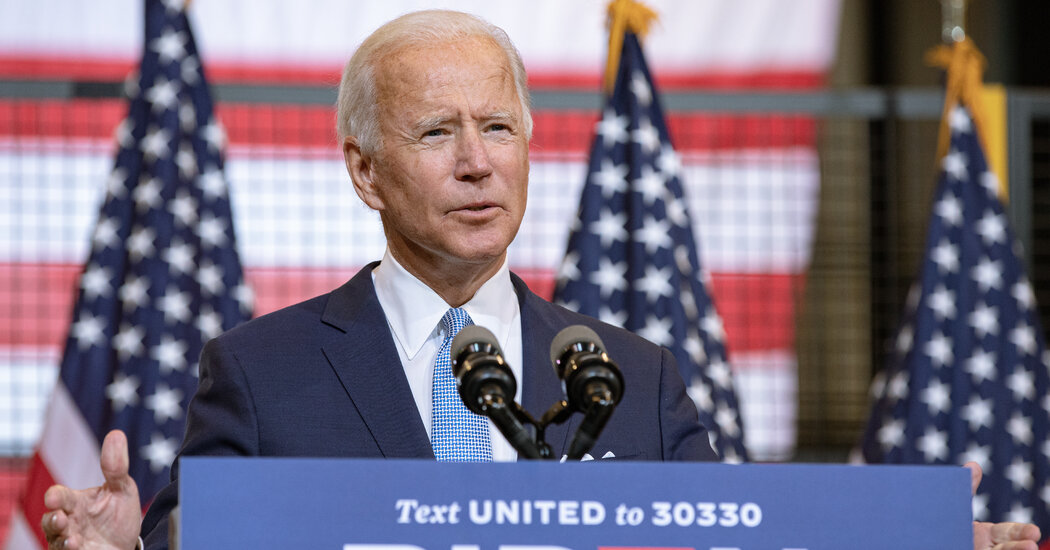 Joseph R. Biden Jr. is expected to report a record-breaking haul of donations for August, raising more than $300 million between his campaign and his shared committees with the Democratic Party, according to two people familiar with the matter.

The sum would shatter past monthly records as small donors have poured money into Mr. Biden’s coffers, especially since the selection of Senator Kamala Harris as his running mate, and big contributors, from Silicon Valley to Wall Street, have given checks that can be as large as $721,300.

In a sign of the financial momentum behind Democrats, ActBlue, the main site that processes donations to the party, reported the second-biggest fund-raising day in its history on Monday, with more than $35 million donated. A majority of Mr. Biden’s August total came from online grass-roots donors, according to another person familiar with the figures.

The people familiar with Mr. Biden’s fund-raising did not know the exact final figure for the month of August, or how much higher than $300 million it would be.

The Biden campaign did not immediately respond to a request for comment.

Mr. Biden’s sum laps what is believed to be the previous monthly record of $193 million, set by Barack Obama in September 2008, though there is no formal record-keeping.

The news of the money haul comes as the general election enters an intense final two-month sprint following the conventions. President Trump traveled to Kenosha, Wis., on Tuesday, the site of unrest following the police shooting of a Black man, Jacob Blake. The president has tried to cut into Mr. Biden’s polling lead by distorting Mr. Biden’s record on law enforcement and accusing the former vice president of being tolerant of violent mobs.

Mr. Biden has forcefully rejected that characterization, and charged that it was the president who was making the country unsafe with divisive, inflammatory behavior.

Both sides are ramping up television and digital ad buys, and Mr. Biden’s enormous haul ensures he will have the funds both to defend states that Hillary Clinton carried in 2016 and to try to make incursions into Mr. Trump’s territory.

However far above $300 million the final figure is, it would greatly surpass previous monthly hauls by candidates of both parties. It is more, for instance, than what Mr. Trump ($90 million) and Mrs. Clinton ($143 million) raised in August 2016 — combined.

In July, President Trump and the Republican National Committee out-raised Mr. Biden and the Democrats, $165 million to $140 million. Mr. Trump entered August with more than $300 million in the bank in tandem with the party; Mr. Biden had $294 million, according to the campaigns.

The Trump campaign has not announced its August fund-raising total but has said it raised $76 million over its four-day convention last week, slightly more than the $70 million the Biden campaign said it collected during its convention a week earlier.

In a sign of how flush the former vice president’s campaign is, Mr. Biden reserved a two-minute commercial nationally on the final night of the Republican National Convention contrasting himself with Mr. Trump.

Jason Miller, a senior adviser to the Trump campaign, scoffed at the use of funds.

“The Biden campaign would’ve been smarter to light it on fire and use it to stay warm on a cold wintry night,” he said in an interview before the full Biden fund-raising figure was known. “They literally just threw it away.”

The Biden campaign had previously announced that it raised $48 million in the first 48 hours after Ms. Harris was named as Mr. Biden’s vice-presidential choice. Together with the Democratic convention, those two periods add up to nearly $120 million raised in just six days.

ActBlue has processed at least $11 million in donations every day since Ms. Harris was chosen three weeks ago. In the preceding 41 days, the site had processed that much in a day only twice.

Notably, a very large share of the donations that arrived immediately after Ms. Harris’s selection came organically from online donors, according to party officials: $39 million of the $48 million.

Big donors have also made an impact. During the general election, donation limits are far higher because Mr. Biden and Mr. Trump collect contributions into joint funds with the national and state parties, topping half a million dollars.

Before that, the record had held for more than 2,500 days.