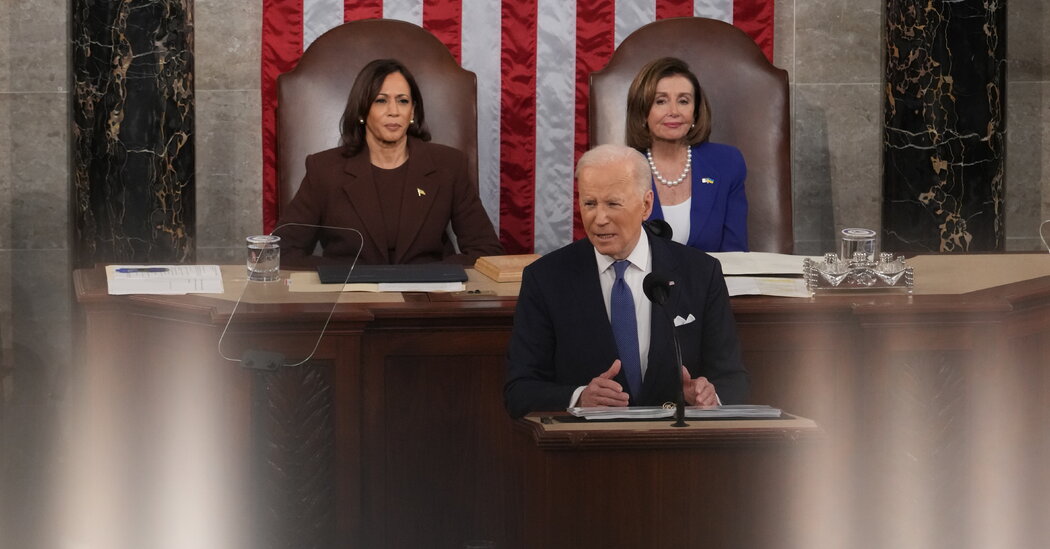 WASHINGTON — President Biden’s challenge on Tuesday night was to unite Americans behind his confrontation with a brutal Russian leader who has shattered more than three decades of post-Cold War peace without setting off fears that the return of superpower conflict will inflict an unacceptable cost.

Even as scenes of ruin were being flashed to the world from the Ukrainian cities of Kyiv and Kharkiv, Mr. Biden argued that it was worth paying a price — one he suggested he could limit — to preserve freedom in Eastern Europe. And he celebrated his success in organizing the Western allies to impose truly painful sanctions on Russia’s economy as punishment for the invasion of Ukraine and with the hope of loosening President Vladimir V. Putin’s hold over his country.

Mr. Putin’s aggression, he argued, had actually strengthened an Atlantic alliance the Russian leader intended to splinter. And he made the case that even if Mr. Putin prevailed on the ground in Ukraine, Russia would emerge from this “premeditated and unprovoked” war “weaker and the rest of the world stronger.”

Yet Mr. Biden left unaddressed, at least for now, several of the hardest questions about where America goes next — and how it will ultimately emerge from Mr. Putin’s audacious effort to dismantle a world order largely designed in Washington.

What happens if the combination of destabilizing Russia’s currency, depriving it of access to Western technology and freezing the assets of its oligarchs and their families fails to force Mr. Putin into retreat? And what if, once he is finished with Ukraine, the Russian leader keeps going, determined to re-establish the sphere of influence that the Soviet Union’s last leaders gave up, disastrously in Mr. Putin’s view?

For the first time since satellites detected the massing of Russian troops on the Ukrainian border last fall, Mr. Biden openly acknowledged that he is not certain where Mr. Putin is going to stop.

So he drew the line along the borders of an expanded NATO, the map Mr. Putin insists must be rolled back. “Our forces are not going to Europe to fight in Ukraine, but to defend our NATO allies,” he said, “in the event that Putin decides to keep moving west.”

That last line was the most ominous. Mr. Biden and his aides have frequently debated in recent months whether the Russian leader’s ambitions go far beyond Ukraine.

They look at the electronic maps on the screens in the White House Situation Room, and question whether, at nearly 70, the Russian leader thinks this is his last moment to string together a conquered Ukraine, a captive Belarus, a dependent Kazakhstan and maybe even a vulnerable Moldova into an approximation of the Soviet Union’s old glory.

Eastern Europe was not the battlefield Mr. Biden had in mind when he raised the idea last year that the battle of “autocracy versus democracy” would be the defining foreign policy principle of his administration.

At the time, he was thinking more about China than Russia, more about spurring 21st-century American competitiveness than containing a Russia laden with grievances from the 20th century. When Mr. Biden first started talking about the “battle between the utility of democracies in the 21st century and autocracies,” he was focused on the long game of rebuilding the American semiconductor manufacturing base, keeping ahead of an innovative Chinese military and demonstrating that the messy business of self-determination can still outperform top-down power.

Russia was regarded as a disrupter, but one that could most likely be kept in the box.

Now it is clear that containing Mr. Putin could dominate the next three years of his presidency, imperiling the much delayed “pivot to Asia” that has been long discussed in American foreign policy circles but never fully executed.

Mr. Biden sounded on Tuesday night like a man who had decided that history gave him no other choice.

Mr. Biden is one of the few remaining architects of the post-Soviet order still in power in Washington, and to him, the borders of NATO are more than lines on a map. They are a living testament to what happens when free people can pick their own allies.

To Mr. Putin, of course, that same map looks like an invading boa constrictor, a string of nations lured by the West in a plot to squeeze Russia until it can no longer breathe. He has railed against that design since 2007. And when he began to act — invading Georgia in 2008 and annexing Crimea in 2014 — he met little Western resistance. It took a long while for the United States and its allies to organize sanctions, and they had little bite when imposed.

Mr. Biden was part of those decisions, especially on Crimea. But he seemed to acknowledge on Tuesday evening that the weak response had only encouraged Russia’s strongman. “Throughout our history we’ve learned this lesson: When dictators do not pay a price for their aggression, they cause more chaos,” Mr. Biden said. The cost to America and the world “keeps rising,” he added.

But Mr. Biden’s description of the problem does not help much in figuring out how this war ends.

Clearly, Mr. Putin is not planning to return to the old days of negotiating arms control treaties and rules for conducting military exercises, as the United States has offered. Instead, he is testing whether he can achieve more lasting change by force rather than by negotiation, and do it in weeks rather than years.

For his part, Mr. Biden has offered no offramps to the Russian leader, at least publicly, no compromises of the kind that marked the division of Europe after World War II. And Mr. Putin has shown no interest in them, figuring that having gone this far, he may achieve more by continuing his brutal tactics than he can by diplomacy.

Not surprisingly, Mr. Biden, both a designer and an enthusiastic promoter of the Western alliance, views Mr. Putin’s eagerness to tear it apart as a desperate effort to turn back the clock.

But he also knows that there is no guarantee that Mr. Putin — emboldened by the U.S. withdrawal from Afghanistan, convinced of his power to withstand any sanctions thrown at him — will fail.

“No one can say definitively what kind of world will emerge from the ashes in Ukraine,” Richard Fontaine, the chief executive of the Center for a New American Security and a Republican foreign policy strategist, wrote on Tuesday.

President Franklin D. Roosevelt did not know, either, when he addressed Congress in 1941, with Hitler just six months from bombing and laying siege to Kyiv amid his drive into the Soviet Union.

“The parallels between that moment and this one are striking,” Michael Beschloss, the presidential historian, said on Tuesday, noting that democracy at the time was being “threatened within America and outside,” referring in part to the isolationist “America First” movement that has echoes today in the pro-Trump wing of the Republican Party.

Roosevelt rose to the moment, defined America’s “Four Freedoms,” and built the Lend-Lease Act to help Britain keep Nazi Germany at bay. But America did not enter the war until it was forced to, at the end of 1941.

In 2022, Mr. Biden’s task is to keep history from repeating itself. But he acknowledged that it would be a while before the full implications of Russia’s decision to go to war to play out.

“This is the real test,” he said. “It’s going to take time. So let us continue to draw inspiration from the iron will of the Ukrainian people.”