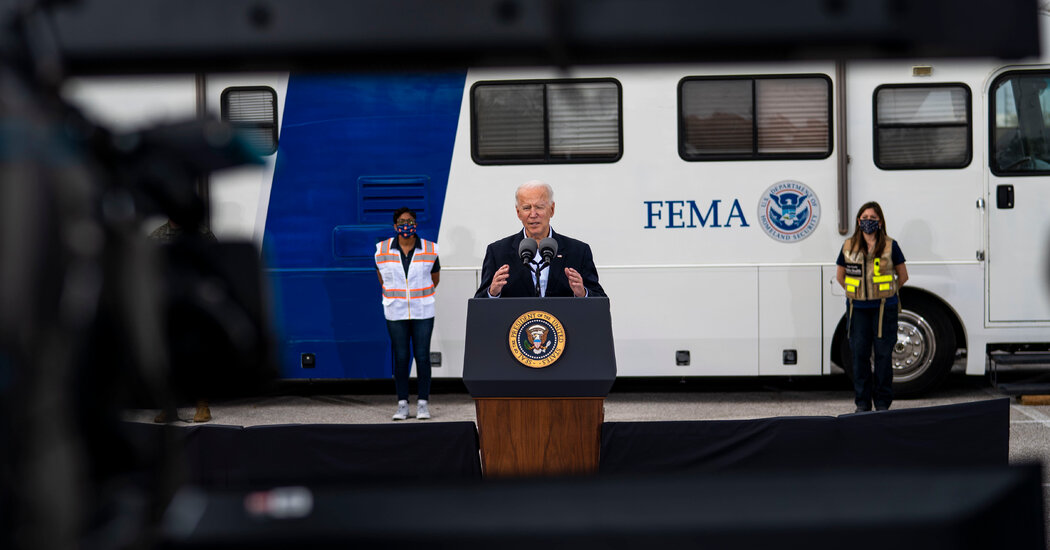 WASHINGTON — The Biden administration said it will spend $1 billion to help communities prepare for worsening natural disasters, the latest sign of the toll that climate change is already taking across the United States.

The change will double the current size of a Federal Emergency Management Agency program that gives money to state and local governments to reduce their vulnerability before a disaster happens — for example, building sea walls, elevating or relocating flood-prone homes.

The new money is less than what some disaster experts had said is needed, especially given as a warming planet is making hurricanes, flooding, wildfires and other disasters both more frequent and destructive. The United States experienced 22 disasters that exceeded $1 billion each in damages last year, a record.

The formula that determines funding would have allowed the administration to put as much as $10 billion toward the program, which FEMA officials considered in the early days of Mr. Biden’s administration.

But cities and states might struggle to spend that much money on climate resilience projects, according to Craig Fugate, who led FEMA under President Barack Obama and led President Biden’s transition team.

“It’s a good start,” Mr. Fugate said of the new money announced Monday. He called the $1 billion in total funds “a huge number for pre-disaster mitigation.”

The announcement follows criticism that the Biden administration hasn’t made climate resilience more of a priority.

The administration has moved quickly on climate change, convening a summit of world leaders in April and announcing an aggressive new target to reduce U.S. greenhouse gas emissions by half by 2030, compared with 2005 levels.

But in addition to cutting emissions, experts are increasingly urging the federal government to help prepare communities for the destructive impact of that warming.

The White House has begun to address those concerns. Last week, Mr. Biden signed an executive order that reinstated an Obama-era rule imposing higher standards on federally funded construction in flood zones. (The White House initially said Mr. Biden had reinstated that rule on his first day in office, but later said that wasn’t the case.)

Mr. Biden has also ordered each federal agency to produce plans for adapting to the effects of climate change. And he has asked Congress to provide $50 billion for climate resilience as part of his proposed infrastructure package, which has been the subject of ongoing negotiations between the White House and Senate Republicans.

Still, with hurricane and wildfire season starting, the administration faces some significant challenges when it comes to helping the country both prepare for and recover from natural disasters.

After years of record storms and wildfires, as well as new assignments helping administer coronavirus vaccinations and shelter unaccompanied minors crossing the Southern border, staff at FEMA are worn out, according to current and former personnel. More money for disaster resilience programs will mean more administrative work for FEMA.

And the United States is headed into what experts warn is likely to be an unusually bad summer and fall for disasters.

This year’s hurricane season in the Atlantic, which officially starts on June 1, is expected to be “above normal” and could deliver as many as 10 hurricanes, including three to five major hurricanes of Category 3 or higher, the National Oceanic and Atmospheric Administration warned last week.

And an unusually severe drought across the West has made conditions ripe for wildfires. Already, California has experienced an early start to its wildfire season, with a major fire near Los Angeles forcing the evacuation of 1,000 people this month.

The administration’s goal is “to get ahead of that and work, use every lever we have in government, in coordination with local and state authorities to make sure we’re as prepared as we possibly can be,” Jen Psaki, the White House spokeswoman, told reporters on Monday.