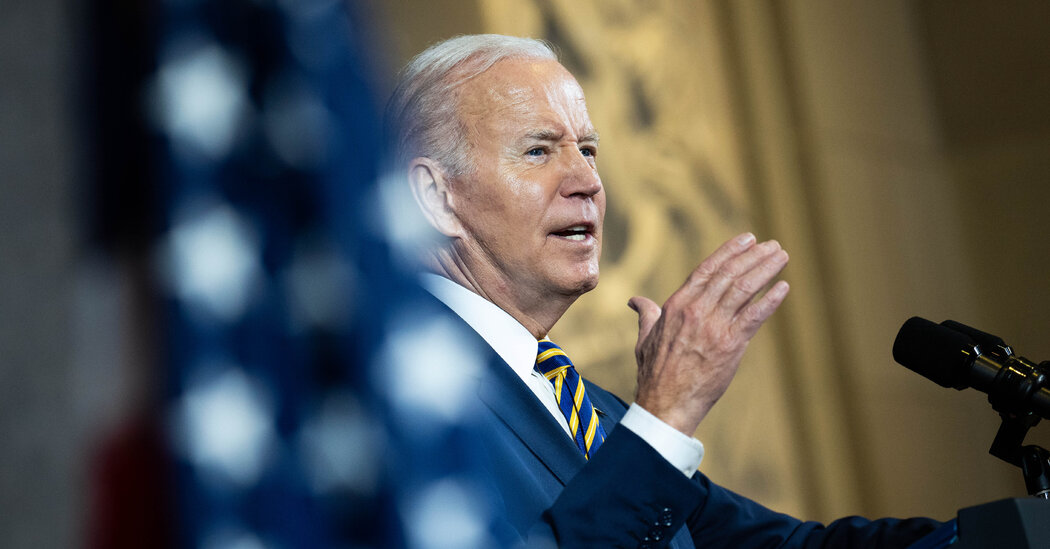 WASHINGTON — President Biden and the Democratic National Committee are moving to radically reorder the party’s presidential process by making South Carolina the first primary state in 2024, followed in order by Nevada and New Hampshire, Georgia and then Michigan.

The plan, announced by party officials at a dinner Thursday in Washington, signals the end of Iowa’s long tenure as the Democrats’ first nominating contest, and it represents an effort to elevate the diverse, working-class constituencies that powered Mr. Biden’s primary victory in 2020.

The move would also be a reward for South Carolina, the state that saved Mr. Biden’s candidacy two years ago after he came in fourth in Iowa and fifth in New Hampshire, both of which are smaller and have a higher percentage of white voters.

“We must ensure that voters of color have a voice in choosing our nominee much earlier in the process and throughout the entire early window,” Mr. Biden wrote in a letter Thursday to members of the D.N.C.’s Rules and Bylaws Committee, a number of whom were stunned by the calendar proposals.

“Black voters in particular have been the backbone of the Democratic Party but have been pushed to the back of the early primary process,” he said. “We rely on these voters in elections but have not recognized their importance in our nominating calendar. It is time to stop taking these voters for granted, and time to give them a louder and earlier voice in the process.”

The letter went on to note bluntly, “Our party should no longer allow caucuses as part of our nominating process.” Iowa is a caucus state and does not hold a primary.

Iowa is still expected to remain the leadoff contest for Republicans, who have agreed to maintain the usual early-state order of Iowa, New Hampshire, South Carolina and Nevada.

Here’s where the president stands after the midterm elections.

Both Iowa and New Hampshire, whose famed diners and town commons are routinely overrun by candidates leading up to their nominating contests, have long promoted themselves as providing demanding tests of a candidate’s authenticity, preparedness and ability to connect in small gatherings with highly discerning voters.

The new Democratic plan, by elevating several larger states, could reduce those opportunities and lead candidates instead to emphasize expensive advertising campaigns aimed at the broadest possible audiences.

“Small rural states like Iowa must have a voice in our presidential nominating process,” said Ross Wilburn, the chairman of the Iowa Democratic Party. “Democrats cannot forget about entire groups of voters in the heart of the Midwest without doing significant damage to the party for a generation.”

The proposal, reported first by The Washington Post, is subject to approval by the party’s Rules and Bylaws Committee and then by the full D.N.C. early next year, and there may be technical and legal considerations for some of the states, including Republican-controlled Georgia. Some of those issues may be matters of discussion as the Rules Committee meets in Washington on Friday and Saturday.

The plan was met with furious pushback from New Hampshire, long accustomed to hosting the first primary as a matter of state law. Statements from several officials suggested a coming clash with the D.N.C., raising questions about how the party will enforce its final order should states try to jump the line.

“I strongly oppose the president’s deeply misguided proposal, but make no mistake, New Hampshire’s law is clear, and our primary will continue to be First in the Nation,” Senator Maggie Hassan, Democrat of New Hampshire, said in a statement.

Ray Buckley, the chairman of the New Hampshire Democratic Party, declared that “we will be holding our primary first.”

And in a joint statement, Senators Catherine Cortez Masto and Jacky Rosen of Nevada raised “serious concerns” about the proposed order, taking implicit swipes at South Carolina’s overall conservative tilt as they argued that the kickoff contest “should be held in a competitive, pro-labor state that supports voting access and reflects all of America’s diversity.”

Nevada legislative leaders said in a statement that “our new presidential primary will be held on Feb. 6 in 2024 and will continue to be held on the first Tuesday in February in future election cycles.”

But the president’s preferences will carry enormous weight with the D.N.C., a group that often functions as the White House political arm. Mr. Biden urged the Rules and Bylaws Committee to review the calendar every four years “to ensure that it continues to reflect the values and diversity of our party and our country.”

After Iowa’s disastrous 2020 Democratic caucuses, in which the state struggled for days to deliver results, the D.N.C. embarked on a protracted effort to reassess how the party picks its presidential candidates. It invited states to apply to host the kickoff primaries amid concerns that Iowa, and to some extent New Hampshire, did not reflect the Democratic Party’s diversity. The initiative led to an intense public and private lobbying effort involving high-ranking party and elected officials up and down the ballot.

The current leadoff states are Iowa, New Hampshire, Nevada and South Carolina, in that order, chosen to represent the four major regions of the country: the Midwest, Northeast, West and South.

Discussions throughout the process have involved several core questions: whether to replace Iowa, and if so, with either Michigan or Minnesota; the order of the early states, as Nevada sought to displace New Hampshire in the first primary; and whether a fifth state should be added to the early cluster.

Earlier this year, the committee adopted a framework that emphasized racial, ethnic, geographic and economic diversity and labor representation; raised questions about feasibility; and stressed the importance of general election competitiveness.

In the battle for the Midwest, some D.N.C. members worried — and Minnesota Democrats have argued — that having a large and expensive state like Michigan host a primary early in the nominating process could lead well-funded candidates to essentially camp out there and ignore the other states on the calendar.

That concern is less urgent, though, if Mr. Biden seeks re-election and avoids a contested nomination. He has said that he intends to run but plans to discuss the race with his family over the holidays and could announce a decision early next year.

Some Democrats have long been intrigued by the idea of promoting Michigan, a critical general election state that is home to diverse voter constituencies and a major labor presence. The Democratic sweep there in this year’s midterm elections helped bolster that idea.

“This president understands that any road to the White House goes through the heartland,” said Representative Debbie Dingell, a Michigan Democrat who was heavily involved in pushing her state’s bid, including by speaking with the White House. But she acknowledged that there were still crucial steps in the process.

“People are going to put up a fight,” she said.