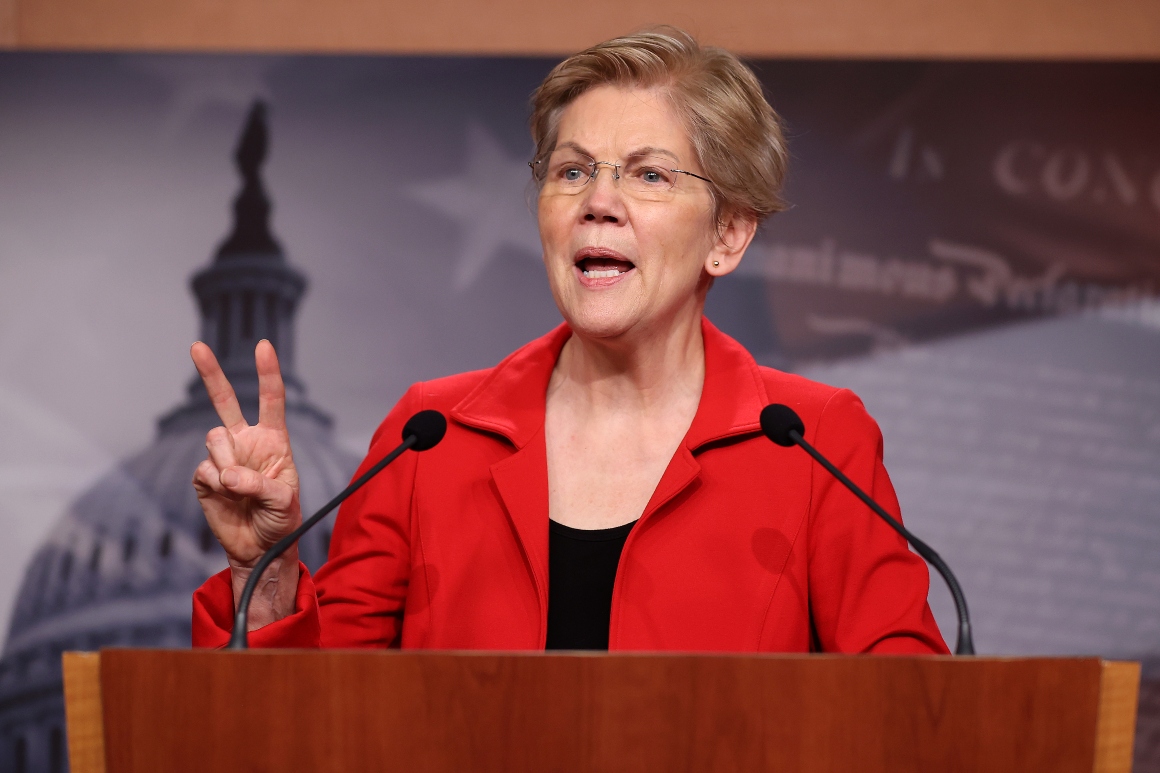 The Biden White House had not outright rejected the idea — at least not publicly — and Treasury Secretary Janet Yellen said earlier this month the administration was undecided on whether to pursue it. That fueled optimism among supporters that some form of a wealth tax would ultimately be used to help pay for Democratic priorities like infrastructure, clean energy, expanded broadband, and hospital and school repairs.

Supporters argue that it would be both lucrative — some economists estimate it could raise about $3 trillion over 10 years — and popular, with polls showing nearly 7 in 10 voters somewhat or strongly supporting the proposal. Indeed, the idea helped fuel Warren’s early rise in the 2020 presidential campaign, as she turned it into a populist campaign theme that had crowds chanting “two cents!” at her events.

The White House is expected, instead, to turn to a variety of other pay-fors including a hike in the corporate rate, the ending of federal fossil fuel subsidies and a push to end offshore tax havens for corporations.

While Biden opposed Warren’s structuring of the tax during the campaign, he has latched onto redistributive tax policy as a larger concept. Though their plans to address the problems differ, the president shares Warren’s view “that middle class families are paying more than their fair share, and those at the top are not doing their part,” a Biden administration official said.

“We have to start rewarding work, not just wealth,” Biden said on the campaign trail.

Inside the White House, the idea that Biden would embrace Warren’s approach after plainly rejecting it during the campaign was difficult to square. Biden aides also don’t see any political risk in casting a wealth tax aside, noting that he supports several tax hikes on the wealthy already, according to several people familiar with his thinking. Taking steps to hike capital gains and estate taxes or raise the top individual income tax rate, for example, would target rich Americans while avoiding a fight over the wealth tax itself.

Biden and Warren also agree on some other measures to increase taxes on the rich, a Warren spokesperson noted, including through eliminating the stepped-up basis loophole that can allow the wealthy to pass fortunes to heirs tax-free. Warren will also continue to push the White House and Treasury Department on her wealth tax proposal, the spokesperson said.

“The bottom line is Democrats seem to no longer be afraid of taxing the rich in a major way, and to be very blatant about the fact that we’re raising taxes on the rich,” said Adam Green, co-founder of the Progressive Change Campaign Committee. “That’s a sea change from where we were just a few years ago.”

While there has been widespread interest in the idea of a wealth tax, there is real concern on Capitol Hill that implementing it as Warren has proposed would prove unconstitutional — and that federal courts stacked with Donald Trump-appointed judges would be unlikely to rule in the Biden administration’s favor on the issue. One Democratic aide said the White House was hesitant to throw its weight behind the idea when it could lean on other pay-fors that the majority of lawmakers are more comfortable with.

There is some skepticism, too, that a wealth tax would raise the $3 trillion that Warren talks about because of how difficult it would be to accurately measure Americans’ wealth each year — and how easy it could be for rich families to hide their assets. One paper from last year, led by Matthew Smith of Treasury, projected a Warren-style wealth tax would have raised $117 billion in 2016, seemingly well short of other estimates.

The revenue proposals Biden has embraced, meanwhile, are still designed to eliminate or reduce “this issue of people accumulating large amounts of wealth over time that is never subject to taxation,” said Sharon Parrott, the president of the Center on Budget and Policy Priorities.

“There are lots of different mechanisms to do it,” Parrott said. “The important thing is that we actually do it.”