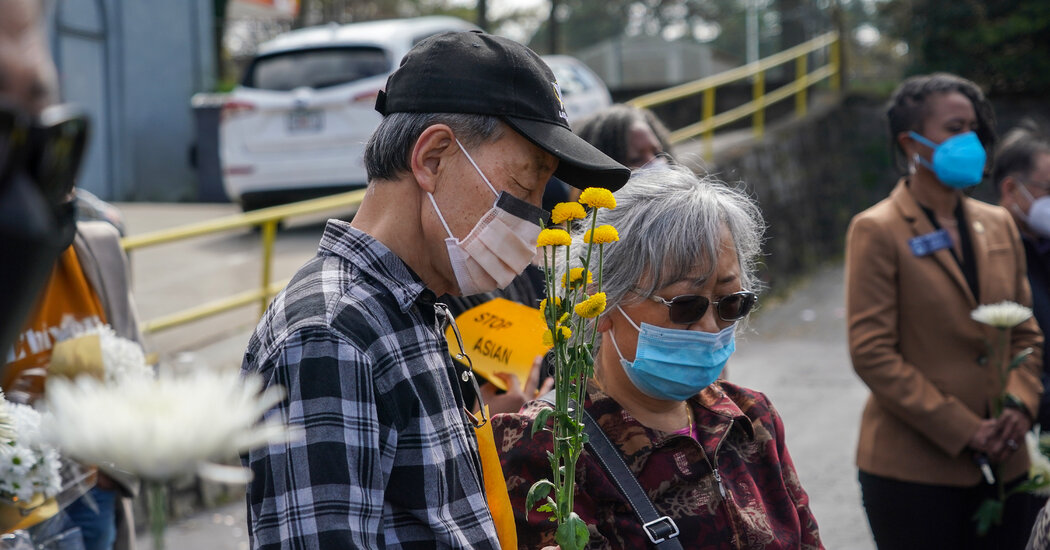 The Justice Department will also review for the next month how it can better crack down on violent acts against people of Asian descent in the United States, including by prioritizing prosecution of those who commit hate crimes.

The steps by the federal government to combat racist violence came a day after a man was captured on surveillance video in New York stomping on a 65-year-old Filipino woman while making anti-Asian remarks. Mr. Biden also traveled to Atlanta this month to express grief for victims of a mass shooting in which a gunman killed eight people, six of whom were women of Asian descent.

“We can’t be silent in the face of rising violence against Asian Americans,” the president wrote on Twitter on Tuesday, adding, “These attacks are wrong, un-American, and must stop.”

Quelling an increase in racist acts, including violent attacks against Asian-Americans and Pacific Islanders, has been one of the early challenges of Mr. Biden’s presidency. In his first week in office, he condemned the xenophobia against Asian-Americans and Pacific Islanders and directed the Health and Human Services and Justice Departments to develop ways to combat racist actions. The details released by the White House on Tuesday were the next step in carrying out plans to address the problem.

The administration said in a statement that it would expand a White House initiative on Asian-Americans and Pacific Islanders that had previously worked to provide economic opportunities to the communities by mandating that the group also counter anti-Asian violence. Mr. Biden will also appoint a White House official to review policies across the government affecting Asians, Hawaiians and Pacific Islanders.

As part of Mr. Biden’s stimulus relief package, the Department of Health and Human Services also established grants for survivors of domestic violence and sexual assault who may struggle to get help because of language barriers.

The Justice Department will publish a new hate crimes page with a focus on attacks against Asian-Americans and Pacific Islanders, and the F.B.I. will soon hold civil rights training events to encourage reporting of hate crimes. Language barriers and concerns over questions of immigration status have made some victims reluctant to report crimes in the past.

Attorney General Merrick B. Garland told Justice Department employees on Tuesday that the rise of reported hate crimes required “renewed energy and emphasis on investigation and prosecution, increased community outreach and the improved collection of data critical to understanding the evolving nature and extent of hate crimes.”

As part of the Justice Department’s 30-day review, officials will also consider how prosecutors can use civil penalties to address acts of bias that do not rise to the standard of a hate crime. Hate crime charges can be difficult to prove in court.

In some states, including New York, prosecutors need to show that victims were specifically targeted because of their race. Experts have said that establishing such a motive for attacks against Asians is even more challenging because there is no widely recognized symbol of anti-Asian hate, such as a noose or a swastika.

“Hate crimes persist and continue to have a toxic effect on our society,” Mr. Garland wrote in a memo.

Many Democrats have suggested that President Donald J. Trump bears some responsibility for the surge in anti-Asian attacks. They say Mr. Trump fanned anti-Chinese sentiment in particular throughout the pandemic last year, calling the coronavirus the “China virus.”

The Biden administration’s response won praise from members of Congress, including Senator Mazie K. Hirono, Democrat of Hawaii, who along with Senator Tammy Duckworth of Illinois criticized the administration last week for lacking Asian representation at its highest levels.

“Racism is never far below the surface in our country, which is all too evident as the A.A.P.I. community has experienced escalating attacks and targeted violence during the pandemic,” Ms. Hirono said, referring to Asian-Americans and Pacific Islanders. “We must confront the systems that have allowed this hatred to fester and spread, and today’s clear demonstration of presidential leadership is a critical step forward.”