Biden Aims to Boost Military and Social Spending in 2023 Budget 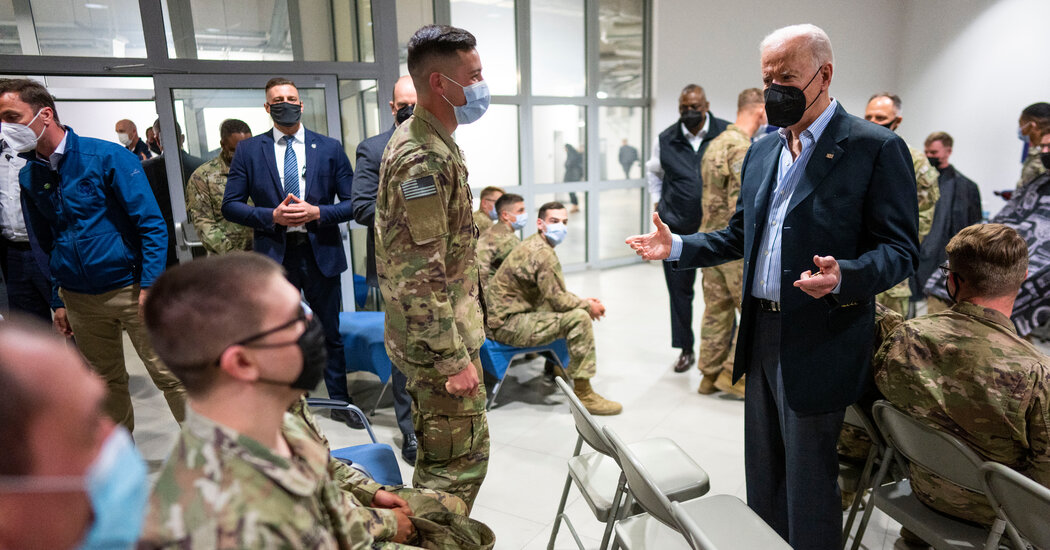 WASHINGTON — President Biden’s fiscal 2023 budget will call for additional military spending in the face of Russian aggression toward Ukraine, domestic funding for child care and climate resilience, and new taxes on the wealthiest Americans.

The proposal, which will be released on Monday, could be the last salvo of Mr. Biden’s legislative agenda, as Democrats face the prospect of losing control of Congress in what are expected to be bruising midterm elections.

Mr. Biden plans to ask Congress to help his administration tackle some of the biggest concerns facing voters, including soaring inflation that has dented consumer confidence and is contributing to an overall sense of economic malaise. A senior administration official said that the president’s budget would propose policies “that will reduce energy, health care, child care and other costs for families,” though it is unclear exactly what the White House will propose.

The budget will also seek additional funding to help combat the international crisis created by Russia’s invasion of Ukraine, which threatens to slow the global economy.

Mr. Biden will request $813.3 billion in national security spending, an increase of $31 billion, or 4 percent, from 2022, according to people familiar with the proposal. Funding for the Defense Department will also include $4.1 billion to conduct research and develop defense capabilities, nearly $5 billion for a space-based missile warning system to detect global threats and nearly $2 billion for a missile defense interceptor to protect the United States against ballistic missile threats from states like North Korea and Iran.

The budget, which is simply a request to Congress and is not binding, will also offer an update on how the administration plans to advance the spending and tax priorities included in Mr. Biden’s Build Back Better plan, which had to be scaled back last year amid resistance from moderate Democrats like Senator Joe Manchin III of West Virginia.

It is unclear whether the president’s budget proposal will simply outline the administration’s policy priorities or include a plan to pass his agenda through a slim majority in Congress. One White House official said the budget would echo Mr. Biden’s State of the Union address, which focused primarily on Russia’s invasion of Ukraine and listed his domestic policy proposals without mentioning the label Build Back Better, which some in the White House have viewed as a hindrance to negotiations.

“You try to use a budget to indicate how you’re moving forward in a negotiation to actually getting something done while also telling your base here’s what we truly believe,” said Jason Furman, an economist at Harvard University and a former Obama administration economic adviser. “And the difficult thing is the challenge is always how to thread those two.”

The White House will for the first time propose that Veterans Affairs medical funding be given its own discrete stream of funding. The administration plans to use the budget proposal to send a message to Congress that funding for veterans deserves the same sense of urgency as investments in national security, according to officials familiar with the matter.

The proposal also aims to cut federal deficits by a total of more than $1 trillion over the next decade, according to a White House document released on Saturday.

As part of that plan, the budget will outline a minimum tax on billionaires, which would require that American households worth more than $100 million pay a rate of at least 20 percent on their income as well as unrealized gains in the value of their liquid assets, such as stocks and bonds, which can accumulate value for years but are taxed only when they are sold. That revenue could also be directed toward the president’s broader agenda.

Cecilia Rouse, the chair of the White House’s Council of Economic Advisers, said last week that Mr. Biden still wanted to invest in improving access to child care, prescription drugs and health care as well as combating climate change, without adding to the federal deficit.

“The president isn’t just looking to make these kinds of investments as stimulus, meaning that they’re deficit financed, he is committed to deficit reduction along the way as well,” Ms. Rouse said at the National Association for Business Economics conference. “And that’s what will be reflected in his budget.”

Economists will also be monitoring the White House’s projections for economic growth and inflation, which is at its highest level in 40 years. The forecasts could also come with political implications.

“Too low an inflation estimate and it won’t be believable, but too high and it will become political ammunition for Republicans,” analysts at Beacon Policy Advisors wrote in a note to clients.

Treasury Secretary Janet L. Yellen acknowledged on Friday that the global economy is facing headwinds and that Russia’s invasion of Ukraine could amplify inflationary pressure around the world on energy and food prices. But she predicted that the U.S. economy remains well situated despite those concerns.

“Growth over the last year has been extraordinary; job creation remains very high,” Ms. Yellen told CNBC. “When you look at the balance sheet of the typical American family, it is in very good shape.”