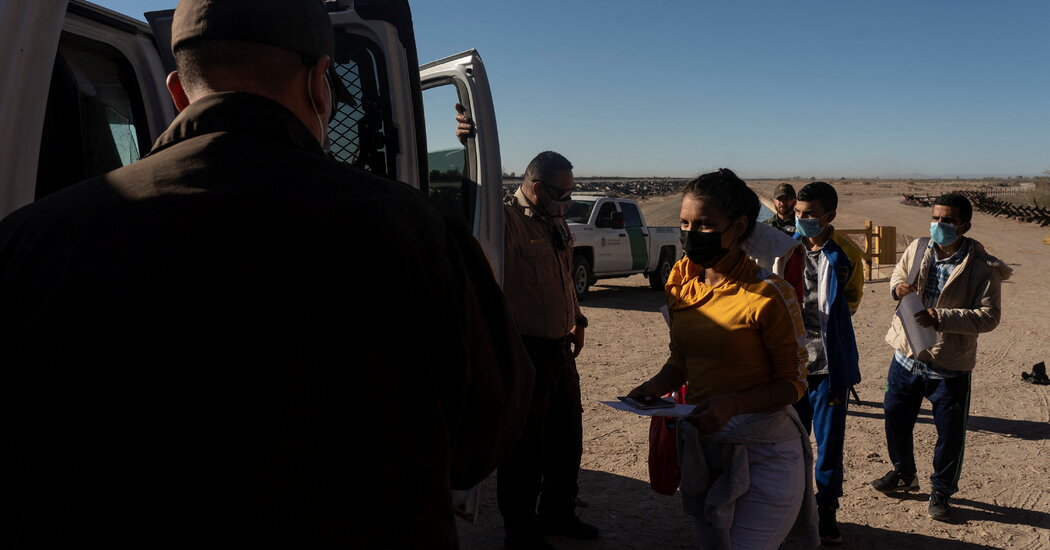 WASHINGTON — The Biden administration is requiring coronavirus vaccines for some undocumented migrants at the southwest border, a policy change that comes days before the administration’s next review of a public health order that has limited immigration during the pandemic.

Under the plan, officials will start vaccinating undocumented migrants without proof of vaccination who are apprehended by border officials, but not expelled under the public health order, in seven areas including San Diego, El Paso and the Rio Grande Valley. A description of the plan was shared with The New York Times.

According to directions given to senior homeland security officials on Sunday, if single adults refuse to be vaccinated, they will be detained and put into deportation proceedings. If they request asylum and cannot remain in detention, they will be released with a monitoring device “with stringent conditions.” If migrant families refuse vaccination, they will also be given monitoring devices with the same conditions.

The White House has said little about whether it will soon lift the public health order, which the Trump administration put in place at the start of the pandemic. The order, known as Title 42, gives border officials the authority to turn back migrants seeking to enter the United States so that they do not spread the coronavirus here, a precaution that public health experts have called unnecessary.

The Centers for Disease Control and Prevention is supposed to review whether the rule is still necessary at this stage in the pandemic, and issue a decision in the coming days.

The administration’s decision to start vaccinating some undocumented migrants appears to be an acknowledgment that there are measures other than the public health order that can be taken to minimize the spread of the coronavirus across borders.

A Department of Homeland Security spokesman said vaccinating immigrants in the department’s custody is a “public health best practice.” The spokesman did not explain why the department had waited so long to put that practice in place with regard to undocumented migrants, many of whom come from Central America. Planning for these vaccinations has been in the works. In November, the administration put out a request for a short-term contract to provide Covid-19 vaccinations at points along the southwest border.

Previously, the administration has resisted vaccinating undocumented immigrants, despite multiple proposals from the Department of Homeland Security over the past year on how to do it. President Biden’s domestic policy adviser, Susan Rice, has privately raised concerns that it would provide an incentive for more undocumented migrants to try to cross the border, according to three current and former government officials with knowledge of the ongoing discussions, who spoke on condition of anonymity to discuss internal deliberations.

“Based on our work in the regions and places that people are coming from, that would have absolutely nothing to do with people coming,” he said. “People have access to vaccines. They are coming because they’re fleeing persecution.”

Inside the Homeland Security Department, officials have been planning for Title 42 to end in early April. They expect large crowds of migrants as a result, exceeding the already-high numbers that have been crossing without documentation in recent weeks.

Since President Biden has been in office, there has been a significant spike in the number of migrants crossing the southwest border, many fleeing poverty and persecution. The administration has used the public health rule to expel migrants a little more than half of the time, allowing in others with humanitarian exemptions.

Migrant children who arrive at the border without a parent or guardian have been exempted from the rule and allowed to enter. The administration has been offering vaccinations to eligible migrant children in government shelters for months; Immigration and Customs Enforcement has also been offering vaccinations to immigrants in detention. And the administration has been vaccinating asylum-seeking migrants who are waiting in Mexico until the United States makes a decision on their case.

Amesh Adalja, a senior scholar at the Johns Hopkins Center for Health Security, said vaccinations should have been offered to all undocumented migrants apprehended on American soil.

“There’s no actually valid argument to not vaccinate people at the border, especially when our vaccination rates are the lowest that they’ve been in the United States and we’re actually throwing vaccine in the trash,” Dr. Adalja said. “If they don’t do this, they would rather put vaccine in the trash can than put it into a migrant’s arm, is basically what that amounts to.”

Critics of the order say it is being used to control the influx of undocumented migrants. The Biden administration, which has relied heavily on scientific evidence to justify many other health precautions during the pandemic, has not produced data that shows undocumented migrants play a significant role in spreading the coronavirus.

In a ruling regarding the use of the policy, a panel of judges on the U.S. Court of Appeals for the District of Columbia Circuit noted the lack of data.

“We are not cavalier about the risks of Covid-19. And we would be sensitive to declarations in the record by C.D.C. officials testifying to the efficacy” of the public health order, the panel wrote earlier this month. “But there are none.”

They added: “From a public-health perspective, based on the limited record before us, it’s far from clear that the C.D.C.’s order serves any purpose.”

The White House and Homeland Security Department have consistently said the public health order is issued at the sole discretion of the Centers for Disease Control and Prevention.

“It is not a matter of immigration policy,” Alejandro N. Mayorkas, the Homeland Security secretary, said on March 17. The C.D.C. determines the order’s necessity, he said, “on a public health basis, depending on where we are in the arc of the Covid-19 pandemic.”

Mr. Mayorkas pointed to the spread of variants in other countries. While Covid case numbers are falling in most of the United States, an Omicron subvariant, BA.2, is fueling an increase in cases in Europe and could cause another surge here, although it does not appear to be causing widespread severe illness.

The administration has been fighting in court to keep the public health order in place for migrant families, even though many are already exempted from it. The same appeals panel that noted earlier this month that the C.D.C. had not presented any evidence justifying the order also ruled that the administration could not use it to expel families to countries where they would face persecution or torture.

Lawyers were supposed to file a status update last week, but instead asked for an extension until after the C.D.C. decides whether to keep the rule in place.