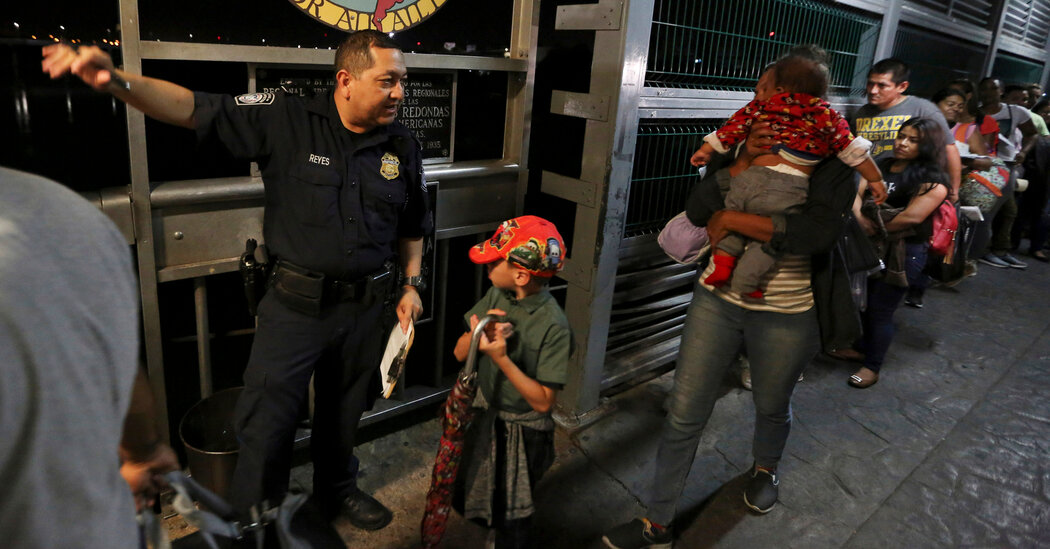 WASHINGTON — The Biden administration has finalized a plan to overhaul the system for immigrants seeking asylum in the United States, aiming to take a burden off the backlogged immigration courts in what some experts see as the most sweeping change to the process in a quarter-century.

Under the new policy, which the administration released on Thursday as an interim final rule, some migrants seeking asylum will have their claims heard and evaluated by asylum officers instead of immigration judges.

The goal, administration officials said, is for the entire process to take six months, compared with a current average of about five years. The plan is to release many asylum seekers through a parole status while they go through the process, which critics say will draw even more hopeful migrants to the border. In recent weeks, border officials have been apprehending more than 13,000 undocumented migrants a day, according to internal data shared with The New York Times.

Mr. Biden pledged to “restore humanity” to the asylum system after four years of restrictive measures put in place by President Donald J. Trump. But the need to fix the overburdened system, where more than 670,000 cases were pending in immigration court alone at the end of February, long predates the last administration.

The new rule comes at a critical time, as border officials try to manage a record number of migrants crossing the southwestern border. Thousands of undocumented migrants are already being released into the country, sometimes daily, many with plans to apply for asylum.

“It very well could be one of the most significant reforms to the asylum system in a long time, going beyond undoing the Trump administration’s attempts to limit access to asylum, and actually institute meaningful structural reforms,” said Austin C. Kocher, a geographer at Syracuse University who analyzes immigration enforcement data.

The final rule did not change substantially from the version proposed in August, which drew more than 5,000 public comments.

Officials from the U.S. Citizenship and Immigration Office and Executive Office for Immigration Review, where asylum cases are handled, spoke to reporters on the condition of anonymity on Wednesday and said the process would be rolled out slowly. They did not answer questions about where it would begin or how many migrants would be involved.

For the plan to be fully operational, the government needs to hire hundreds of new asylum officers in order to handle about 75,000 asylum seekers a year.

“Through this rule, we are building a more functional and sensible asylum system to ensure that individuals who are eligible will receive protection more swiftly, while those who are not eligible will be rapidly removed,” Alejandro N. Mayorkas, the homeland security secretary, said in a statement.

Adding fewer cases to the immigration court system will help by contributing less to the backlog. Asylum cases make up about 40 percent of the 1.7 million case backlog.

Many immigration advocates raised concerns about rushing migrants through the process and denying them due process.

There are also concerns that the plan will involve what many advocates say is a flawed and unfair process known as expedited removal. That was established in a 1996 law that gave immigration officials the authority to deport people without a hearing or a lawyer if they did not express a fear of returning to their country.

In the expedited removal process, border officials ask migrants if they are afraid to return to their own countries. Migrants who say they have a fear of returning are scheduled for a “credible fear” interview with an asylum officer.

Until now, migrants who passed those interviews joined many others waiting in the United States for years to appear before an immigration judge and officially apply for asylum. But under the new plan, migrants who pass the initial screening will then make their case to an asylum officer, a process considered less confrontational than going before a judge and facing government prosecutors.

According to a government analysis, the number of migrants in expedited removal proceedings who claimed they were afraid to return to their country has increased over the years. In 2006, for example, 5 percent asked for credible fear interviews; in 2018, 42 percent did.

Andrew R. Arthur, a resident fellow for law and policy at the Center for Immigration Studies, said the number grew because of a decision in 2009 to release asylum seekers caught at the border on parole while they go through the process.

“People knew that if you made a credible fear claim, you’re going to be released,” Mr. Arthur said, explaining why he thought the new rule would draw more migrants to the southwest border.

Since Mr. Biden took office, the number of migrants caught crossing the border has risen significantly compared with some previous years. Many are fleeing violence and persecution in Central America. But people have been coming from around the world, in some cases in search of economic opportunity after the coronavirus pandemic cost hundreds of millions of jobs.

The new rule will go into effect 60 days after it is published in the Federal Register. During that time, the administration said it would accept new comments.

For now, potential asylum seekers face an additional hurdle: a pandemic-related public health order from the Centers for Disease Control and Prevention that gives border officials the authority to expel migrants at the border, denying them the chance to ask for asylum. That will continue to be the policy for as long as the public health rule is in place, Mr. Mayorkas said recently.