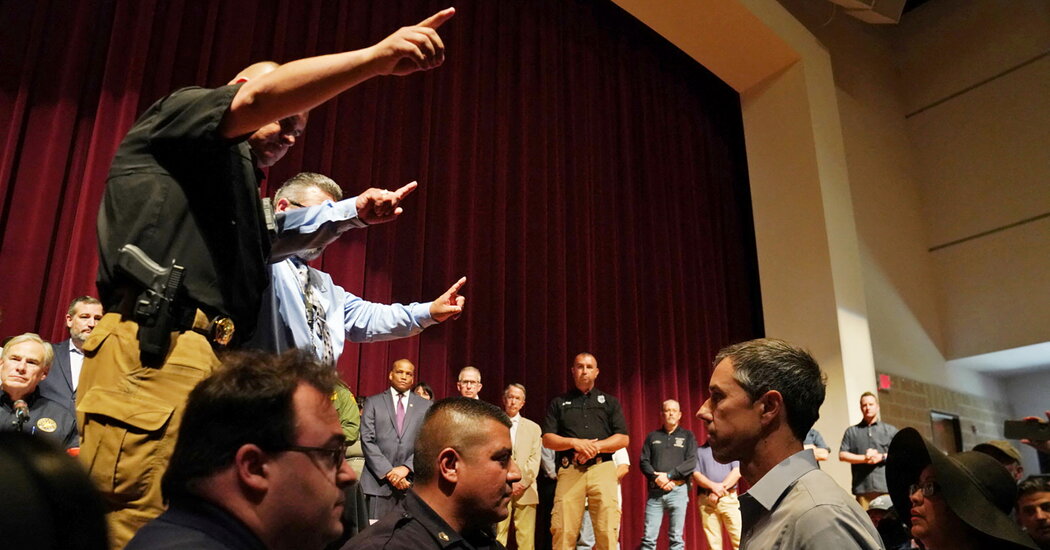 Former Representative Beto O’Rourke interrupted a news conference held by Gov. Greg Abbott of Texas on Wednesday to accuse Republicans of “doing nothing” to address gun violence in the aftermath of a shooting at an elementary school in Uvalde.

Mr. O’Rourke, the Democrats’ nominee for governor, stood in front of a stage at a Uvalde High School auditorium during the news conference and shouted that the killings were a “totally predictable” result of lax state and federal gun laws.

One official ordered the El Paso native to “Shut up!” The state’s lieutenant governor, Dan Patrick, told him, “You’re out of line and an embarrassment.” The mayor of Uvalde, Don McLaughlin, said he could not believe Mr. O’Rourke was the type of “sick” individual who “would come to a deal like this to make a political issue,” using an obscenity.

Moments later, uniformed security guards pulled Mr. O’Rourke away. On his way out, he could be heard telling the audience, some of whom were jeering him while others yelled to let him speak, “Somebody needs to stand up for the children of this state, or they will continue to be killed.”

Reporters followed him outside the building, where he continued to lament Republicans’ lack of action. Reporters who tried to return to the briefing were barred at the door by uniformed officers who said they were acting on orders of a school official.

To Republicans, he was exploiting a tragedy in front of the cameras as he tried to draw attention to his long-shot bid for governor against Mr. Abbott, after unsuccessful presidential and Senate campaigns.

“It’s sad that a desperate candidate would use a tragedy to generate relevance and raise ActBlue money for another losing campaign,” said Jesse Hunt, a spokesman for the Republican Governors Association, referring to ActBlue, the Democrats’ digital fund-raising platform.

Guy Harrison, a Republican consultant who is originally from Dallas, called Mr. O’Rourke’s interruption a “political Hail Mary” to shore up liberal support before the general election in November. He added, “There’s time and space to have politics. That was obviously not the time and space.”

For Democrats, however, Mr. O’Rourke embodied a desperation in their efforts to push for gun control, as a former congressman resorted to a more confrontational protest tactic. Matt Angle, the founder of a PAC that supports Democratic candidates in Texas, argued that it was Republicans who were putting on a political show, not Mr. O’Rourke.

Mr. Angle referred to Mr. Abbott’s attire at the news conference — he wore a collared shirt with his name stitched onto it, similar to the one he wore during the response to Hurricane Laura in 2020 — as a costume.

He said the political issue was no longer just about guns. “It’s about keeping kids safe,” he said.

Mr. Abbott has been one of the most pro-gun governors in the country. He signed a wide-ranging law in 2021 that ended the requirement for Texans to obtain a license to carry handguns, allowing virtually anyone over the age of 21 to carry one.

Jana Lynne Sanchez, a Democratic activist in Tarrant County and a former congressional candidate, said that after watching the exchange, she immediately bought an O’Rourke lawn sign.

As Mr. O’Rourke tries to become the first Democratic governor of Texas in decades, the issue of gun control poses problems for him.

In a 2020 presidential debate, Mr. O’Rourke said, “Hell yes, we’re going to take your AR-15, your AK-47.” Those comments, directed toward a national audience, complicated his campaign for governor and put his electability at risk in Texas, a gun-friendly state where many Democrats and Republicans carry concealed handguns or keep firearms at home or in their vehicles. Since then, Mr. O’Rourke had seemed to walk back his threat to confiscate weapons.

“I’m not interested in taking anything from anyone,” Mr. O’Rourke said at a news conference in February, in response to questions from The New York Times. “What I want to make sure we do is defend the Second Amendment.”

But by showing up at the Uvalde news conference to confront the state’s Republican leadership on Wednesday, he appears to be making gun violence and gun control a new focal point of his campaign following the school shooting, after spending months trying to pivot attention away from his “Hell yes” comment about taking AR-15s and AK-47s.

“The time to stop the next shooting is right now, and you are doing nothing. You are offering us nothing. You said this was not predictable — this is totally predictable when you choose not to do anything,” he said.

After Mr. O’Rourke had left the auditorium, Mr. Abbott criticized him for the outburst.

“There are family members who are crying as we speak,” he said. “Think about the people who are hurt and help those who are hurt.”