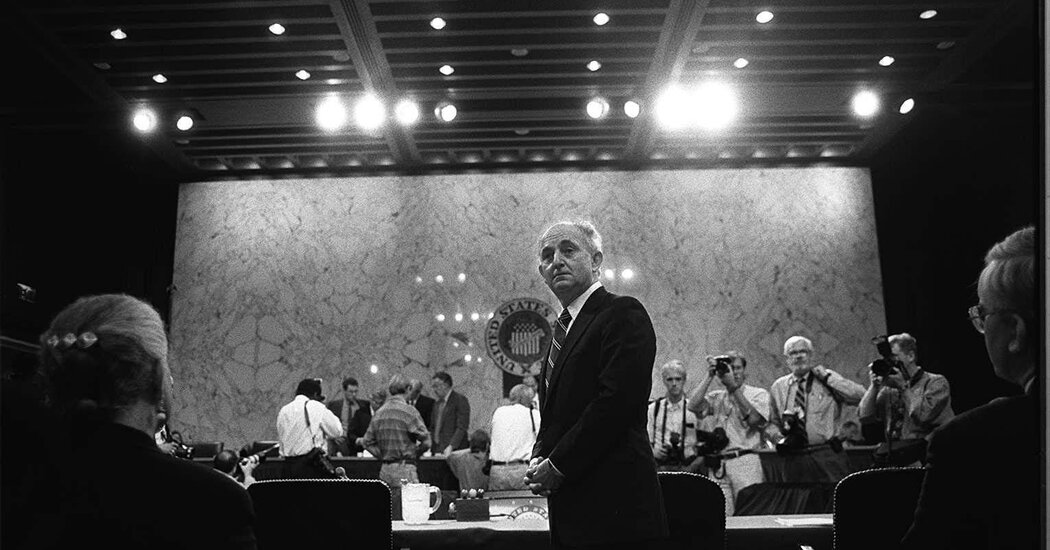 Bernard W. Nussbaum, who as President Bill Clinton’s first White House counsel became a lightning rod in a rash of bitter controversies that plagued Mr. Clinton early in his administration, died on Sunday at his home in Manhattan. He was 84.

The cause was heart disease, his son Frank said.

Mr. Nussbaum was a corporate lawyer in New York and an old friend of the first lady, Hillary Clinton, when her husband named him to the counsel post after being elected as a Democrat to his first term in 1992.

Mr. Nussbaum served for 14 months, resigning at Mr. Clinton’s request amid relentless attacks on the Clintons over a series of imbroglios, starting with a failed Arkansas land venture in which they had taken part years before they reached the White House — an episode known as the Whitewater affair. Then came the suicide of the deputy counsel, Vincent W. Foster Jr., giving rise to official inquiries and fevered conspiracy theories. And finally there was the F.B.I.’s agreement to a White House request for files on dozens of Republicans whom the bureau had screened for White House jobs in past administrations.

The episodes drew accusations of wrongdoing from Republican critics and right-wing enemies of the Clintons as well as expressions of concern by many people without a partisan or ideological agenda. And Mr. Nussbaum’s aggressive efforts to protect the president and first lady only added fuel to the attacks and doubts.

His critics accused him of obstructing justice. His supporters backed his argument that he was doing what any good lawyer would do in fighting to protect a client.

But even some of his supporters said that Mr. Nussbaum — a fast-talking New Yorker whose tough legal tactics had made him highly prized by corporate clients in high-stakes litigation — had failed to recognize a key reality: that fiercely insisting on a client’s privacy rights and nondisclosure privileges could be shortsighted when the client was a top elected official seeking the public’s trust.

After departing from the White House, Mr. Nussbaum agreed that the legal playing field he had encountered in Washington was far different from the one on which he had thrived in his home city, New York.

There, he said, lawyers focused on fighting to the fullest for their clients, but in Washington the main concern was how things looked. And in Washington, he said, opponents wanted to “beat you into the ground, destroy you, suck out your blood.”

Bernard William Nussbaum was born in Manhattan on March 23, 1937, to Feivel and Molly (Weintraub) Nussbaum, immigrants from Poland. He grew up on the Lower East Side of Manhattan. His father was a garment presser who became a union business manager, and he had met Molly, who worked in a different garment factory, through the labor movement.

Mr. Nussbaum graduated from Stuyvesant High School, from Columbia University, in 1958, and from Harvard Law School, in 1961.

In 1963, he married Toby Sheinfeld, who died in 2006. He married Nancy Kuhn in 2008. She died last year. In addition to his son Frank, Mr. Nussbaum is survived by another son, Peter; a daughter, Emily Nussbaum, the television critic for The New Yorker; a stepson, Bill Kuhn; a brother, Martin; and six grandchildren.

After law school, Mr. Nussbaum was an assistant United States attorney in Manhattan for several years before joining the New York law firm of Wachtell, Lipton, Rosen & Katz in 1966.

He briefly returned to the public arena in 1974, when he served as a senior counsel on the House of Representatives Judiciary Committee as it investigated the Watergate scandal. It recommend that the House impeach President Richard M. Nixon, but Nixon resigned before the House could act. While working for the committee, Mr. Nussbaum befriended one of the young lawyers assisting him, Hillary Rodham, the future first lady.

After his committee work he returned to his law firm in New York and remained in private practice until Bill Clinton brought him to the White House almost 20 years later.

The Whitewater controversy stemmed from an ultimately unsuccessful land-development partnership that the Clintons entered into in 1979, while Mr. Clinton was governor of Arkansas, with the owner of a savings and loan association, James B. McDougal, and his wife, Susan McDougal.

After Mr. Clinton became president, the Clintons’ roles in the venture became a focus of scrutiny and accusations. Among the issues were whether they had been involved in their partners’ illegally channeling money to the financially sinking enterprise and whether Mr. Clinton had personally benefited from those moves. The Clintons denied involvement in the frauds, or any knowledge of them as they were occurring; they said they had lost tens of thousands of dollars in the project.

Mr. Nussbaum was criticized for suggesting that the Clintons resist turning over Whitewater-related documents to investigators. The critics also contended that private meetings that Mr. Nussbaum had with Treasury Department officials during an investigation into the savings and loan amounted to White House interference with the inquiry, out of concern, the critics said, over what investigators might find out about the Clintons’ ties to the S&L.

Mr. Clinton “asked me to resign in response to media and political pressure,” Mr. Nussbaum told The New York Times in 2001. There had been “lots of innuendo in the press” and “phantom scandals,” he said.

The Whitewater inquiry was pursued initially by a special prosecutor appointed by Attorney General Janet Reno and later primarily by Kenneth W. Starr, a Republican appointed by a three-judge panel. The Clintons were never charged with any crimes, though it was Mr. Starr’s contention that Mr. Clinton had obstructed the investigation.

The McDougals and 12 others were ultimately convicted in the affair. President Clinton pardoned Ms. McDougal before he left office in 2001. Mr. McDougal died in a prison medical facility in 1998.

Mr. Foster was found fatally shot, gun in hand, in a suburban Virginia park in July 1993, and the Justice Department began an investigation. Conspiracy theories soon began to surface.

Some of the most zealous contended that Mr. Foster had been murdered and that his body had been moved to the park to stage it as a suicide because, the theory went, as a former partner of Mrs. Clinton’s in a Little Rock law firm that had performed work for the savings and loan, he had information that would tie the Clintons to Whitewater criminality.

The conspiracy theories only accelerated when Mr. Nussbaum sought to restrict Justice Department access to Mr. Foster’s office files. But testifying before one of many congressional panels he faced during his tenure, he contended that he had been ethically obligated to review the files before showing them to the investigators and to hold back any that contained sensitive White House material unrelated to the death.

On that and other “big calls” he had made, Mr. Nussbaum declared to his often hostile questioners, “I made the right calls.”

Mr. Starr and his predecessor as special counsel, Robert B. Fiske Jr., both found after separate inquiries that Mr. Foster had killed himself in the park because he was deeply depressed amid the growing pressures of his job.

The furor over the F.B.I.’s personnel files arose when the White House Office of Personnel Security successfully requested confidential background reports on individuals then working in the White House as well as on dozens of figures who had held posts there in previous Republican administrations. The request forms bore Mr. Nussbaum’s preprinted name.

The White House said the security office’s acquisition of the files had been an innocent mistake, and Mr. Nussbaum said he had not known the office was doing this. But a House committee chairman accused him of lying to the panel about circumstances surrounding the hiring of the office’s director. In 2000, Robert W. Ray, who succeeded Mr. Starr as special counsel, announced that no criminality had been found in the request for the files, and that Mr. Nussbaum had not committed perjury.

Mr. Nussbaum was long gone from the White House and back at the Wachtell, Lipton law firm in New York when Mr. Clinton was impeached and acquitted in his second-term scandal stemming from his affair with a White House intern.

In the interview with The Times in 2001, Mr. Nussbaum said he had no regrets about his turbulent time in Washington. “It was,” he said, “a great adventure.”