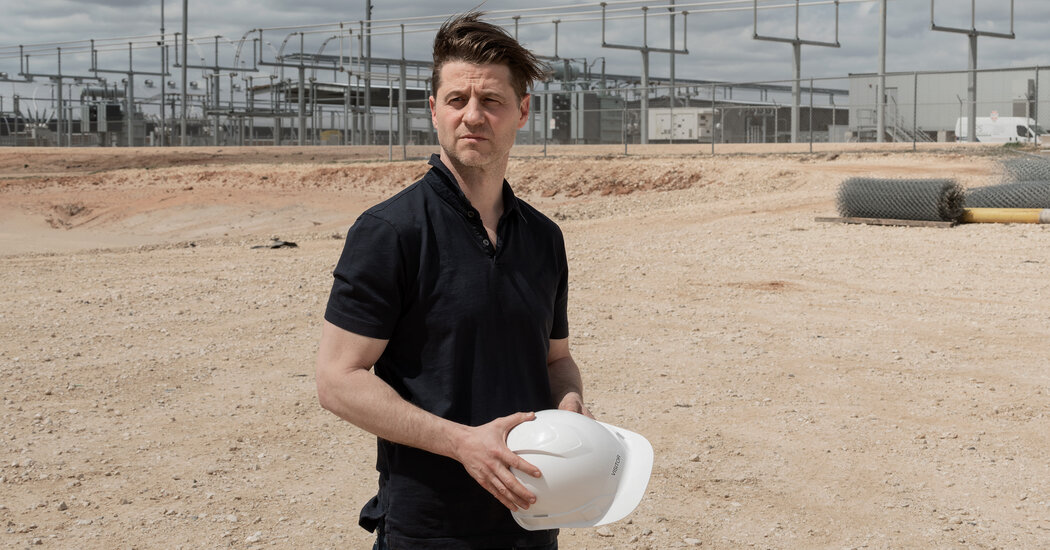 ROCKDALE, Texas — Ben McKenzie was driving his father’s silver Subaru through Texas farmland, talking in breathless bursts about money: who has it, who needs it, what makes it real or fake. He detailed the perils of cryptocurrency exchanges, the online brokers that sell Bitcoin and Ether to speculators, then delivered a glowing endorsement of “Capital in the Twenty-First Century,” a 700-page book by the economist Thomas Piketty about income inequality and the power of wealthy capitalists.

“If they can make money on it, they’ll do it,” Mr. McKenzie, 43, said as he sped past cattle farms and run-down gas stations one morning in March.

Mr. McKenzie was on his way to Whinstone U.S., a crypto mining operation about an hour outside Austin, where rows of energy-guzzling machines generate new Bitcoins. Over the last six months, as A-list celebrities have shilled for digital currencies and NFTs, Mr. McKenzie, a TV actor best known for his starring role in “The O.C.,” has become an outspoken skeptic. He’s written critically about the #ad for little-known coins that Kim Kardashian posted on Instagram and earnestly asked Reese Witherspoon to stop proselytizing about the metaverse, all while acknowledging that he’s not a financial expert.

Mr. McKenzie rose to prominence in the early 2000s playing Ryan Atwood, a brooding, musclebound teenager from the wrong side of the tracks who moves in with a wealthy family in Newport Beach, Calif. After “The O.C.” wrapped, he went on to star in two other TV dramas, “Southland” and “Gotham,” both of which ran for five seasons.

But acting work dried up during the pandemic, and like many people, Mr. McKenzie soon found himself sucked down a crypto rabbit hole. After a couple of friends encouraged him to invest, he took a 24-part online course on cryptocurrencies taught by Gary Gensler, the chairman of the Securities and Exchange Commission (or just “Gary,” as Mr. McKenzie fondly calls him; they’ve never met).

The crypto market seemed tailor-made for fraud, Mr. McKenzie said. He was convinced the skyrocketing valuations of popular coins were fueled by reckless speculation, rather than any practical application of the technology. “It doesn’t do what currencies do,” he said. “It’s not a reliable store of value, unit of account or medium of exchange.”

In August, Mr. McKenzie sent a Twitter DM to Jacob Silverman, a tech writer for The New Republic who had recently published an essay titled “Even Donald Trump Knows Bitcoin Is a Scam.” “I’d love to pick your brain,” the actor wrote. “Feel free to disregard this if it’s all too weird.”

Mr. Silverman, an “O.C.” viewer, was intrigued. He and Mr. McKenzie both live in Brooklyn, and they met for beer and burgers at Henry Public. Mr. McKenzie proposed a book project; Mr. Silverman agreed on the spot. “I started also to understand Ben’s sense of outrage at what he saw and everyday people potentially getting fleeced,” Mr. Silverman said. Abrams Press is planning to publish their book, “Easy Money,” in 2023.

Mr. McKenzie said his newfound passion has left friends “supportive but confused,” while his wife, the former “Gotham” star Morena Baccarin, is “just tired of me talking about it.” Mr. McKenzie has a bachelor’s degree in economics from the University of Virginia, and over the years he has occasionally chatted about the intersection of law and finance with his father, Pete Schenkkan, a regulatory lawyer in Austin. Still, Mr. Schenkkan said, he was “astonished” to learn of his son’s crypto fixation. “It was a leap sideways from the rest of his life.”

The project is also a deviation from how many celebrities have approached crypto. Matt Damon appeared in a now-infamous commercial for Crypto.com, a trading platform. Paris Hilton has been hawking NFTs. In an essay for Slate in October, Mr. Silverman and Mr. McKenzie wrote that celebrity endorsements are exposing ordinary consumers to scams such as “rug pulls,” in which an anonymous developer solicits funds from investors and then disappears with the money. “The Hollywoodization of crypto,” they wrote, “is a moral disaster.”

Mr. McKenzie has joined a growing group of skeptics and critics known as “no-coiners.” In February, he appeared on “Crypto Critics’ Corner,” a podcast hosted by Bennett Tomlin and Cas Piancey, who post two episodes a week about the risks of decentralized finance and other crypto ventures.

No-coiners are often the targets of online abuse, though the trolling can run both ways. “I’ve picked a lot of fights,” Mr. Tomlin said. “Often I was the one trying to initiate conflicts by trying to point out to people that ‘Before you said this, now you’re saying this.’”

The no-coiners have some of the same idiosyncratic obsessiveness as the crypto bros; like their antagonists, they gather on Discord and Twitter to exchange tips and memes, and they’re fluent in acronym-heavy jargon. Mr. McKenzie acknowledges that he is an unusual addition to their ranks, which consist largely of journalists, software engineers and academics. “I’m an actor,” he said. “I don’t know what I’m doing.”

Mr. McKenzie’s background also gives him some advantages. Many crypto bros try to silence skeptics with the same mic drop: “Have fun staying poor.” “They don’t use that line much with me,” Mr. McKenzie said. “You want to compare real-money bank accounts?”

But in the noisy world of crypto, TV fame doesn’t necessarily translate to influence. Before setting out for the mine, Mr. McKenzie led a panel at South by Southwest called “Trust Me I’m Famous.” The session took place in a large auditorium, with many rows of empty seats. A group of young fans cheered when Mr. McKenzie introduced himself as Ryan from “The O.C.,” then spent the rest of the event glued to their smartphones while he held forth on the dangers of unregulated securities trading. (He found his 6-year-old daughter, Frances, slumped in her seat at the end of the panel. “I know it was boring,” he told her. “Are you mad at me?”)

Nor did Mr. McKenzie’s celebrity open any doors at Whinstone, where he and Mr. Silverman were hoping to do some book research. When Mr. McKenzie pulled into the parking lot, a concerned-looking security guard asked him to identify himself. “I’m an actor,” Mr. McKenzie said. Had the guard seen “Gotham”? No. What about “The O.C.”? Also no. “Ask your daughter about ‘The O.C.,’” Mr. McKenzie replied with a grin. A second security guard said he had watched “The O.C.” but didn’t recognize Mr. McKenzie.

After a few more minutes of confusion (one of the guards kept referring to the mine’s celebrity visitor as “Bill McKlensley”), the security team sent Mr. McKenzie, Mr. Silverman and a cameraman who was documenting their trip to meet Chad Harris, a former Christmas tree salesman who now manages the Whinstone plant, which was acquired last year by the publicly traded Bitcoin mining company Riot Blockchain.

Blockchain. A blockchain is a database maintained communally and that reliably stores digital information. The original blockchain was the database on which all Bitcoin transactions were stored, but non-currency-based companies and governments are also trying to use blockchain technology to store their data.

Web3. The name “web3” is what some technologists call the idea of a new kind of internet service that is built using blockchain-based tokens, replacing centralized, corporate platforms with open protocols and decentralized, community-run networks.

DAOs. A decentralized autonomous organization, or DAO, is an organizational structure built with blockchain technology that is often described as a crypto co-op. DAOs form for a common purpose, like investing in start-ups, managing a stablecoin or buying NFTs.

Mr. Harris seemed as comfortable in front of the camera as the actor turned critic who’d showed up to spar with him; he said he’d given 1,000 tours of the facility. When photographers arrive at the mine, he said, “I know which way to turn my shoulder.”

Mr. Harris said he was confident he could go toe to toe with any skeptic; he bragged that he’d recently schooled some crypto haters from Vice News. “You can’t bash something if you don’t know all the facts,” he said. At one point, he boldly predicted that he could change Mr. McKenzie’s mind about crypto with a single sentence. He proceeded to speak for several minutes straight about the economic benefits of Bitcoin mining.

Mr. Harris led Mr. McKenzie and Mr. Silverman through a vast warehouse filled with hundreds of whirring machines. The cameraman captured footage of Mr. McKenzie in a hard hat, nodding sagely while Mr. Harris explained the intricacies of the liquid-immersion cooling system that keeps the mining machines from getting too hot. On “The O.C.,” Ryan is a well of repressed emotion, rarely betraying a hint of his thoughts. Mr. McKenzie, conversely, is a chatterbox: For two hours, he grilled Mr. Harris on the energy costs of crypto mining and the practical utility of Bitcoin as the camera rolled.

Mr. McKenzie and Mr. Silverman have floated the idea of adapting their still-unwritten book into some sort of Hollywood production. They’re modeling the project on “The Big Short,” Michael Lewis’s book about the savvy investors who predicted the 2008 housing market crash. The movie adaptation features Margot Robbie drinking champagne in a bathtub as she explains the subprime mortgage crisis.

“Jacob and me in thongs,” Mr. McKenzie said. “It would probably turn people away.” Mr. Silverman laughed. “I will go to the gym for one month,” he said.

If that doesn’t work out, there’s always TV. Mr. McKenzie said he pitched Josh Schwartz, the “O.C.” creator, on a reboot in which a cryptocurrency billionaire, maybe the son of Luke Ward, whose series arc traces an evolution from villain to beloved himbo, moves to Newport Beach and takes control of the local real estate market.

After the tour, Mr. Harris led Mr. McKenzie and Mr. Silverman to a building that the mining staff call “the White House” — the site of the mine’s executive office. Standing by the door, Mr. McKenzie pressed Mr. Harris on his cryptocurrency commitments. Wasn’t it just another form of gambling? A high-stakes poker game with no real societal value?

Mr. Harris shrugged. He said he was comfortable taking financial risks. “Think about it in parallel with your own life,” he said. Mr. McKenzie had taken a break from acting and put his reputation on the line to write a book arguing that the nation’s tech elites are promoting a glorified Ponzi scheme. “Life’s a gamble,” Mr. Harris said.

The plans for giant seaweed farms in European waters

10 finance firms effectively own half of all future carbon emissions