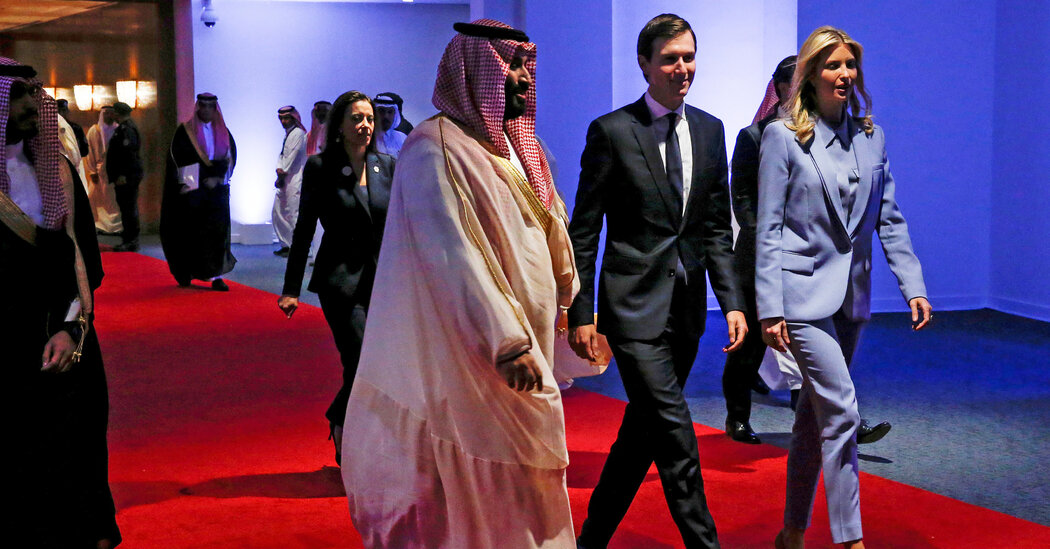 Six months after leaving the White House, Jared Kushner secured a $2 billion investment from a fund led by the Saudi crown prince, a close ally during the Trump administration, despite objections from the fund’s advisers about the merits of the deal.

Those objections included: “the inexperience of the Affinity Fund management”; the possibility that the kingdom would be responsible for “the bulk of the investment and risk”; due diligence on the fledgling firm’s operations that found them “unsatisfactory in all aspects”; a proposed asset management fee that “seems excessive”; and “public relations risks” from Mr. Kushner’s prior role as a senior adviser to his father-in-law, former President Donald J. Trump, according to minutes of the panel’s meeting last June 30.

But days later the full board of the $620 billion Public Investment Fund — led by Crown Prince Mohammed bin Salman, Saudi Arabia’s de facto ruler and a beneficiary of Mr. Kushner’s support when he worked as a White House adviser — overruled the panel.

Ethics experts say that such a deal creates the appearance of potential payback for Mr. Kushner’s actions in the White House — or of a bid for future favor if Mr. Trump seeks and wins another presidential term in 2024.

Mr. Kushner played a leading role inside the Trump administration defending Crown Prince Mohammed after U.S. intelligence agencies concluded that he had approved the 2018 killing and dismemberment of Jamal Khashoggi, a Saudi columnist for The Washington Post and resident of Virginia who had criticized the kingdom’s rulers.

The Saudi fund agreed to invest twice as much and on more generous terms with Mr. Kushner than it did at about the same time with former Treasury Secretary Steven Mnuchin — who was also starting a new fund — even though Mr. Mnuchin had a record as a successful investor before entering government, the documents show. The amount of the investment in his firm, Liberty Strategic Capital — $1 billion — has not been previously disclosed.

A spokesman for Mr. Kushner’s firm said of its relationship with the Saudi Public Investment Fund, “Affinity, like many other top investment firms, is proud to have PIF and other leading organizations that have careful screening criteria, as investors.”

A spokesman for the Saudi fund declined to comment on its investment process. If any additional discussions about the deal took place, they were not reflected in the documents and correspondence obtained by The New York Times.

The Times reported last fall that Mr. Kushner had been seeking a Saudi investment. Now, the internal fund records and correspondence obtained by The Times show the outcome, scale and timing of his firm’s deal as well as the debate it aroused. Those documents and other filings indicate that at this point Mr. Kushner’s venture depends primarily on the Saudi money.

Mr. Kushner planned to raise up to $7 billion in all, according to a document prepared last summer for the Saudi fund’s board. But so far he appears to have signed up few other major investors.

In its most recent public filings with the Securities and Exchange Commission, dated March 31, Mr. Kushner’s firm reported that its main fund had $2.5 billion under management, almost entirely from investors based overseas. Most of that appears to be the $2 billion from Saudi Arabia.

The Saudi documents obtained by The Times say that in return for its investment, the Saudi fund would receive a stake of at least 28 percent in Mr. Kushner’s main investment vehicle.

No law or rules constrain the investment activities of former administration officials after leaving the White House; many from both parties have profited from connections and experiences gained in government.

But Robert Weissman, president of the nonprofit group Public Citizen, called Mr. Kushner’s relationship with the Saudis “extremely troubling,” arguing that his stance toward the kingdom’s leadership as a senior adviser “makes the business partnership appear even more to be both a reward to, and an investment in, Kushner.”

Saudi officials say that the kingdom’s Public Investment Fund, which also holds stakes in the ride-sharing company Uber and the Newcastle United Football Club in Britain, operates autonomously, with an elaborate governance structure that includes the investment panel. But Prince Mohammed took control of the fund when he rose to power in 2015 and he is its paramount decision maker.

Mr. Kushner, whose fund has not publicly disclosed a theme or focus, has little experience or track record in private equity. Before working in the White House, he ran his family’s commercial real estate empire, sometimes with disappointing results. His best-known deal was the $1.8 billion purchase of the office tower at 666 Fifth Avenue in Manhattan, in 2007; the building’s mortgage became a crippling liability when the recession hit the next year.

Diplomats, investors and ethics experts noted during the Trump administration that his anticipated return to the family business injected a potential conflict of interest into Mr. Kushner’s relationship with Prince Mohammed and other oil-wealthy Arab royals. Many are major long-term investors in American real estate, and the Kushner family had courted them before.

While advising Mr. Trump, Mr. Kushner developed a friendship and informal alliance with the Saudi crown prince. Prince Mohammed signaled that he favored closer relations between Israel and the Arab monarchs of the Persian Gulf, which was also one of Mr. Kushner’s priorities while in the Trump administration. He helped negotiate a series of agreements, called the Abraham Accords, opening diplomatic relations between Israel and other Arab monarchies. After leaving government, he set up a nonprofit to promote economic and other ties between the countries.

In Washington, Mr. Kushner had also helped broker $110 billion in weapons sales to Saudi Arabia over 10 years. He helped protect those and other weapons deals from congressional outrage over the murder of Mr. Khashoggi and the humanitarian catastrophe created by the Saudi-led military intervention in Yemen.

The debate within the Saudi fund over investing with Mr. Kushner was a stark contrast to the easy approval of the proposal by Mr. Mnuchin, a former Goldman Sachs partner who invested in numerous Hollywood films, including “The Lego Movie,” and helped resurrect a failing California bank before entering government.

Mr. Mnuchin’s fund is focused on cybersecurity, financial technology and entertainment — all sectors that fit Saudi priorities, according to an executive summary prepared by the fund’s staff. The summary noted that Mr. Mnuchin’s work at the Treasury gave him “significant access toward understanding the future of the U.S. financial system,” and the firm’s founders had “deep experience at some of the highest levels of the U.S. regulatory system” overseeing and monitoring its industries.

As Treasury secretary, Mr. Mnuchin had also chaired a committee responsible for vetting certain merger deals with foreign companies; the summary said he had “shaped” the new fund to accommodate investment from foreign governments like the kingdom.

In its most recent filing, dated March 31, Mr. Mnuchin’s firm reported raising $2.7 billion from a total of 33 investors. Most of the money came from abroad, and the Saudi documents say that other Persian Gulf states also invested.

A spokesman for Liberty Strategic Capital said the firm “has a diverse investor base including U.S. insurance companies, family offices, sovereign wealth funds, and other institutional investors.”

Both Mr. Kushner’s and Mr. Mnuchin’s funds treated the Saudi fund as a “cornerstone” investor, the Public Investment Fund documents say, offering the Saudis a discount on the standard 2 percent asset management fee for private equity firms as well as a cut of the firm’s 20 percent share of any fund profits, known as carried interest.

But the Saudis agreed to pay Mr. Mnuchin’s firm only a 1 percent asset management fee, compared to 1.25 percent for Mr. Kushner’s, the documents indicate. On a $2 billion investment, that would pay his firm $25 million a year, not including a share of any profits earned by the Affinity fund.

Both firms agreed to open regional offices in Riyadh, which the Saudi government says it will soon require of any international company doing business with the kingdom.

The five-member board investment committee evaluating Mr. Kushner’s proposal referred to it with the code name Project Astro. The panel was led by Yasir al-Rumayyan, a Harvard Business School graduate who is also chairman of Saudi Aramco, the state-owned oil giant. The panel also included Andrew Liveris, the Australian-born former chief executive of the Dow Chemical Company, and Ayman al-Sayari, the vice chairman of the Saudi Central Bank.

A panel member identified in the minutes as Dr. al-Mojel — possibly Ibrahim al-Mojel, the chairman of the Saudi Industrial Development Fund, who holds a Ph.D. from Stanford — asked before the June 30, 2021, meeting about the justification for investing in Mr. Kushner’s fund. “Why is the strategic benefit worth the risk?” he asked, according to printed responses.

The responses, apparently prepared by staff of the Saudi fund, argued that the promised Riyadh office of Mr. Kushner’s firm, Affinity, would help the Saudis “capitalize on the capabilities of Affinity’s founders’ deep understanding of different government policies and geopolitical systems.”

The explanation for the absence of any American institutional investors in Mr. Kushner’s fund was that he “would like to avoid media attention,” the written responses said. “Accordingly, Affinity has approached international investors on a very discreet basis.”

Mr. Kushner’s lack of private equity experience and the “unsatisfactory” results of due diligence reviews conducted on behalf of the Saudi fund “are valid and important concerns,” the responses acknowledged, but they attributed the findings to the fact that he was still setting up the infrastructure for his company.

What’s more, the responses added, the Saudi fund had “partially mitigated these risks”: The Saudis had stipulated that Mr. Kushner’s firm could draw down only $500 million of the $2 billion commitment before “having a qualified investment team in place, on-boarding core operational professionals and constructing the investment committee.”

(Late last year, Mr. Kushner hired two experienced private equity investors, Bret Pearlman and Asad Naqvi; the recent securities filing states that Affinity Partners now has a staff of 20, about half of whom are investment professionals.)

Even after reading the responses, Mr. Liveris, the former Dow Chemical chief executive, and Mr. al-Sayari, of the Saudi Central bank, added their own doubts along with Dr. al-Mojel’s. Mr. al-Rumayyan, the panel chairman and top executive of the Saudi fund, appeared to concur, according to the minutes. The panel members did not respond to requests for comment or could not be reached.

The minutes record that all four panel members attending the meeting “stated that they are not in favor of Project Astro.” The panel’s rules require the votes of a majority of those present to pass a resolution, the minutes note. Mr. al-Rumayyan, in this case, suggested raising the panel’s “views and decision” to the fund’s board, led by the crown prince.

But within days, the board had passed a resolution approving the deal, documents show.

In a letter dated last July 5, fund staff explained to a board member who had questioned the size of the investment why it could not be cut back.

“This investment aims to form a strategic relationship with the Affinity Partners Fund and its founder, Jared Kushner,” the letter said. A reduction of the size of its $2 billion stake “may negatively or fundamentally affect the framework of the agreed strategic and commercial relationship.”