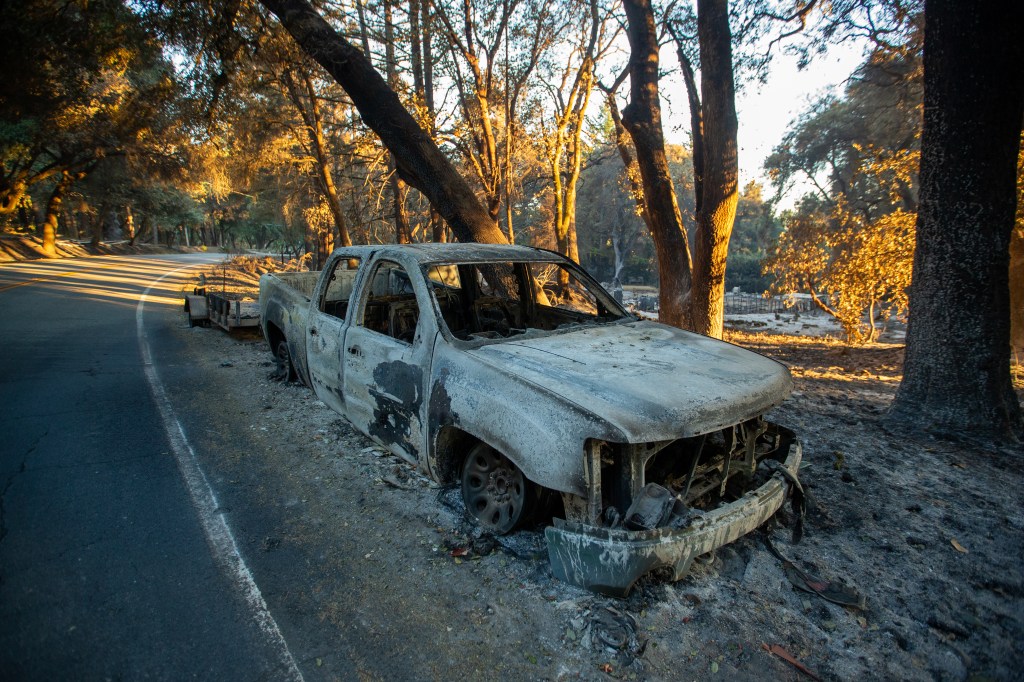 Firefighters increased containment on at least two of the major complex fires ravaging the Bay Area, as officials work to continue lifting evacuation warnings and allowing residents back into their homes in Felton and Davenport.

The LNU Complex Fire in the North Bay — now the third-largest and 10th most destructive fire in recorded California history — grew by 980 acres to 373,324. Containment increased to 41 percent. On Friday, fire officials lifted evacuation warnings in parts of Sonoma, Solano and Napa counties, with repopulations expected to continue today “as areas are determined safe for return,” Cal Fire wrote in an incident report.

Damage inspection teams are in the area, where already 1,080 structures have been destroyed and 272 damaged. The fire has already resulted in three deaths in Napa County and two deaths in Solano County.

The CZU Complex Fire in the Santa Cruz Mountains grew to 84,338 acres and containment increased to 33 percent. Fire officials said they had had a good day on the lines and hoped to make more progress before increased temperatures and a shift in the wind is expected on Wednesday and Thursday.

Firefighters have been challenged by the rough terrain in the mountains, and as repopulation continues crews have had to clear out fire-weakened trees, downed power lines and burned-out stumps. The fire has destroyed 1,094 structures including 720 single-family homes in Santa Cruz County, and 20 in San Mateo County. More than 9,000 structures remain threatened.

The fire has resulted in one civilian death, and more than 40,000 people have been evacuated. One person remains missing, but he was reported missing before the fires began.

Crews have been expanding containment lines, including some near Davenport, as well as near Bonny Doon. Ben Lomond and Boulder Creek, once under heavy threat from the encroaching wildfire. On Saturday afternoon, officials lifted an evacuation order for parts of the town of Felton.

“That area is looking fantastic as far as, we’re getting a line put in, it’s getting improved constantly,” Cal Fire Chief Mark Brunton said eary in the day. “If you haven’t been in there — steep terrain, a lot of heavy fuels, a lot of duff.”

Crews are mopping up parts of the fire and are working to reopen Highway 1, officials said in a Saturday morning briefing. They’re also hoping to allow more residents to return home. The California Highway Patrol announced Saturday morning the reopening of roads in Zayante, Lompico and Bear Creek Road east of Amber Ridge Loop as part of the repopulation process.

“We’re getting there. We’re one step at a time,” Brunton said.

The SCU Complex Fire in part of Santa Clara County and beyond remained at 374,471 acres, making it the second-largest wildfire in California’s recorded history after the 459,123-acre Mendocino Complex Fire of 2018. The fire is 40 percent contained and has destroyed 53 structures, 20 of which are considered minor structures.

Firefighters are starting and continuing controlled fire plans along the south and northwestern edges of the fire zone, which will allow them to contain the park before it’s able to spread further into Henry W. Coe State Park in the south and into other protected areas to the west. Crews have already burned 5 miles of fire lines, Cal Fire Chief Scott Corn said in a video about the operations. The controlled burns create a buffer zone by burning fuel ahead of the advancing wildfire.

The controlled burn operations have been aided by the weather and flame retardant dropped by firefighting aircraft. Corn expects the operations to “have great success” and last between 48 and 72 hours. At an afternoon media briefing, Cal Fire officials said the operations had been going well and were allowing firefighters to battle the wildfire in more favorable terrain. But, they reiterated, the massive fire remained a threat.

“We’re still at the edge of our comfort zone,” Santa Clara Unit Chief Jake Hess said. “Part of that is due to the complexity the size and the scope of this incident and the resource that we have.”

On Saturday afternoon, evacuation warnings were lifted for parts of Santa Clara County east of Gilroy, as well as for portions of Alameda and San Joaquin counties. Officials directed evacuees to the returning home checklist at ReadyForWildfire.com, which includes guidance on checking homes for gas leaks, disposing of tainted food and avoiding tap water.

Lower temperatures and a marine layer were forecast for Saturday, but as early as Sunday the weather will change. Drier, hotter conditions are forecast through the week, reaching the high 80s and 90s in parts of the North Bay.

An eastern Pacific ridge will build into the region from tomorrow through next week and bring a warming/drying trend and suppression of the marine layer . pic.twitter.com/cNRq7VyQO8