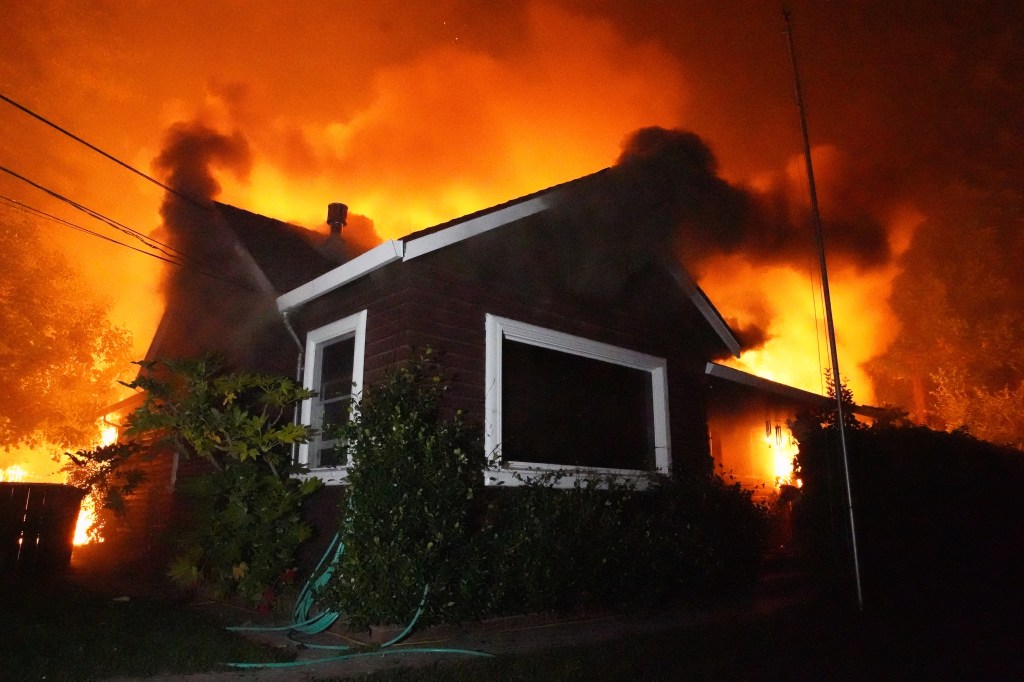 Hundreds of thousands of acres scorched. Tens of thousands forced to flee. Hundreds of structures left in ashes. And on Thursday, the first casualties of the lightning-sparked wildfires ripping through the Bay Area.

The three fire complexes around the region have combined to burn nearly 500,000 acres and were still hardly contained as the sun began to illuminate hazy skies Friday morning. On Thursday night, fire crews announced the first three civilian casualties discovered in the rubble left in Napa County and a fourth in Solano County; a PG&E worker in Solano County and a helicopter pilot near Fresno have also died fighting the infernos.

The fires were sparked by some 11,000 lightning strikes around the state since Sunday, which ignited at least 360 blazes statewide, squeezing firefighting resources. Those had grown into 23 separate fire complexes, the largest of which being the LNU, SCU and CZU fires in the Bay Area.

Follow below for the latest updates, and explore the map to see where fires are burning.

Residents in Pocket Canyon and anywhere else between the Russian River and Highway 116, as far east as Martinelli Road, were ordered to evacuate Friday morning. Officials also issued new evacuation warnings, where residents should be ready to flee in a moment’s notice.

The flames expanded their territory overnight by more than 70,000 acres, leaving five buildings scorched in their wake and growing to 229,968 acres in total size. Most of the flames were burning in rural San Joaquin and Stanislaus counties, but the Calaveras Zone fires, just over the hillside from San Jose, forced evacuations Thursday night on the eastern edges of the city limits.

The Reservoir Fire in the Calaveras Zone had grown to 51,619 acres and was 10% contained, while the more remote Canyon Zone fires had burned 174,866 acres with 0% containment. The Deer Zone fires, near Brentwood, hadn’t grown in 24 hours and were 99% contained Friday morning.

Fire crews anticipated northwest winds to impact the flames in the Calaveras Zone and the Deer Zone. When “fuels, winds and topography are in alignment,” fire officials wrote in an update Friday morning, “expect critical rates of spread … and an increase in fire activity.”

Firefighters increased their containment of the LNU Complex fires to 7%, while the flames grew by about 4,000 acres overnight to a total of 219,067 between Napa, Sonoma, Solano, Lake and Yolo counties.

The “extreme behavior” of the fire had flames moving in all directions and threatening multiple communities. CalFire officials said they expected “significant fire growth.”

The Walbridge Fire was among fire crews’ highest priorities. It had already consumed 21,125 acres and was heading toward Healdsburg with 0% containment Friday morning.

North of Lake Berryessa, seven smaller blazes had merged to form the Hennessey Fire, which had consumed the majority of land burned in the LNU Complex at about 194,942 acres.

Despite a warning Thursday evening that the CZU Complex could begin to burn between 700 and 1,000 acres every hour, it grew by just 2,000 acres by Friday morning, thanks to a marine layer overnight, according to CalFire officials.

But once it dissipated, the fire was raging as ferociously as ever before, reaching 50,000 acres in size by 6 a.m. Friday still with zero containment. It was burning most intensely on the eastern edge of the flames, near Boulder Creek, Ben Lomond and further south, fire officials said.

At least 50 structures had been confirmed to have been destroyed, but CalFire deputy chief Jonathan Cox said crews “anticipate that will go into the triple digits” once they are able to get a complete picture of the destruction.

Already shortstaffed, fire crews had to dedicate personnel to make three rescues of people who didn’t heed mandatory evacuation orders, which had expanded to include more than 60,000 residents in San Mateo and Santa Cruz counties.

“I know they’re trying to do the right thing for their property and their neighbors, but in the long run it’s created a bigger problem for the first responders,” Chief Mark Brunton said. “Because of that, it took our firefighters away from the firefight to rescue them and put first responders and firefighters or law enforcement brothers and sisters into danger to rescue them out of that situation.”

About 70 firefighters were going door-to-door in Scotts Valley overnight to finish evacuating the 12,000 some residents on the southern edge of the blaze. That evening, officials expanded mandatory evacuation orders to include the wooded campus of UC Santa Cruz.

Officials warned residents it could be “weeks” before they are able to return to their homes.

Santa Cruz County on Thursday asked all overnight visitors to abandon their hotel rooms in order to free up space for new evacuees and for all potential tourists to avoid the area.

Catch up on all the updates from Thursday here.