Barrett refused to divulge her legal views on health care and abortion rights on a call, Coons says. 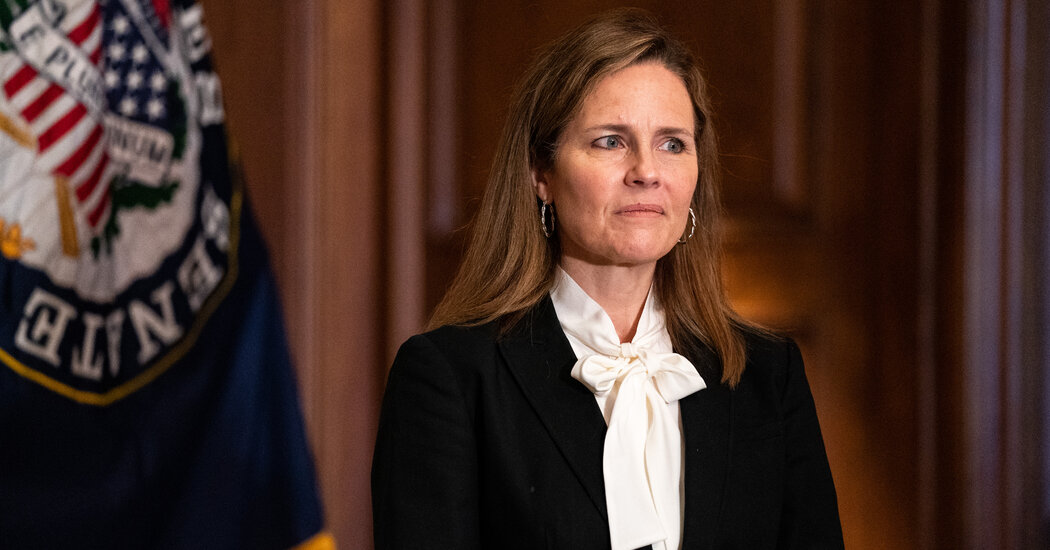 Senator Chris Coons, Democrat of Delaware, said that Judge Amy Coney Barrett, President Trump’s nominee for the Supreme Court, repeatedly declined during a phone call on Wednesday to share her views of legal issues around abortion rights or the Affordable Care Act, citing the need to maintain impartiality on the bench.

The conversation described by Mr. Coons, one of at least eight Democrats who have met with or spoken to Judge Barrett since her nomination, likely offers a preview of how she will approach multiple days of public confirmation hearings before the Senate Judiciary Committee next week. Like other court nominees, she plans to refrain from any testimony that could tip her hand one way or another on hotly contested issues.

Mr. Coons told reporters that he had repeatedly pressed Judge Barrett on her legal commentary questioning Supreme Court precedent around the health care law and on statements about her judicial philosophy that could have bearing on the future of Roe v. Wade and other abortion rights cases. But each line of questioning ended in the same place.

“She demurred — she just essentially said I am not going to answer questions that may speak to cases that may come before me,” he said.

Democrats believe Judge Barrett, a Notre Dame law professor and appeals court judge in Chicago, has left a clear record in her legal writings and public statements indicating she would be hostile to abortion rights and the Affordable Care Act. Judge Barrett signed an anti-abortion newspaper advertisement in 2006, when she was a law professor at Notre Dame.

“We, the following citizens of Michiana, oppose abortion on demand and defend the right to life from fertilization to natural death,” said the statement, published in an advertisement in the South Bend Tribune by St. Joseph County Right to Life, which is now known as Right to Life Michiana and says it is “one of the oldest continuously active pro-life organizations in the nation.”

Mr. Coons said he had also asked the nominee whether she would recuse herself from any cases resulting from November’s presidential election, in light of Mr. Trump’s stated goal of having her confirmed to the bench in time to rule in his favor.

“She made no commitment to recusal,” he said, adding that she instead gave generic information about what would guide such decisions.

Most Democrats are boycotting the usual “courtesy calls” in protest of Republicans rushing through a Supreme Court nominee so close to the election, after refusing to do so four years ago when a Democrat was in the White House. Along with Mr. Coons, Senators Sheldon Whitehouse of Rhode Island, Cory Booker of New Jersey, Amy Klobuchar of Minnesota, Dianne Feinstein of California, Richard J. Durbin of Illinois, Patrick J. Leahy of Vermont and Joe Manchin III of West Virginia have also spoken with her. All but Mr. Manchin are members of the Judiciary Committee.

Judd Deere, a White House spokesman, said after the calls with Mr. Coons and other Democrats that Judge Barrett had “emphasized the importance of judicial independence and spoke about her judicial philosophy and family.”

The meetings took place by phone rather than in person after lawmakers abandoned Capitol Hill this week amid a coronavirus outbreak that appears to trace directly to a large White House ceremony Mr. Trump held more than a week ago to announce Judge Barrett’s nomination.

Despite Democratic pleas to delay the confirmation hearings in light of the health risks, Republicans insist they will move ahead as planned.