Barr says it’s normal for the Justice Dept. to defend the president in a defamation suit. 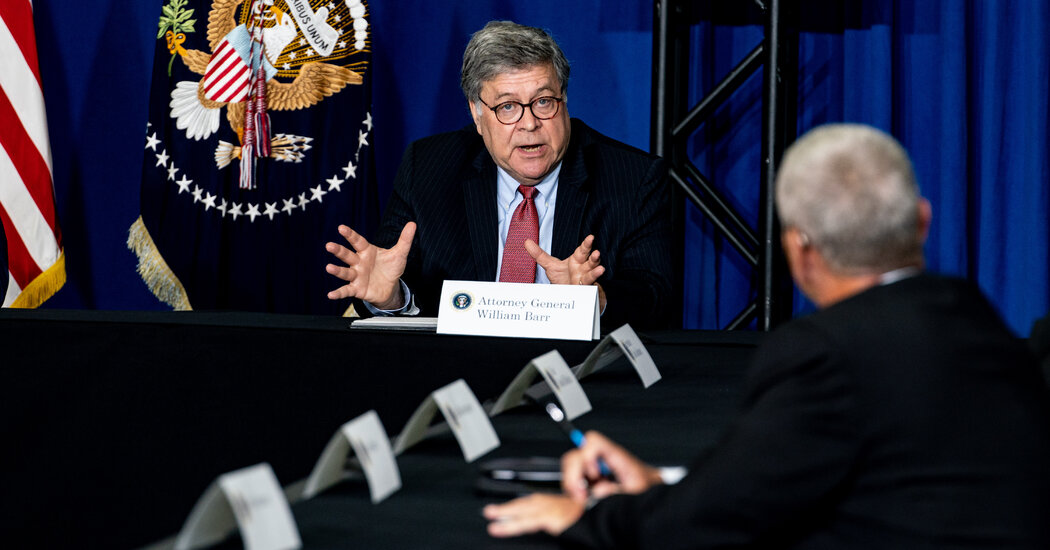 Attorney General William P. Barr said on Wednesday that the White House had asked the Justice Department to intervene in defending the president against a woman’s accusations that he defamed her.

“This was a normal application of the law,” Mr. Barr said Wednesday at a news conference in Chicago, making his first comment on the proposed intervention. “The law is clear. It is done frequently. And the little tempest that is going on is largely because of the bizarre political environment in which we live.”

The Justice Department would use taxpayers’ money for Mr. Trump’s representation in the case, replacing his personal lawyers. The move also could lead to the suit’s dismissal, under a law called the Westfall Act.

The plaintiff, the author E. Jean Carroll, accused Mr. Trump of having raped her in a department store dressing room in the 1990s. He said she was a liar and that he did not know her, although the two appeared in a photograph of a 1987 party along with her ex-husband. He also said she was “not my type.” Ms. Carroll sued him in November 2019 for making defamatory statements about her.

The White House memorandum, arguing that Mr. Trump had acted in his official capacity as president when he denied Ms. Carroll’s accusation, cited the Westfall Act, which would remove Mr. Trump as the defendant and substitute the government. Since the government has sovereign immunity and cannot be sued for defamation, the case could be dismissed.

The Justice Department maintains that the complaint meets the necessary standards to substitute the government. If Lewis A. Kaplan, the U.S. District Court judge in New York assigned to the case, agrees, he could dismiss the case, which was transferred from a New York State Court.

The department’s motion to take control of the defense came as Mr. Trump’s private lawyers were facing a deadline to appeal an order compelling a deposition and a DNA sample to determine whether his genetic material is on a dress Ms. Carroll was wearing at the time.

In portraying the Justice Department’s intervention as unremarkable, Mr. Barr did not say why it took more than 10 months to step in. Mr. Trump’s personal lawyers had tried to put the lawsuit on hold, but a judge ruled last month that it could proceed.