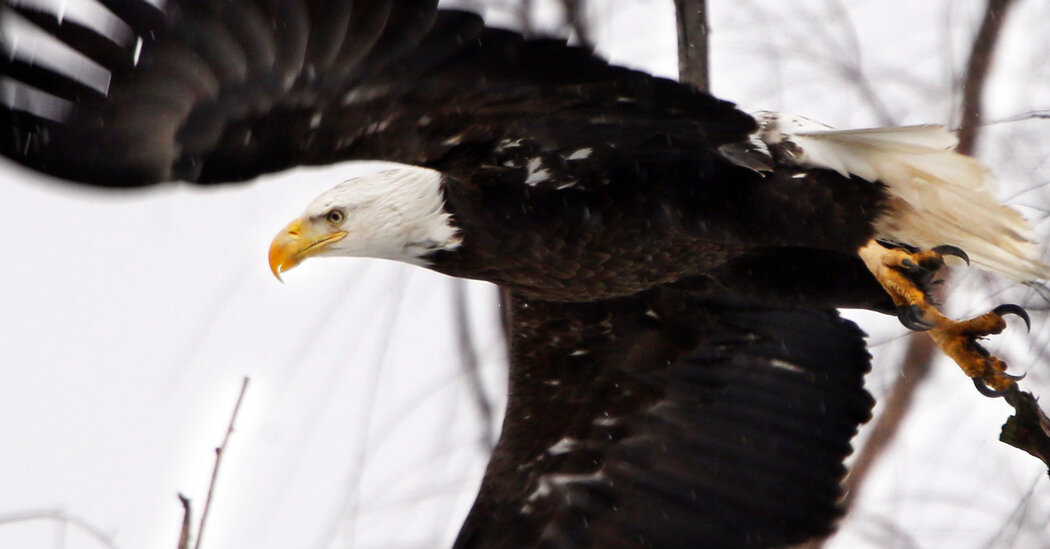 A squabble in the sky over Lake Michigan left one bald eagle victorious and one government drone mangled and sunken.

Hunter King, a drone pilot at the Michigan Department of Environment, Great Lakes, and Energy, was surveying an area of the lake near the state’s Upper Peninsula last month when the drone started “twirling furiously” after it indicated that a propeller had been torn off.

“When he looked up, the drone was gone, and an eagle was flying away,” said the department, whose name is abbreviated E.G.L.E.

A couple who regularly spends time watching eagles go after sea gulls in the area witnessed the battle but were surprised when they learned that it was a drone that had been downed in the fight, the department said.

Mr. King and the couple searched for hours for the $950 drone, the department said, and a second operator from the department, Arthur Ostaszewski, later brought a kayak and snorkeling gear to search for the aircraft, which measured a little more than one foot across.

Struggling to find the drone in the murky water, Mr. Ostaszewski ditched the snorkel and shuffled around in the muck for two hours in a grid-like pattern “like I was playing Battleship and wanted to cover the entire board,” the department said.

The battle happened 162 feet above the water and the drone fell at a speed of 20.4 miles per hour, according to flight records sent from the drone in its final moments.

The department speculated that the eagle could have attacked because of a territorial dispute, because it was hungry “or maybe it did not like its name being misspelled.”

Julia Ponder, executive director of the Raptor Center at the University of Minnesota, said on Saturday that it was likely because the drone had encroached on the eagle’s territory.

“They’re the king of the skies,” she said.

In 2016, a Dutch police force employed sea eagles to take down illegal drones that could fly over public events or endanger visiting dignitaries. The eagles were trained to view drones as prey — rewarded with a piece of meat after successful captures — and were sheathed with claw protectors for battles with larger drones.

Ms. Ponder said that in most altercations, eagles pose more of a risk to drones than the other way around, though curious pilots flying the aircraft over eagles’ nests could cause harmful disturbances.

Generally, eagles do not attack in the air, Ms. Ponder said: They scavenge for food or catch fish from the water.

Bald eagle populations have recovered in recent decades. Since falling to a low of around 400 nesting pairs in the continental United States in 1963, the population is now estimated to be in the tens of thousands, according to the U.S. Fish and Wildlife Service. They were removed from the federal endangered species list in 2007.