Attacking Biden, the president turned the White House into a partisan prop. 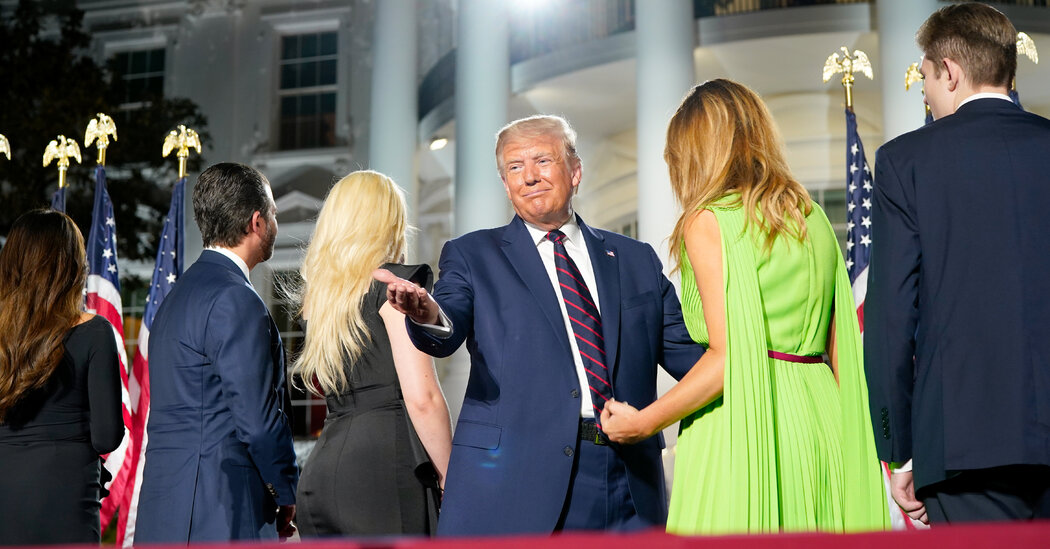 He called it “the People’s House.”

But on Thursday night, as President Trump accepted his party’s renomination in an overtly political event staged on the South Lawn of the White House, he turned the majestic building into a partisan prop like no politician has ever done before.

Capping a week in which Mr. Trump and his allies repeatedly ignored rules meant to enforce the line between politics and policy, the president stood grandly in front of the country’s most important landmark to denounce his rival

before an audience of more than 1,500, as American flags waved behind him.

Previous presidents have sought to carefully navigate the propriety of mixing campaigning with governing, even though the laws that attempt to minimize their collision do not apply to the occupant of the Oval Office.

Jimmy Carter announced his re-election bid in the East Room and Ronald Reagan did so from the Oval Office. But neither had live crowds flanked by giant Jumbotrons on either side of the White House, serving as immense campaign billboards.

At the beginning of his speech, Mr. Trump noted that the White House “has been the home of larger-than-life figures like Teddy Roosevelt and Andrew Jackson, who rallied Americans to bold visions of a bigger and brighter future.”

Mr. Trump’s campaign spared no expense in creating that backdrop — building an extensive red-white-and-blue stage where Marine One usually takes off as well as installing 1,500 folding chairs and a lectern with the seal of the president of the United States.

In his speech, as he called for evicting the “failed political class” from Washington, Mr. Trump turned back toward the White House.

“The fact is, I’m here,” he said, a broad smile across his face. “What’s the name of that building?” he asked as the crowd cheered. Turning back to the crowd, he was even more blunt: “But I’ll say it differently. The fact is we’re here, and they’re not.”

And at the end of his speech, he punctuated his use of the public spaces in Washington with a thunderous fireworks display over the Washington Monument and the Lincoln Memorial — all in service of his campaign.