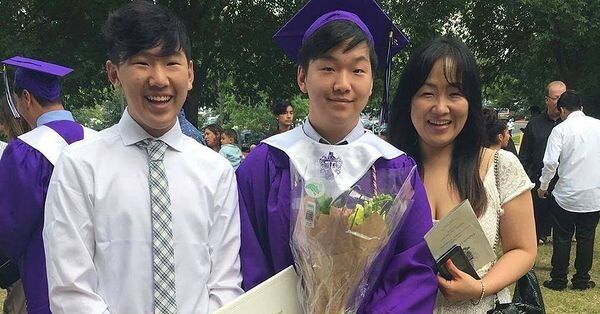 DULUTH, Ga. — It was already 1 p.m. when Randy Park tumbled out of bed one miserable March day. It had been another long night of TV and video games to distract himself from the emptiness swirling through the townhouse where his mother had once cooked meals between her shifts at a spa. He padded down the hallway, past her vacant bedroom, and nudged his younger brother, Eric, awake.

It was past time to face another day on their own.

In the immediate aftermath of the deadly shootings in the Atlanta area, the faces of Randy and Eric Park, now 22 and 21, seemed to be everywhere, their winsome images linked to a GoFundMe page established after their mother, Hyun Jung Grant, was killed. They were overwhelmed by financial donations, care packages, reporters at their door, and so many calls that Eric’s cellphone froze.

But in the months since, on the cusp of adulthood, the Park brothers have been largely left to navigate the world by themselves.

Sorrow takes many shapes after a mass shooting. Those left behind in the Atlanta area include Mario Gonzalez, whose new wife, Delaina Ashley Yaun, was a customer at Young’s Asian Massage. They include the grandchildren of Suncha Kim, who immigrated from South Korea in 1980. And they include Randy and Eric Park, whose anguish is compounded by the knowledge that their single mother was killed doing a job she disliked, part of her life that they knew little about and that kept her away from home for many hours.

“She died working for us,” Randy said. “It’s just unfair. She already didn’t have much of a life to begin with.”

The path forward for Ms. Grant’s sons is now murky, the questions before them both mundane and profound. Will they return to college or to work? What will they do with the money — nearly $3 million in all — that poured in to support them? What will they make of the rest of their lives?

The Park brothers live in a Korean enclave in suburban Atlanta. Until recently, Randy worked full-time at a nearby bakery and cafe. Eric was struggling in remote courses at Georgia Gwinnett College. The pandemic and their mother’s death put an end, at least temporarily, to those pursuits.

Growing up, the brothers believed they knew how to get by on their own because their mother was often at work. But the past few weeks have revealed all the ways in which Ms. Grant parented from afar: cleaning the house between shifts, cooking large meals that could last for days and calling every night from work to check in.

A torrent of hate and violence against people of Asian descent around the United States began last spring, in the early days of the coronavirus pandemic.

And without the guidance of their mother, who immigrated to the United States before her sons were born, their neighborhood can feel foreign. She was their connection not only to the community but also to their Korean heritage.

Without her, even the most basic tasks can become baffling ordeals.

On a recent evening Randy researched a recipe for the sort of kimchi stir fry his mother once made for them and set out for supplies: green onion and seaweed, red pepper powder and a tin of sesame oil. Shopping at the Korean grocery store H Mart evoked fond memories. As a young boy, he would hover over the live crabs, poking at them with tongs until his mother stopped him. They picked produce together, chatting about his love interests and future plans.

But the store where he had frequently accompanied her now felt like an unsolvable maze. Which aisles? Which brands? He tried to avoid eye contact with other shoppers who recognized him from the news.

Back home, he and Eric puzzled over the recipe.

“Do we have a skillet?” Randy asked.

“Well, a skillet is basically a pan,” Eric replied.

Randy looked inside a cabinet and pulled out a large pan: “Is this a skillet?”

Was a teaspoon the same as a tablespoon? Why had all the onions rotted?

Randy mixed the red pepper paste with sugar and, realizing he had miscalculated, sighed deeply. “I should’ve thought this through.”

They ate beside each other at the dinner table, staring at the third chair where their mother once sat.

Truth be told, there was a lot about Hyun Jung Grant that her sons did not know.

She had told them she was a teacher in South Korea and briefly lived in the city of Busan before moving to Washington State, where she found work as a waitress. She married and divorced, but the Park brothers never had a relationship with their father. Ms. Grant and the boys moved to Atlanta more than a decade ago to live among more Korean families, first in an apartment and more recently in a rented townhouse.

Along with other Korean immigrants, she worked at Gold Spa in a stretch of strip malls in northeastern Atlanta. Giving massages was an exhausting job that required long hours. Sometimes she stayed overnight for days at a time. She aspired to something more — a better job, a home that she owned — and did not talk much about her work, preferring to tell some people she worked at a makeup counter. But she had bills to pay and was determined to put her boys through college.

Many nights Randy and Eric had found themselves home without her, awaiting her check-in call.

How was your day? Have you eaten? Is your younger brother home?

Gold Spa, where Ms. Grant worked, was one of three businesses where workers and customers found themselves in the line of fire on March 16; she was among eight people killed. The suspect, Robert Aaron Long, told the authorities he had targeted the businesses because he wanted to remove sexual “temptation.” A prosecutor in Atlanta has said that Mr. Long targeted some of the victims because they were of Asian descent, and said she planned to seek the death penalty against him.

When Randy was young, a babysitter told him to consider himself Eric’s second “umma,” his substitute mother. Now, it is a role he fills in earnest.

After the shooting, he instinctively shielded his younger brother from the burden of decision-making. On his own, he shuffled from meeting to meeting, preparing his mother’s burial arrangements with the funeral home, sorting through finances with a newly hired financial adviser. He eventually forced himself to get his days going early, filling his mornings with the errands required of the head of the household.

Even now, he takes charge of meals and laundry, and the lingering logistics connected to their mother’s death. “I can’t just drop everything,” Randy said. “I have a responsibility.”

Eric often stays in his room, drifting in and out of sleep. Recently, he signed up for weekly driving lessons, but often he binge-watches shows like “Crash Landing on You,” a popular South Korean drama, waiting for his friends to finish class so they can play League of Legends in the evening. His room is littered with empty Starbucks to-go bags and smoothie cups.

The brothers were not close growing up, but their grief has drawn them to each other. Together, they saw their mother’s face for the final time at the funeral home. Together, they flipped through her photo albums in preparation for her memorial. They have discovered family pictures that their mother took and saved on her phone. They seek each other out when they are feeling lonely.

One April evening, Randy invited Eric to join him and some friends at Assa Tech Karaoke in Duluth, a rare night out for singing and conversation. It was Eric’s first attempt at karaoke, an activity he had hoped to enjoy with his mother.

Randy and his friends belted out a decent rendition of “Location,” by Khalid. And then, at Eric’s behest, the brothers tried one of the few songs they knew in their mother’s language. On opposite sides of the room, they kept their eyes glued to the lyrics on the screen, avoiding eye contact. Eric stumbled on some words, Randy held a few notes too long, but by the chorus, they got the hang of it.

They sang in sync in Korean until the very end. “Bogoshipda” — “I miss you.”

Slowly, the brothers are contemplating a future for themselves. Eric plans to return to college sometime next school year. Randy is considering finishing his last few semesters at Georgia State University or perhaps enrolling in a boot camp for computer science. They imagine a trip to South Korea to meet their mother’s family.

Among the most difficult parts of Hyun Jung Grant’s absence for the Park brothers is the long list of future trips and milestones they had hoped to spend together.

That reality sunk in on Eric’s 21st birthday, which would have also been his mother’s 52nd. For years, they had planned to share a drink when Eric was of age.

And so, on the morning of May 4, Randy and Eric tried their best to recreate the celebration their mother had in store. They purchased fruit cake from a nearby Korean bakery and searched the city for a bottle of Chamisul soju, a Korean distilled spirit, before driving to her grave.

It had been storming for days, but as the brothers walked across the field, the rain scattered and only clouds remained.

Randy led the way, having visited several times for burial arrangements. They spilled the liquor around their mother’s grave as an offering and ate their cake from paper plates.

They stayed, in silence, for half an hour, unsure what to say to each other. “Are you hungry?” Randy asked. Eric nodded yes, and they left.