At the Polish Border, Tens of Thousands of Ukrainian Refugees – The New York Times 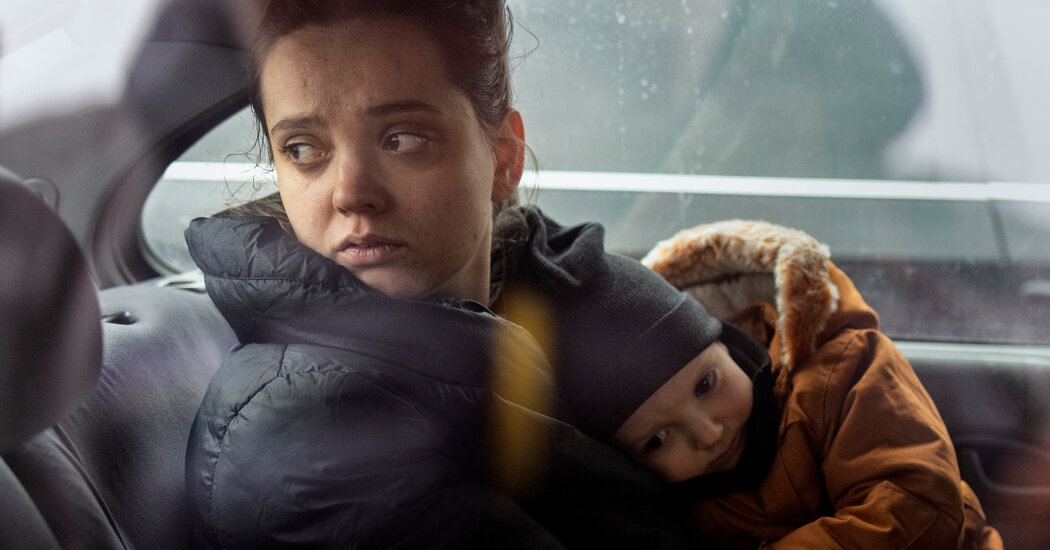 MEDYKA, Poland — Cradling her 3-year-old son, who was gravely ill with cancer, the 25-year-old Ukrainian mother staggered into Poland on Friday.

She was now safe from the bombs and rockets unleashed by President Vladimir V. Putin but despondent at being separated from her husband by a Ukrainian order that all able-bodied men stay behind to resist the Russians.

“He is not just my husband but my life and my support,” said Olha Zapotochna, one of the tens of thousands of Ukrainians, nearly all women and children, who have poured into Poland, Hungary and other neighboring countries since Monday. “I understand that our country needs men to fight, but I need him more,” she added, patting the head of her moaning sick child, Arthur.

The exodus from Ukraine gathered pace on Friday as fear spread that the Kremlin intends to impose its will far beyond just the east of the country, the scene of what Mr. Putin claims, with no evidence, is a “genocide” of ethnic Russians.

More than 50,000 Ukrainians have fled the country so far, the United Nations High Commissioner for Refugees, Filippo Grandi, said on Friday, and the agency believes as many as 100,000 have been displaced.

Poland’s border service said that 29,000 people had arrived from Ukraine on Thursday, and many more on Friday, leading to waits of more than 12 hours at some crossing points. More than 26,000 have fled Ukraine into Moldova, and a further 10,000 into Romania.

Among those fleeing into Poland Friday through a border crossing at Medyka were ethnic Russians like Oxana Aleksova, who were as appalled by the Kremlin’s lies, unprovoked violence and crude propaganda as were their Ukrainian compatriots.

Ms. Aleksova, 49, whose ethnic Ukrainian husband, a retired police officer, stayed behind, escaped into Poland with her 11-year-old daughter after waiting all night in a line of pedestrians and vehicles seeking entry to Poland — a line she said stretched for miles.

Her hometown of Khmelnytskyi, in western Ukraine, had not been hit directly, she said, but Russian bombs had fallen on a military airfield in a nearby town.

Russia’s military, she predicted, “will of course win eventually” because it has so many more soldiers and better equipment than Ukraine. But Mr. Putin’s goal, she added, “is not just to beat Ukraine but to make the whole world afraid of him.”

Whether he succeeds on that score is still an open question. But his implicit threats to use nuclear weapons against any foreign nations that intervene on Ukraine’s behalf have strengthened an already solid consensus among NATO members — even its most hawkish, anti-Russian members, like the Baltics states and Poland — to keep their troops out of Ukraine.

As Ukrainians flowed across the border into Poland, however, the government in Warsaw announced on Friday that a “convoy with ammunition” had flowed in the opposition direction into Ukraine. “We support Ukrainians and we firmly oppose Russian aggression,” Poland’s minister of defense, Mariusz Błaszczak, said.

Also passing into Ukraine were small groups of men who said they were returning home to fight. “We will beat Russia,” shouted a middle-aged returnee as he walked past the Polish border guards toward Ukrainian territory carrying a black duffle bag.

Just behind them was Viktor Dick, a German on his way to Kyiv to try to rescue his pregnant Ukrainian wife and their three children. He looked terrified but said he had to risk the perilous journey to the besieged capital to save his family.

As many as five million Ukrainians could flee into neighboring countries if the war drags on, confronting the European Union — which nearly buckled under a migration crisis in 2015 involving 1.5 million people — with another and possibly far larger influx of foreigners.

But in contrast to the earlier influx and a crisis last year involving would-be refugees traveling through Belarus into Poland and Lithuania, Europe’s most migrant-hostile governments in Poland and Hungary have generally welcomed Ukrainians.

When migrants from the Middle East and Afghanistan tried to sneak across the border from Belarus last year, Polish security forces beat them back with batons. At least a dozen died in the forests that straddle the border.

Refugees arriving from Ukraine, however, have been greeted with welcoming smiles, hot drinks and transport to the nearest railway station. Police officers handed out fruit, doughnuts and sandwiches to Ukrainians camped out in the waiting room.

Unlike the migrants beaten back from the border by Polish guards last year, Ukrainians, who are mostly Christian and white, have a legal right to enter Poland and other European Union countries without visas. Nearly a million Ukrainians already live in Poland.

And Ukrainian suffering at the hands of Russia has stirred sympathy in the formerly communist lands of East and Central Europe, where people have bitter memories of living under Moscow’s yoke.

Poland’s populist right-wing government, headed by the Law and Justice party, was in the vanguard of a drive to resist the European Union’s liberal migration policies in 2015, as was the Hungarian prime minister, Viktor Orban, but it is now organizing reception centers and temporary housing for Ukrainians.

“We will accept as many refugees as will be needed,” the deputy minister of defense, Marcin Ociepa, said on Monday.

Ludmyla Viytovych, who arrived Friday with her two children from Lviv, a city near the Polish border, said she was pleasantly surprised to find Poles so welcoming, even though her hometown has so far been spared the Kremlin’s wrath.

“It is mostly calm now,” she said, adding “but nobody knows what Russia’s next target will be.”

Lviv, Ukraine, long a bastion of Ukrainian patriotic fervor, has become a major staging post for people fleeing the capital, Kyiv, and heading further West into the European Union.

Yet, while Kyiv residents have been pouring westward, young men in the west have flowed in the opposite direction, their bravado and patriotic pride often mixed with deep anxiety about what awaits them if and when they reach the front line.

Framed by the Art Nouveau splendor of Lviv’s central train station, nervous soldiers smoked and women kissed their men goodbye on the platform, as if playing out movie scenes from what, until Monday, had seemed a bygone era.

Just across the border from Lviv, at the railway station in the Polish town of Przemysl, what could well be the last train from Kyiv arrived seven hours late, disgorging around 500 people, mostly women and children, onto a dimly lit platform. Though looking sleek and modern, the train took nearly 24 hours to cover just 350 miles from the Ukrainian capital to the eastern edge of Poland.

Russia’s invasion of Ukraine has not only plunged Europe into its biggest land war since the end of World War II in 1945 but left European politicians and many ordinary people suddenly feeling strangely out of place and out of time.

Ms. Zapotochna, the mother with the sick child, said she and her husband had decided that she should take their son to safety after Russian missiles destroyed an airport near their home in the town of Ivano-Frankovsk in southwest Ukraine on Monday morning. Her car journey to the Polish border took 28 hours.

“I hope we can go back. I need to go back. This is not my country,” she said, as her weeping mother-in-law, a resident of Poland who greeted her at the border, tried to comfort the sick baby.

“We are still living in the 21st century, I hope,” Ms. Zapotochna said.

Reporting contributed by Marc Santora in Lviv, Ukraine, and Anatol Magdziarz in Warsaw.