At Least 10 Are Injured in Explosion at Maryland Apartment Building 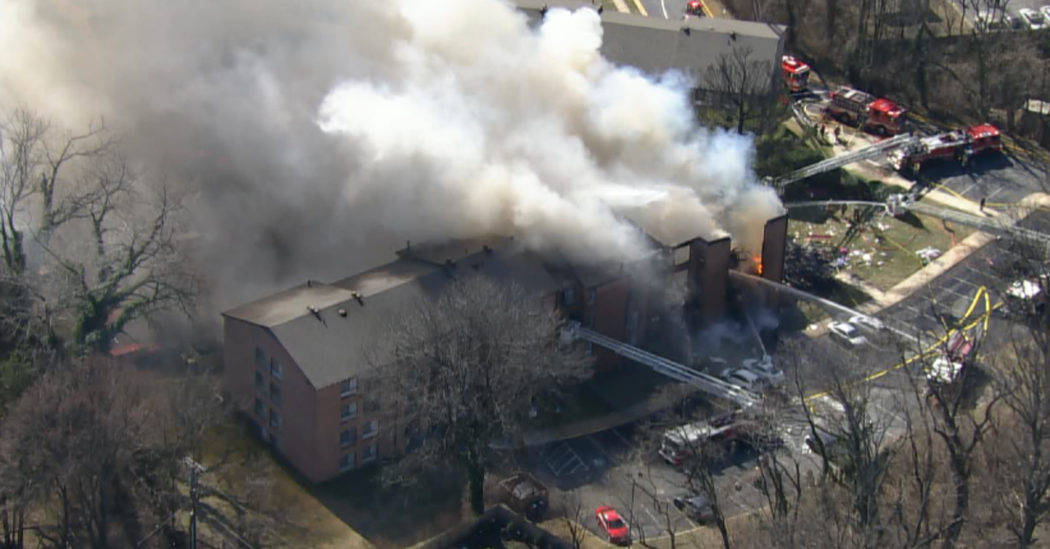 At least 10 people were injured, several of them seriously, in an explosion and fire that destroyed part of an apartment complex in Silver Spring, Md., on Thursday morning, fire officials said.

More than 100 firefighters responded to the fire, which was reported around 10:30 a.m. at the Friendly Garden Apartments, a four-story building made up of affordable units, officials said.

Chief Scott Goldstein of the Montgomery County Fire and Rescue Service said that 911 calls came in reporting an explosion at the complex in Silver Spring, just north of Washington. When rescue crews arrived, he said, they found a building engulfed in flames.

Large sections of the building were completely hollowed out by the fire, with only the facade and a side of the structure still standing. Large piles of broken bricks were seen near a parking lot. Many residents fled on their own or were rescued by firefighters.

Three people who were hurt in the fire had serious injuries, and seven had minor to moderate injuries, Chief Goldstein said. No deaths were reported on Thursday afternoon, but several people had yet to be accounted for, and rescue crews were still searching the area for survivors, he said.

“That number is still in flux,” he said.

In interviews with local television news stations, residents described harrowing scenes of people fleeing the apartment complex after the explosion. One resident said she saw a woman drop a baby from her window, then struggle to get out herself. One man fled from the building, holding a child.

Several said they smelled gas before and after the explosion, but the authorities said on Thursday afternoon that the cause of the fire was still unknown. Before Thursday, there had been no 911 calls reporting a gas leak or the smell of gas since Jan. 1, Chief Goldstein said at a news conference on Thursday afternoon.

By late in the afternoon, most of the fire had been extinguished, and crews were working to assess the stability of the buildings and to take down any remaining parts that could fall, Chief Goldstein said.

The Bureau of Alcohol, Tobacco and Firearms in Baltimore said on Twitter earlier on Thursday that investigators had responded to assist county officials with the investigation.

“This is obviously a really tragic event here,” Marc Elrich, the Montgomery County executive, told reporters at the scene of the fire. He said that the county would make sure the residents who lost their homes had shelter, and that it would help them “recover and return to some semblance of normal.”

Mr. Elrich said the county would support the displaced residents for “as long as it takes.”

“They can’t just pick up and go and find another place,” he said. “We know there is an absolute shortage of affordable housing to start with.”

At the news conference, Gabe Albornoz, president of the Montgomery County Council, said a staff member for the Council who lived in one of the affected buildings was at work when she found out about the explosion. Mr. Albornoz said the woman’s family had been located.

“But she has lost everything like so many families have here this afternoon,” he said.