As US neared 200,000 Covid deaths, Trump claimed it “affects virtually nobody” – Vox.com 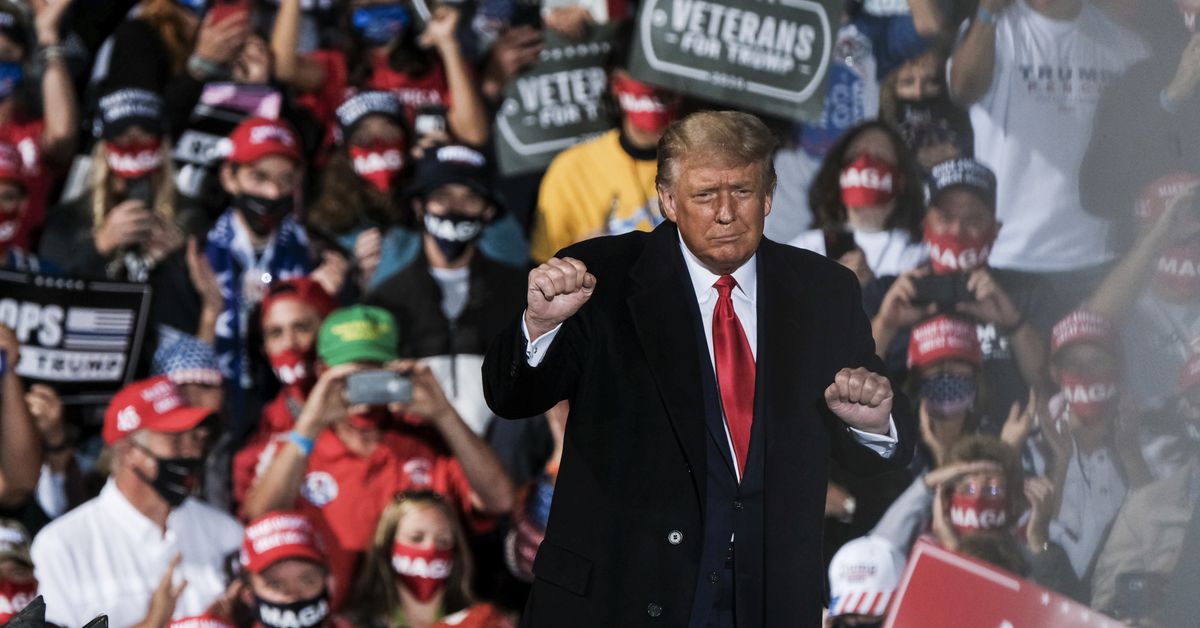 Instead of taking a moment to grieve the nearly 200,000 Americans who were confirmed to have died from Covid-19 as of his rally Monday evening in Swanton, Ohio, President Donald Trump erased them.

“It affects virtually nobody,” Trump said of the coronavirus. “It’s an amazing thing.”

By Tuesday morning, the disease had officially had killed 200,000 people in the US — a number more than the Revolutionary War, the War of 1812, the Mexican-American War, the Spanish-American War, World War I, the Korean War, the Vietnam War, the Gulf War, the Afghanistan War, and the Iraq War combined — and “affected” even more.

The president was trying to highlight how deaths from the virus are concentrated among older people and those with preexisting conditions — never mind that more than half of the US population falls into one or both of those categories — but he made his point in a remarkably callous, revealing way.

Here’s the full quote, in context, followed by the video.

You know, in some states, thousands of people, nobody young [dies]. Below the age of 18, like, nobody. They have a strong immune system, who knows. You look — take your hat off to the young, because they have a hell of an immune system. But it affects virtually nobody. It’s an amazing thing.

First off, it’s not the case that young people have no risk of bad outcomes if they catch Covid-19. According to data from the Centers for Disease Control and Prevention (CDC), 107 Americans age 18 or younger have died from the virus. That is a fraction of the US’s total deaths, but, to state the obvious, death isn’t the only way someone can be negatively affected by Covid-19.

A CDC study published last month found that there were 576 confirmed cases of children being hospitalized with Covid-19 between March 1 and July 25, with the hospitalization rate increasing over the summer. The number of child Covid-19 cases doubled between July and August, rising to 406,109, and the situation is likely to get worse before it gets better because of school reopenings.

While there’s a lot that is still unknown about the disease’s impact on children, and most infections in children under the age of 18 are “asymptomatic or mild,” children can be “at risk for severe Covid-19,” per the CDC. The Wall Street Journal reported recently that “some are reporting symptoms that persist for weeks, or the development of post-viral syndromes. Symptoms reported include fever, cough, headaches, shortness of breath and gastrointestinal problems.”

In short, Covid-19 is nothing to be cavalier about, regardless of age, and it’s irresponsible for the president to suggest otherwise — especially the day before Americans marked the grim milestone of 200,000 coronavirus deaths,

Trump’s comments are appalling but not surprising. Constructing a coronavirus alternate reality is a centerpiece of his flagging reelection campaign. Instead of grappling with the fact that the US has reported daily rates of 30,000 new confirmed coronavirus cases or more for months, Trump is back to having multiple political rallies each week featuring packed crowds, very few masks, and no social distancing. While many of them are outdoors (public health experts say improved air ventilation is a key aspect of decreasing risk), not all are.

To the extent that Trump talks about the ongoing pandemic at these rallies, it’s to reassure people that the worst of it is in the past and there’s no need for any further closures of schools or businesses — or really any public health measures whatsoever — because we know more about the virus than we did months ago.

But it’s worth noting that Trump doesn’t seem to be buying what he’s selling his supporters. Asked if he’s concerned about catching the coronavirus at one of his rallies following a speech in Nevada earlier this month, Trump said he’s not, because “I’m on a stage, it’s very far away, so I’m not at all concerned.”

Trump has also said things publicly that directly contradict the “it affects virtually nobody” talking point. During a March 19 interview with Bob Woodward that the Washington Post recently published audio of, Trump said, “Now, it’s turning out, it’s not just old people, Bob. Just today and yesterday, some startling facts came out. It’s not just older. It’s plenty of young people.” That was the same interview where Trump infamously told Woodward that he “wanted to always play it down” because “I don’t want to create a panic.”

There’s a big difference, however, between trying to keep people calm and misleading them. Trump’s comments in Swanton serve as perhaps the starkest illustration yet that he is willing to endanger his supporters in the hope of convincing them his failed coronavirus response is actually a success story, and that anybody who tells you otherwise is part of a political conspiracy aimed at taking him down.