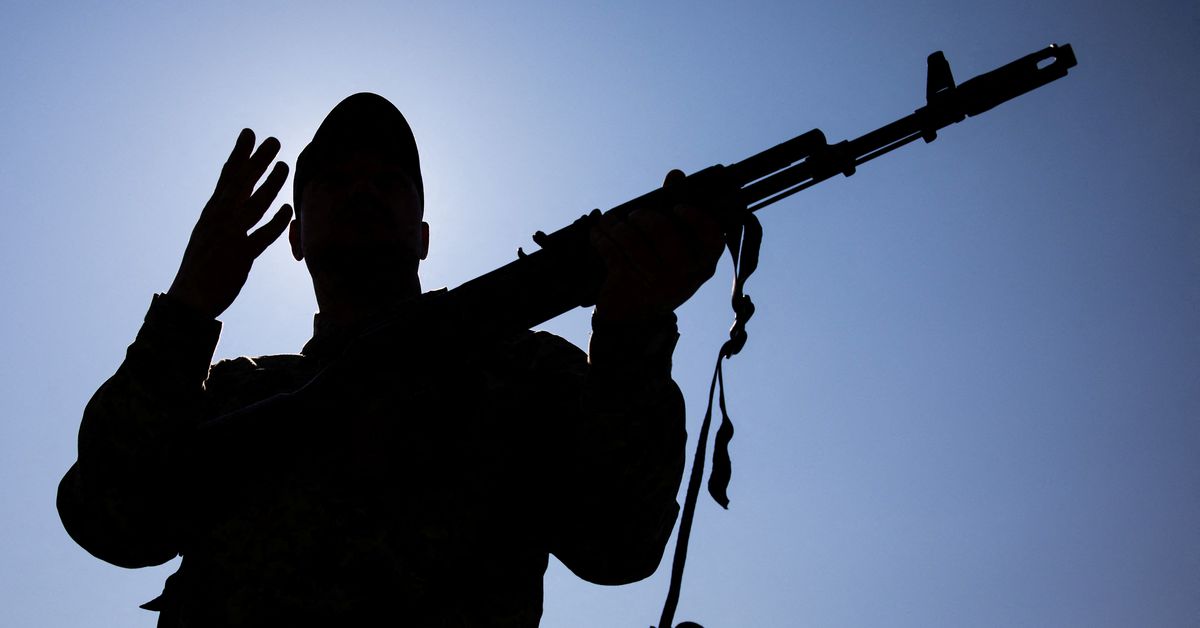 MARIUPOL/LVIV, Ukraine, March 26 (Reuters) – Ukrainian President Volodymyr Zelenskiy pushed for further talks with Russia as Moscow signalled it was scaling back its ambitions to focus on territory claimed by Russian-backed separatists in the east after attacks elsewhere stalled.

In an announcement on Friday appearing to indicate more limited goals, the Russian Defence Ministry said a first phase of its operation was mostly complete and it would now focus on the Donbas region bordering Russia, which has pro-Moscow separatist enclaves. read more

“The combat potential of the Armed Forces of Ukraine has been considerably reduced, which … makes it possible to focus our core efforts on achieving the main goal, the liberation of Donbas,” said Sergei Rudskoi, head of the Russian General Staff’s Main Operational Directorate.

Breakaway Russian-backed forces have been fighting Ukrainian forces in Donbas and the adjoining Luhansk region since 2014. They declared independence with Moscow’s blessing – but not recognised by the West – soon before the Feb. 24 invasion.

Moscow had said the goals for what it calls its “special operation” include demilitarising and “denazifying” its neighbour. Western officials say the invasion is unjustified and illegal, aimed at toppling Zelenskiy’s pro-NATO government.

“Our defenders are leading the Russian leadership to a simple and logical idea: we must talk, talk meaningfully, urgently and fairly,” Zelenskiy said.

In what officials billed as a major address in Poland U.S. President Joe Biden on Saturday “will deliver remarks on the united efforts of the free world to support the people of Ukraine, hold Russia accountable for its brutal war, and defend a future that is rooted in democratic principles,” the White House said in a statement. read more

The United Nations has confirmed 1,081 civilian deaths and 1,707 injuries in Ukraine since the invasion but says the real toll is likely higher.

Some 136 children have been killed so far been during the invasion, Ukraine’s prosecutor general office said on Saturday. read more

Silhouette of a Kyiv territorial defence member with a Kalashnikov rifle in his hands, as Russia’s invasion of Ukraine continues, in Kyiv, Ukraine, March 25, 2022. REUTERS/Mikhail Palinchak

Despite the carnage, Russian troops have failed to capture and hold any major city in the month since invading Ukraine. Instead, they have bombarded cities, laid waste to urban areas and driven a quarter of Ukraine’s 44 million people from their homes.

More than 3.7 million of them have fled abroad, half to neighbouring Poland in the west, where Biden on Friday met soldiers from the U.S. Army’s 82nd Airborne Division bolstering the NATO alliance’s eastern flank. read more

“Hundreds of thousands of people are being cut off from help by Russian forces and are besieged in places like Mariupol,” Biden said. “It’s like something out of a science fiction movie.”

Footage from the southeastern port, home to 400,000 before the war, showed destroyed buildings, burnt out vehicles and shell-shocked survivors venturing out for water and provisions. Residents have buried victims in makeshift graves as the ground thaws.

Local officials, citing witness accounts, said they estimated 300 people were killed in the bombing of a theatre in Mariupol on March 16.

The city council had not previously provided a toll and made clear it was not possible to determine an exact figure after the incident. Russia has denied bombing the theatre or targeting civilians. read more

Battle lines near Kyiv have been frozen for weeks with two main Russian armoured columns stuck northwest and east of the capital. A British intelligence report described a Ukrainian counteroffensive that had pushed Russians back in the east.

“Ukrainian counterattacks, and Russian forces falling back on overextended supply lines, have allowed Ukraine to reoccupy towns and defensive positions up to 35 km (22 miles) east of Kyiv,” the report said.

Volodymyr Borysenko, mayor of Boryspol, an eastern suburb where Kyiv’s main airport is located, said 20,000 civilians had evacuated the area, answering a call to clear out so Ukrainian troops could counterattack.

On the other main front outside Kyiv, to the capital’s northwest, Ukrainian forces have been trying to encircle Russian troops in the suburbs of Irpin, Bucha and Hostomel, reduced to ruins by heavy fighting.

The cities of Chernihiv, Kharkiv and Sumy north and east of Kyiv have also endured devastating bombardment. Chernihiv was effectively surrounded by Russian forces, its governor said.

Britain said it would fund 2 million pounds ($2.6 million) worth of food supplies for areas encircled by Russian forces, following a request from the Ukrainian government. read more

Thousands of miles from Ukraine, Russia was conducting military drills on islands claimed by Tokyo, Japanese media said on Saturday, days after Moscow halted peace talks with Japan because of its sanctions over the invasion of Ukraine. read more