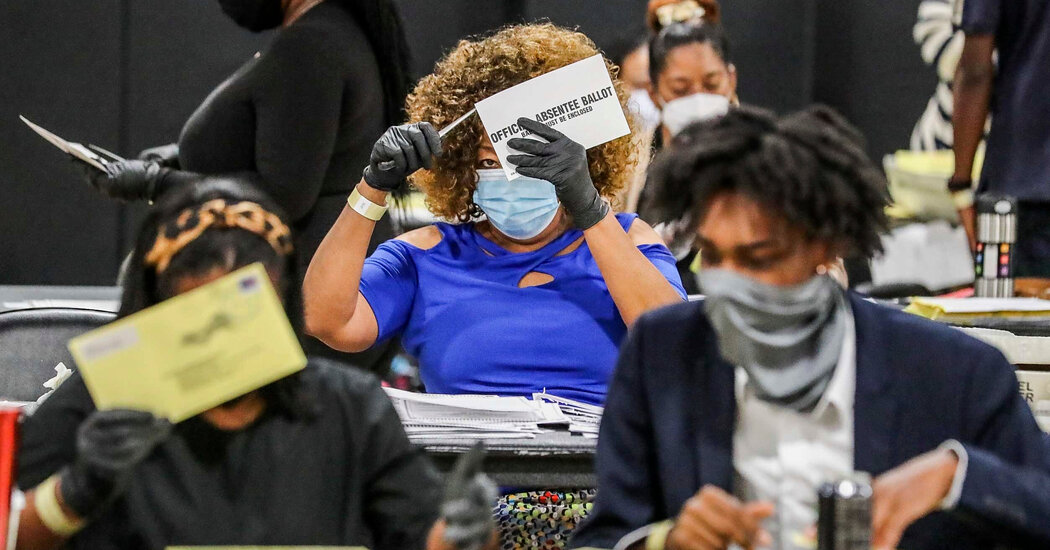 Republicans and Democrats are waging a legal trench war over the rules for casting a ballot in November that may have decisive consequences in some states. Republicans say they want to tighten voting requirements to prevent fraud, though experts say fraud is a minuscule election problem. Democrats favor rules that make it easier to vote.

Monday saw three developments in that legal war, all in states that could be competitive in the presidential election.

In Texas, the Republican attorney general filed suit to stop the chief election official in heavily Democratic Harris County — Houston, to most people — from sending applications to vote by mail to two million voters. The filing said the mailing would create confusion and encourage fraud.

Texas is mired in a deeply partisan battle over who should be able to cast an absentee ballot in a pandemic, with Republicans largely managing to defend restrictive state rules. Texas is one of just six states that prohibit voters worried about getting Covid-19 from casting ballots by mail instead of in person.

But no law bars county officials from sending applications to voters. The attorney general nevertheless argued that the mass mailing exceeds the authority “implied” under state law.

In Iowa, national Democrats sued to overturn an order by the Republican secretary of state that bars county clerks from sending voters absentee ballot applications that have been pre-completed with details like voters’ names and addresses. Paul Pate, Iowa’s secretary of state, has said that only blank applications are valid; Republicans argue that making voters fill in those missing details is an important security measure.

The issue has consequences: Last week, local judges in two Iowa counties invalidated some 64,000 pre-completed ballot requests that voters had already submitted, effectively making those voters repeat the process. Thousands of additional ballot applications that had been sent out but had not been returned also would be negated. The Democratic lawsuit argues that county officials have sent similarly completed ballot applications in past years without objection.

And in Georgia, a federal district judge sided with national Democrats and ordered an extension of the deadline by which absentee ballots must be received to be considered valid. Current rules invalidate any mail ballot received after the 7 p.m. closing of the polls on Election Day. The ruling extends that deadline to 7 p.m. on the third day after Election Day for any ballot that is postmarked no later than Election Day.

Citing the burdens of the pandemic — and noting that the state rejected 7,821 ballots as late in the state’s June primary election — the judge said the risk that valid votes would go uncounted was considerable.