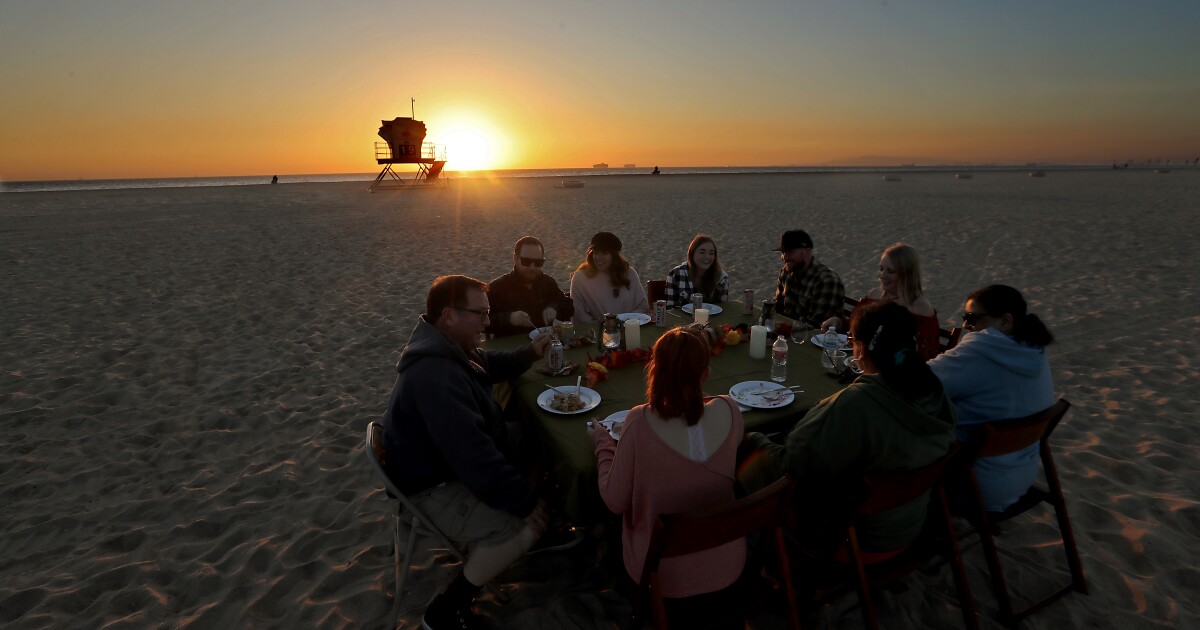 Los Angeles County was rapidly running out of time to prevent hospitals filling up with COVID-19 patients in the coming weeks as the virus continued an unprecedented surge and the Thanksgiving weekend presented perilous risks of further infections.

Officials had been hoping to enter the holiday with some signs that the latest surge was beginning to slow. But the coronavirus continues to spread at alarming rates, increasing the chances of more widespread transmission as people gather with family and friends.

Beginning Wednesday night, restaurants in much of L.A. County are to suspend outdoor dining. More restrictions could be coming as county elected officials review recommendations by the Department of Public Health.

L.A. County was reporting a seven-day average of nearly 4,300 new coronavirus cases a day as of Wednesday, the third consecutive day that number has hit a new high. Unless something dramatic is done to slow transmission, that number is on track to double within two weeks and quadruple in a month, said Dr. Christina Ghaly, L.A. County’s director of health services.

Officials said hospitals could see a shortage of beds — especially in intensive care units — over the next two to four weeks if these trends continue. Hospitals are better equipped now than they were in the spring to handle a surge in cases, treatment for COVID-19 has significantly improved, and hospitals can cancel elective surgeries to make more room for critical COVID patients.

But “that ability for hospitals to be able to surge and open up additional beds is not endless,” Ghaly said.

Countywide COVID-19 hospitalizations have already more than doubled in just three weeks, from about 800 on Halloween to just under 1,700 as of Tuesday.

“That really indicates and speaks to the extremely rapid spread of the virus not just among people who are young and healthy and who are asymptomatic, but people who are getting sick and … need to be in the hospital,” Ghaly said.

Given that confirmed infections have only continued to go up — and that it usually takes two to three weeks for those who have tested positive to fall ill enough to require professional medical care — it’s likely that number will continue to swell, Ghaly said.

This isn’t the first time county officials have warned of the potential perils the current coronavirus surge presents to the healthcare system. But the danger has only grown along with the case count.

Average daily infections in the county have quadrupled and daily deaths have tripled in a matter of weeks, a rate of growth that’s led to “the most alarming metrics we’ve ever seen,” said Barbara Ferrer, the county’s director of public health.

“The risk at this point is that overwhelming the healthcare system is now a very real possibility,” she told the L.A. County Board of Supervisors on Tuesday.

In the last seven weeks, the county’s number of new daily coronavirus cases, averaged over a seven-day period, has swelled from fewer than 1,000 to more than 4,000, a Times analysis has found. In the summer, that average topped out at 3,300.

The seven-day average of daily deaths had tripled since early November to 30 by Wednesday.

The skyrocketing hospitalization figures show two things, Ghaly said: that the virus is still widely circulating in the community and that its spread is not limited to those who can easily escape its ravages.

Should the number of COVID-19 patients continue to rise, Ghaly said, “people should be prepared to potentially have their nonessential surgeries or procedures canceled so that hospitals can make room,” as that is “really the biggest lever that hospitals and health systems have to very, very rapidly free up beds.”

Though hospitals have plans in place to expand their capacity if necessary, Ghaly said the bigger challenge is staffing — particularly in ICUs, where about a quarter of all COVID-19 patients end up.

There’s already a natural limitation on the number of people who are properly trained to provide ICU-level care, she said, and with California and much of the nation also experiencing a surge in cases, it will be far more difficult to call for staffing help if shortages reach crisis levels in L.A. County.

“I don’t want to minimize the gravity of the situation or the need for people really to take very seriously their behavior and what they’re doing that might be contributing to the increased transmission,” Ghaly said.

Within one to two weeks, officials say, the number of COVID-19 hospitalizations in L.A. County could grow 30% more, to around 2,200. That would equal the county’s highest total in the pandemic.

The rate at which coronavirus tests are coming back positive in L.A. County is now 6.6%, nearly double what it was in late October and triple the rate in San Francisco.

“These very large increases in cases and hospitalizations will, without a doubt, lead to increased numbers of people dying,” Ferrer said.

Already, more than 7,500 county residents have died of COVID-19, more than double the flu-related death toll from the last cold-and-flu season.

Hospitalizations are expected to continue soaring in the coming weeks as new infections are diagnosed.

State health officials have estimated that roughly 12% of those who’ve tested positive have ended up being hospitalized two to three weeks later, so a sustained and significant surge could stretch hospitals to their limits.

The state saw 16,681 new cases on Tuesday alone, the second-most in a single day behind only Monday’s figure of 20,654, according to an independent Times survey of California counties.

The state’s last significant coronavirus surge, after Memorial Day, was followed by a peak in daily deaths two months later.

If that pattern holds, it’s plausible that L.A. County could face a peak in daily COVID-19 deaths by Christmas or later.

In light of the surge, the county has advanced additional actions to control the spread of disease. A new order closing outdoor dining areas at restaurants for at least three weeks will go into effect Wednesday night.

That move has not been without controversy, though, and two members of the county Board of Supervisors pushed unsuccessfully to repeal it Tuesday.

County officials are also preparing a new health order that is expected to ban all gatherings, except for outdoor church services and outdoor protests, and reduce capacity at stores.

However, health officials did not unveil any new restrictions during their briefing Wednesday afternoon, saying that potential additional measures are still being discussed with the Board of Supervisors.

The state has also imposed new measures, most notablyan order prohibiting most nonessential activity outside the home from 10 p.m. to 5 a.m. in counties such as Los Angeles that are in the strictest, purple tier of the state’s color-coded reopening road map.

“Every day we wait to make those changes means that we’ll have another day of high cases, another day of pressure on our hospitals, and this is something that we all have agency and responsibility to change,” said Dr. Mark Ghaly, California’s health and human services secretary.

The problem now is that with infections much higher than ever, activities that seemed safe a month ago are now potentially far more dangerous.

“In general, what we know is, any time we get together with individuals where your guard comes down, your mask comes off, you are closer than a few feet apart, there’s a risk of transmission,” Mark Ghaly said.

Because the virus can be transmitted without the infected person ever becoming sick, he added, “most people who have COVID may not know it, you create a real risk … as those activities increase, we know that you’re going to see transmission.”

To explain the current increase in infections, officials cite the arrival of colder weather that keeps people indoors, raising the risk of transmission; increased travel from hard-hit states; gatherings to celebrate holidays or watch sporting events; protests and celebrations related to the recent election; an increase in workplace outbreaks; and a wrong belief that the danger of the pandemic has passed.

Health officials are particularly nervous that crowds could carry the virus with them as they travel for the Thanksgiving holiday, much as similar holiday travel in China for the Lunar New Year fueled the onset of the pandemic.

So far, California remains in a better situation overall than some other parts of the country where hospitals are already overwhelmed. But officials say they worry that that could easily change.

Pandemic control measures have twice worked in the past to dramatically slow the spread of the disease — first in the spring, when a sweeping stay-at-home order was imposed, and then again in the early summer, when Gov. Gavin Newsom ordered bars, indoor restaurants and movie theaters closed in the hardest-hit counties.