As Jackson Faces Senators, Her Criminal Defense Record Is a Target 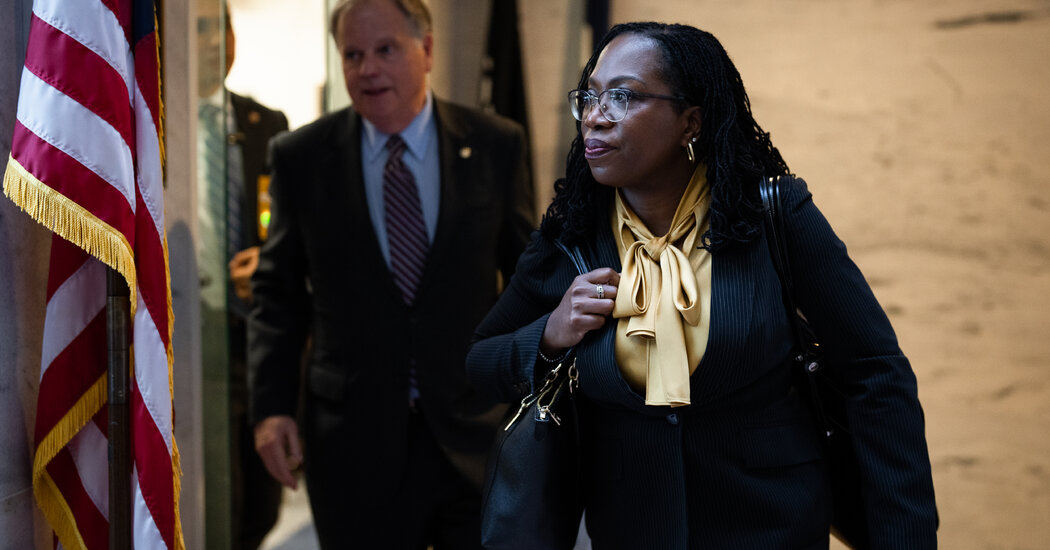 WASHINGTON — Senator Josh Hawley had a pointed question earlier this month for a federal appeals court nominee who, as a public defender, helped get a Pennsylvania man off death row despite his conviction for two brutal murders.

“Do you regret trying to prevent this individual who committed these heinous crimes from having justice served upon him?” asked Mr. Hawley, Republican of Missouri, as he grilled Arianna Freeman, President Biden’s pick for a seat on the Philadelphia-based U.S. Court of Appeals for the Third Circuit.

Last month, Senator Tom Cotton, Republican of Arkansas, asked Nina Morrison, a nominee for a Federal District Court seat in New York, whether she was “proud that you encourage such defiance in convicted murderers” when a man she represented declared to the prison warden that he would not be executed. Senator Ted Cruz, Republican of Texas, told Ms. Freeman she had “devoted your entire professional career to representing murderers, to representing rapists, representing child molesters.”

And Judge Ketanji Brown Jackson, the former public defender whose confirmation hearing for a seat on the Supreme Court begins next Monday, has been sharply questioned by Republicans for her work representing detainees at the U.S. military prison at Guantánamo Bay. In a background paper on her nomination for the high court, the Republican National Committee referred to Judge Jackson’s “advocacy for these terrorists” as “going beyond just giving them a competent defense.”

On Tuesday, Senator Mitch McConnell, the Kentucky Republican and minority leader, said in a floor speech that Judge Jackson had strong backing from progressive groups partially because of her history as a public defender, saying “the soft-on-crime brigade is squarely in Judge Jackson’s corner.”

The attacks reflect what has emerged in recent months as a Republican effort to vilify and discredit Biden administration judicial nominees who have served as public defenders, by suggesting that they acted inappropriately in representing clients accused of serious, sometimes vicious crimes.

Democrats say the tactic ignores a fundamental principle of the American justice system — that everyone has the constitutional right to be represented by counsel — and effectively seeks to disqualify from the bench anyone who has taken that obligation seriously when it comes to the accused.

The Republican strategy is a response to a concerted push by the Biden administration to diversify the federal bench by nominating more people with experience in criminal defense work, many of them women of color.

It is a sea change in the world of judicial nominations, where presidents of both political parties have long shied away from defense attorneys because of their susceptibility to political attacks tied to the crimes attributed to their clients, instead selecting tough-on-crime prosecutors. The type of high-profile murder cases handled by some of Mr. Biden’s nominees would have been considered disqualifying only a few years ago; now the president, who himself served briefly as a public defender early in his legal career, is actively seeking to name more jurists who have such experience, as well as to broaden racial diversity on the federal bench by naming more people of color.

The nomination of Judge Jackson, who would be the first public defender and the first Black woman to sit on the high court, will be the biggest test yet of whether a lawyer who represented accused criminals can draw broad Republican support. Her defense work and membership on a commission that reviewed sentencing guidelines will no doubt draw scrutiny during the upcoming hearing.

But she is hardly the only candidate who has faced such condemnation by Republicans. At least 20 other lawyers with significant public defender experience have been nominated by the Biden administration, representing about 30 percent of those considered by the Senate Judiciary Committee so far during Mr. Biden’s term. About half of them, including Ms. Jackson and Ms. Freeman, are women of color.

“We have never seen anything like this,” said Clark Neily, senior vice president for legal studies at the libertarian Cato Institute, who has studied the administration’s push to expand the ranks of defense attorneys on the bench.

Republicans on the Judiciary Committee have almost uniformly opposed the confirmation of public defenders. As they prepare for the Jackson hearings, G.O.P. senators say past work experience is fair game, even though the defenders may have been court-appointed in many cases to represent indigent defendants.

“Like any attorney who has been in any kind of practice, they are going to have to answer for the clients they represented and the arguments they made,” Mr. Hawley said.

He noted that the chief judge of the Pennsylvania Supreme Court had criticized the federal public defender office in which Ms. Freeman served as too aggressive and obstructionist.

“It is not every day that a chief justice of the court accuses an attorney of trying to systemically undermine a state’s law,’’ he said.

Ms. Freeman said she had simply been doing her job to the best of her ability, and pointed out that her client ultimately had prevailed at the Supreme Court because of “unlawfulness” and due process violations in the case.

“I can tell you that I represent individuals when I have been directed to do so by the court, and I fulfilled my duty to zealously advocate for those individuals,” she said at her hearing.

The tone of the Republican questioning of the public defenders has alarmed Democrats and has them bracing for tense moments during Judge Jackson’s hearings.

Senator Richard J. Durbin, Democrat of Illinois and the chairman of the Judiciary Committee, has argued that Republicans aim some of their harshest fire at “assertive women of color” to suggest they are “soft on crime.”

Democrats contend that these attacks are tied to a central element of Republicans’ midterm campaign strategy, which is to blame Democrats for an increase in crime by portraying them as unwilling to punish lawlessness and hostile to law enforcement.

“There’s a reason we see crime rates and murder rates and carjacking rates skyrocketing across this country, because the job of a judge is to follow the law, not to be a zealot pursuing a political agenda,” Mr. Cruz said at Ms. Freeman’s hearing.

Mr. Durbin called the remarks “fearmongering,” dismissing them as “unacceptable.”

“It is not somehow antithetical to the rule of law for an attorney to represent criminal defendants,” he said. “The cause of justice is served when there is effective and competent counsel at both tables in the courtroom.”

Others say it is a mistake to impugn lawyers for the clients they represent.

“I think it is extraordinarily shortsighted and unfair,” Mr. Neily said about the reflexive opposition to public defenders. “The job of a criminal defense attorney is not just to represent the interests of their client, but to also ensure the government doesn’t cut corners and abides by the rule of law.”

Emily Hughes, a professor at the University of Iowa College of Law who is on the board of the National Association for Public Defense, said it was wrong to assume that those with public defense experience would side with criminals.

“It doesn’t mean they are going to rule in favor of criminal defendants,” she said. “It means they bring a different perspective. Their experience on the other side of a case is just as important as a prosecutor’s experience on the opposite side.

Her supporters say Judge Jackson’s time as a public defender was a formative part of a distinguished career — including time as a lawyer in private practice, serving as a member of the sentencing commission and stints as a district and appellate judge — and only strengthens her qualifications. They also note that Judge Jackson has support from law enforcement groups.

“She was a public defender, but that doesn’t mean that she is soft on crime, that she’s pro-criminal,” said Doug Jones, the former Democratic senator from Alabama who has been helping guide Judge Jackson through her meetings with senators.

“There’s not a single public defender ever who was pro-crime,” Mr. Jones added. “They’re defending the Constitution and the rights of folks.”

Republicans deny that they are trying to bar an entire category of potential judges. Mr. Cotton said he did not believe that criminal defense work was disqualifying, but that it was only appropriate to judge nominees by the cases they had accepted.

He noted that Ms. Morrison, as a lawyer with the Innocence Project, chose to join in the post-conviction defense of Ledell Lee, a man convicted of multiple rapes and a murder in Arkansas and executed in 2017 as lawyers unsuccessfully pressed for DNA testing while professing his potential innocence.

“She was an activist, choosing to take on certain cases,” he said in an interview. “And that is a difference.”

The Judiciary Committee approved Ms. Morrison’s nomination last week with Senator Lindsey Graham, Republican of South Carolina, the only Republican to support it.

As for Judge Jackson, Mr. Cotton pressed her during her appeals court hearing last year on her work for terror detainees whom she was appointed to represent, though she continued to challenge Bush-era detention polices after she entered private practice.

“I’m sure we will have a chance to explore many issues with Judge Jackson,” Mr. Cotton said.

Sydney has wettest year on record with 2.2 metres of rain in 279 days

Hunter Biden could be charged with tax crimes