As Both Parties Gerrymander Furiously, State Courts Block the Way 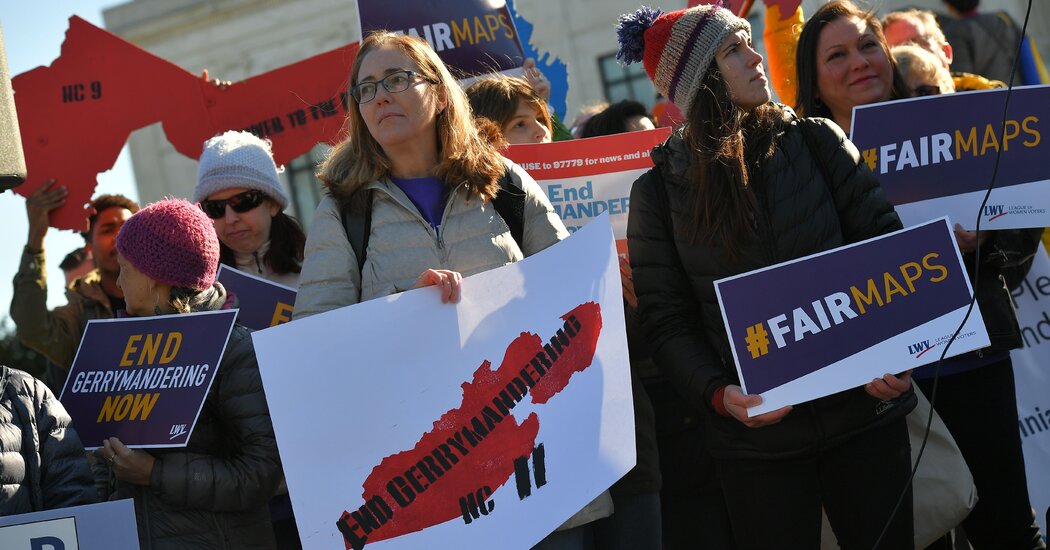 State courts in both Democratic and Republican states have been aggressively striking down gerrymandered political maps, as this year’s redistricting fights drag on and begin to create chaos in upcoming primary elections.

The flood of rulings reflects an emerging reality: that state courts, rather than federal ones, have become a primary firewall against gerrymandering as both Democrats and Republicans try to carve out maximum advantages in the maps they control. The parties have been emboldened to do so by a 2019 Supreme Court decision that federal courts cannot hear challenges to partisan gerrymandering, though they can still hear challenges to racial gerrymandering.

At the same time, however, state judges in at least five states — many, though not all, from the opposing party of the one that drew the districts — have slapped down contorted maps as illegal partisan gerrymanders.

“There’s a fire, and at least some people are holding the hose,” said Chad Dunn, an elections lawyer who has represented Democrats in redistricting cases.

Many appeals and final decisions remain, but for now the flurry of court decisions leaves the redistricting cycle roughly where it has stood for weeks: in a surprising draw.

Neither Republicans nor Democrats have gained a distinct advantage through the once-in-a-decade process in which state legislatures draw maps and the parties’ allies fight over them in the courts. This cycle has not proved to be the nightmare many Democrats had feared, but the recent court decisions have slowed their attempt to claw back to a more even map through aggressive gerrymandering of their own.

The legal back and forth has also left some states’ maps in limbo relatively late in the primary calendar, creating confusion in states like North Carolina and Maryland that have had to delay primary elections. Delays resulting from legal challenges are common in redistricting cycles, but the process is occurring especially late this year because the pandemic significantly delayed census results and slowed the start of redistricting.

In states like New York and North Carolina, the judge or justices striking down a party’s maps have come from the other party.

“It’s clearly a factor, and although I don’t want to call the courts partisan, judges matter,” said Michael Li, a redistricting expert at the Brennan Center for Justice. He added that judges who were willing to hear such cases, and decide them favorably for the challenger, often “happened to be the opposite party of the party that drew the maps.”

But in other cases, judges have defied political expectations.

Narrowly divided state supreme courts in Ohio and Wisconsin that are controlled by conservatives have sided with Democratic maps — though in each case the court has a swing justice who often sides with liberal members. And in Wisconsin, the State Supreme Court’s choice of a map drawn by Gov. Tony Evers, a Democrat, was later overturned by the U.S. Supreme Court.

In Maryland, an aggressive map drawn by Democrats was invalidated last week by a state court judge, Lynne Battaglia, who served as chief of staff to former Senator Barbara A. Mikulski, a five-term Democrat from Maryland who was appointed as the state’s U.S. attorney by President Bill Clinton.

Doug Mayer, the president of Fair Maps Maryland, the organization aligned with Gov. Larry Hogan, a Republican, that challenged the state’s maps, said that he had been told by his lawyers not to say anything in public about Judge Battaglia’s politics and that “I’m very glad I did.” Gerrymandering, Mr. Mayer said, should be a practice both major parties agree to eliminate.

“I think gerrymandering is voter suppression no matter who does it,” Mr. Mayer said. “Republicans who do it in Texas and North Carolina are just as bad as the S.O.B.s up here. More people need to say that.”

The Supreme Court this year has made inconsistent rulings about whether lower courts can order legislatures back to the drawing board.

In February, the justices reinstated an Alabama congressional map after a lower court had ordered the Republican-controlled state to draw a second Black-majority district. But in March, the Supreme Court invalidated a Wisconsin congressional map drawn by the state’s Democratic governor and ordered a new one to be produced.

“This unprecedented act and inconsistent application of judicial power are manifestly and sadly undemocratic,” said Eric H. Holder Jr., the former attorney general and the chairman of the National Democratic Redistricting Committee.

Marc Elias, a Democratic lawyer and prominent voting rights advocate, argued that his defense of maps that clearly help Democrats was not inconsistent with his fight against Republican gerrymanders.

“What voters expect will be a fair map in Alabama won’t necessarily be the same thing in a state like Maine,” he said. “I tend to look at the maps in the states and ask a question: ‘Is it legal or is it not legal?’ I leave it to others to be social scientists about whether they think it is objectionable or not for other reasons.”

State courts are a relatively new venue for redistricting cases. For decades, most legal challenges to gerrymandered maps played out in the federal courts, and the Voting Rights Act of 1965 was often used to challenge unfairly drawn districts.

But in 2017, four years after the Supreme Court hollowed out many of the protections of the Voting Rights Act, the League of Women Voters challenged Pennsylvania’s 2011 congressional maps in the state court system, arguing that the state’s Constitution “protects the right of voters to participate in the political process, to express political views, to affiliate with or support a political party, and to cast a vote.”

The Pennsylvania Supreme Court, which leaned Democratic, sided with the women’s group in January 2018, finding that the maps had “clearly, plainly and palpably” violated the state’s Constitution. The decision served as a signal to lawyers and good government groups across the country.