Arizona Gov. Doug Ducey Confirms He Will Not Run for Senate 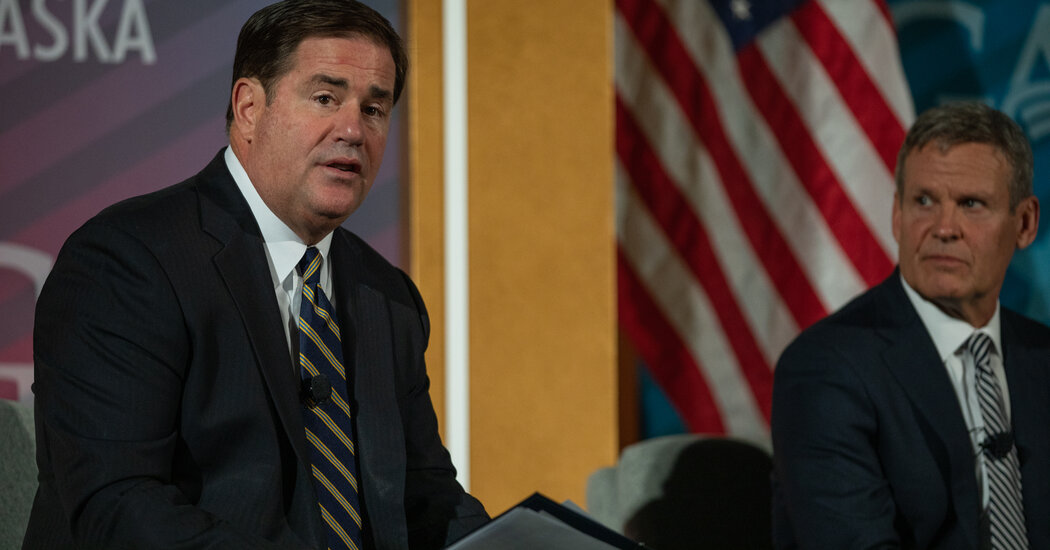 Gov. Doug Ducey of Arizona reaffirmed his decision Thursday not to run for the Senate this year, dealing a blow to Mitch McConnell, the Senate minority leader, while delighting former President Donald J. Trump, who for months had warned Mr. Ducey to stay out of the race.

Mr. Ducey, who is term-limited as governor, was one of the most sought-after Republicans that Mr. McConnell had been trying to recruit. In a letter to donors, Mr. Ducey seemed to allude to Mr. Trump’s hectoring, saying: “These days, if you’re going to run for public office, you have to really want the job.”

Angry that Mr. Ducey would not overturn Joseph R. Biden Jr.’s narrow 2020 victory in the state, Mr. Trump has rampaged for over a year, complaining about Mr. Ducey’s certification of the electoral results and threatening him about the Senate race.

“Right now I have the job I want,” Mr. Ducey wrote, “and my intention is to close my years of service to Arizona with a very productive final legislative session and to help elect Republican governors across the country in my role as chairman of the Republican Governors Association.”

Mr. Ducey’s decision was long expected. For months, he had told both reporters pressing him and Republicans courting him that he had little appetite to challenge Senator Mark Kelly, a first-term Democrat.

That did not stop Mr. McConnell, whose attempts to recruit two other Republican governors, Chris Sununu of New Hampshire and Larry Hogan of Maryland, into Senate races were also rebuffed.

Taken together, the rejections illustrate the difficulty Senate Republicans are having in trying to lure mainstream conservative governors to serve in a party still shadowed by Mr. Trump and in a polarized capital that can offer less policymaking opportunity than statehouses. Moreover, many of the state executives are more interested in the presidency than the Senate.

“By nature and by training I’m an executive,” wrote Mr. Ducey, who in an interview last month mused that senators seem only to “tweet all day, do a 5 p.m. news hit and go out for the rest of the night.”

It’s not clear which of the Republicans in the remaining field would be best-positioned to defeat Mr. Kelly, who began the year with $18 million in campaign cash. Attorney General Mark Brnovich has led a handful of lesser-known Republicans in some polls ahead of the August primary, but the race has been frozen as G.O.P. officials implored Mr. Ducey to run.

A parade of prominent Republican leaders, including former President George W. Bush and Karl Rove as well as Mr. McConnell and his lieutenants, lobbied the Arizona governor, some sharing polling that indicated Mr. Trump’s declining influence in primaries.

The array of anti-Trump Republicans believed Mr. Ducey, a popular two-term governor and former chief of Cold Stone Creamery, would be their party’s strongest candidate and would also send a message about what they believe is Mr. Trump’s diminishing clout.

“MAGA will never accept RINO Governor Doug Ducey of Arizona running for the U.S. Senate,” Mr. Trump said in a statement last month after a Times article detailed the wooing of the governor. “So save your time, money, and energy, Mitch!”

In Mr. Ducey’s letter on Thursday, which was first reported by The Arizona Republic, he made no direct mention of Mr. Trump. But the governor did make a point to single out Mr. McConnell, who had been his most ardent pursuer.

“The only downside about any of this is that it would be an honor to serve with Senator Mitch McConnell,” he wrote. “I consider him an historic figure and one of the Titans of the Senate, and I am supportive of everything he’s doing to elect Republican senators and wrest back control from Chuck Schumer.”

Mr. Ducey, who became close to Mr. McConnell when the two collaborated on who would be appointed to fill Mr. McCain’s seat after his death in 2018, also indicated in the letter that he was considering “perhaps weighing in” with an endorsement in the Senate primary.

For his part, Mr. Trump has not formally intervened in the primary — at least not in support of a candidate.