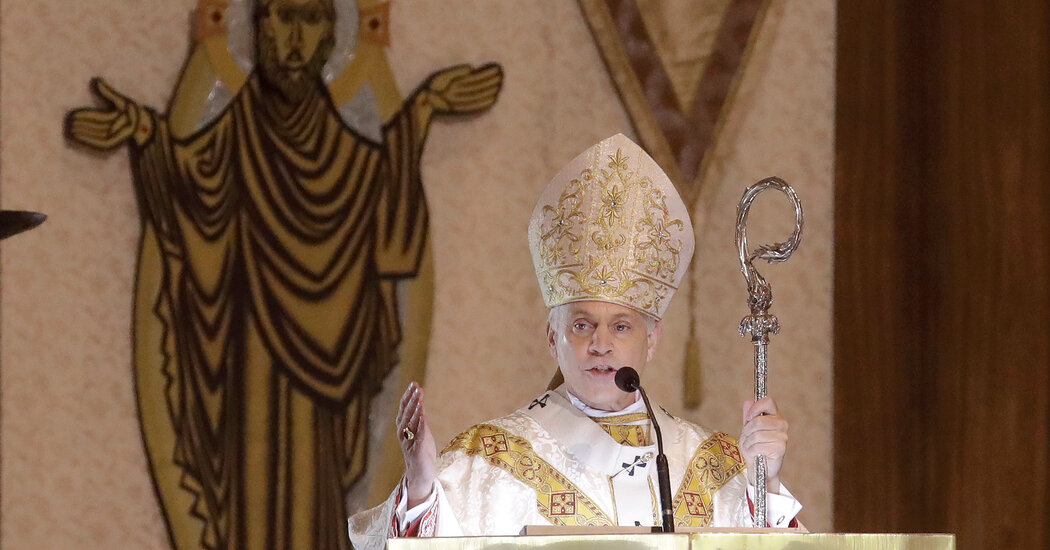 WASHINGTON — An ultraconservative archbishop in San Francisco said on Friday that Speaker Nancy Pelosi of California would not be permitted to receive communion in his archdiocese because of her support for abortion rights.

Archbishop Salvatore J. Cordileone, who has repeatedly confronted Ms. Pelosi over abortion, said in a letter on Friday that until Ms. Pelosi was willing to “publicly repudiate” her position defending the “legitimacy of abortion,” she would be banned from the sacrament, a central element of Catholic worship.

“After numerous attempts to speak with Speaker Pelosi to help her understand the grave evil she is perpetrating, the scandal she is causing” and “the danger to her own soul she is risking, I have determined that she is not to be admitted to Holy Communion,” Archbishop Cordileone said on Twitter on Friday.

A spokesman for Ms. Pelosi, a practicing Catholic who often mentions her faith in advocating for her progressive views, did not respond to a request for comment. In a 2008 interview with C-SPAN, Ms. Pelosi described herself as a “regular communicant” and said that if she were ever denied communion, “that would be a severe blow to me.”

The Catholic church explicitly opposes abortion, which it considers among the gravest sins. Archbishop Cordileone is an outspoken critic of abortion and same-sex marriage, and he has also said he did not get vaccinated for the coronavirus.

Last summer, he objected after Ms. Pelosi referred to herself as a “devout Catholic” in a news conference during which she expressed support for efforts to allow federal funding of abortions.

From Opinion: A Challenge to Roe v. Wade

“No one can claim to be a devout Catholic and condone the killing of innocent human life, let alone have the government pay for it,” he said in a statement at the time.

He also threw his support behind an earlier attempt to bar President Biden, the country’s second Catholic president, from receiving communion because of his support for abortion rights.

That effort failed, after Cardinal Wilton Gregory of Washington said he would not bar the president from receiving communion.

Archbishop Cordileone’s move aimed at Ms. Pelosi came as Democrats in Congress have been trying, and failing, to push forward legislation to guarantee abortion rights nationwide, after a leaked Supreme Court draft opinion suggested that the court may be on the brink of overturning the nearly 50-year-old ruling that legalized abortion.

It was the latest sign of the growing rift within the church between conservative American bishops and the Vatican.

The Vatican has warned against denying communion to politicians supportive of abortion rights. Pope Francis has preached that communion “is not the reward of saints, but the bread of sinners.”

The State of Roe v. Wade

What is Roe v. Wade? Roe v. Wade is a landmark Supreme court decision that legalized abortion across the United States. The 7-2 ruling was announced on Jan. 22, 1973. Justice Harry A. Blackmun, a modest Midwestern Republican and a defender of the right to abortion, wrote the majority opinion.

What was the case about? The ruling struck down laws in many states that had barred abortion, declaring that they could not ban the procedure before the point at which a fetus can survive outside the womb. That point, known as fetal viability, was around 28 weeks when Roe was decided. Today, most experts estimate it to be about 23 or 24 weeks.

What else did the case do? Roe v. Wade created a framework to govern abortion regulation based on the trimesters of pregnancy. In the first trimester, it allowed almost no regulations. In the second, it allowed regulations to protect women’s health. In the third, it allowed states to ban abortions so long as exceptions were made to protect the life and health of the mother. In 1992, the court tossed that framework, while affirming Roe’s essential holding.

But some leading American bishops have pushed forward anyway.

Conservative bishops have tried to depict Mr. Biden as a threat to the church, given his endorsement of policies that “advance moral evils and threaten human life and dignity, most seriously in the areas of abortion, contraception, marriage and gender,” as Archbishop José H. Gomez of Los Angeles put it in a statement on Mr. Biden’s Inauguration Day.

At a meeting last fall, bishops approved new guidance on the topic that backed away from a direct conflict with the president and high-profile Catholic Democrats like Ms. Pelosi. The document did not single out individuals, but it emphasized that bishops have a “special responsibility” to intervene when a congregant’s prominent public actions are in conflict with church teaching.

Bishops who are seen as allies of Pope Francis cautioned that encouraging bishops to deny communion to certain politicians would lead to a “weaponization of the eucharist.” But others backed the move.

“I support Archbishop Cordileone in his courageous pastoral outreach to a member of his flock,” Bishop James D. Conley of the Diocese of Lincoln, Neb., said on Twitter.

In his letter, Archbishop Cordileone also noted that Ms. Pelosi has refused to speak with him since voting for the Women’s Health Protection Act, a bill to ensure abortion access nationwide, in September.

Growing up in Baltimore, Ms. Pelosi regularly attended Mass with her family and went to Catholic school. She has said her mother had hoped she would become a nun.

Ms. Pelosi often refers to her faith in discussing her position in support of abortion rights.

“I come to this as a Catholic mother of five in six years and one week, and with the joy that all that meant to us,” she said on the House floor last year, speaking in support of the bill. “But with the recognition that it was my husband and I — our decision. It was our decision. And we should not, in this body or in that court, be making decisions for the women in America.”

She has criticized her church for making the issue of abortion a litmus test for membership.

“They would like to throw me out, but I’m not going, because I don’t want to make their day,” she said at an event in March.