Anti-Abortion Activists Claim They Had 115 Fetuses From Clinic 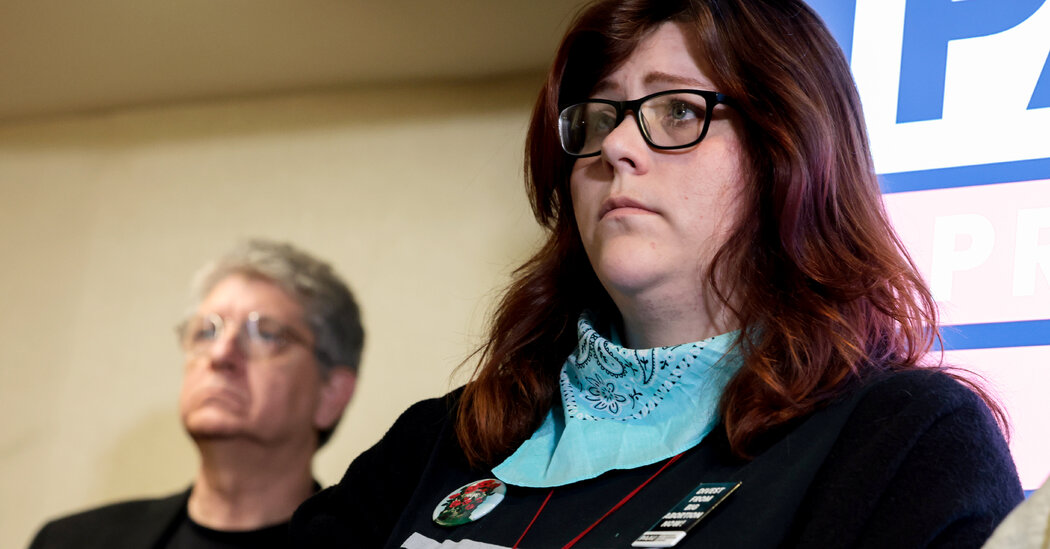 Anti-abortion activists claimed on Tuesday that five fetuses that were removed from an apartment in Washington last week had been in a box containing a total of 115 that the driver of a medical waste truck voluntarily allowed them to take from his dolly outside an abortion clinic.

The driver’s employer, Curtis Bay Medical Waste Services, denied their account and added that the use of its services to dispose of fetuses was against company policy.

It was the latest turn in an investigation that burst into public view last Wednesday, the same day that Lauren Handy, 28, an anti-abortion activist, was arrested and charged, along with eight others, with illegally blocking access to a Washington abortion clinic in October 2020.

Separately from that federal investigation, the Metropolitan Police in Washington, D.C., said that they had removed the five fetuses from an apartment where Ms. Handy said she lived, prompting questions about where they came from and why she had them.

At a news conference on Tuesday, Ms. Handy, the director of activism at a group called Progressive Anti-Abortion Uprising; Terrisa Bukovinac, the group’s founder and executive director; and Randall Terry, the founder of the anti-abortion group Operation Rescue, sought to answer those questions.

They claimed that Ms. Handy and Ms. Bukovinac had gone to the Washington Surgi-Clinic to protest abortions on March 25 when they happened upon a Curtis Bay driver who was loading boxes outside. They told him there were “dead babies” inside, they said, and asked him if he would get in trouble if they took one of the boxes.

When he asked what they planned to do with it, they promised a “proper burial,” and he said, “OK,” and gestured toward his dolly, they said. Ms. Handy grabbed one of the boxes, and took it back to her apartment, she said.

The two women said that a Roman Catholic priest said Mass, and that they read aloud names that they gave to the fetuses before 110 of them were buried, with a priest present, at a location they declined to disclose.

They said their lawyer then contacted the Washington police to pick up the five remaining ones, which the activists said they considered evidence of violations of federal laws, including the Partial-Birth Abortion Ban Act, which bans certain methods to terminate pregnancies starting at 12 weeks.

At the news conference, they showed pictures of a Curtis Bay truck and a box with the company’s name as well as graphic video of what they described as Ms. Bukovinac and Ms. Handy opening the box at the apartment.

“Pro-life Americans will not stay silent in the face of such aggressive and barbarous violence,” said Ms. Bukovinac, who identified herself as an atheist and a “leftist.”

“On March 25, a Curtis Bay employee took custody of three packages from the Washington Surgery Center (Washington Surgi-Clinic) and delivered all of them to Curtis Bay’s incineration facility,” the company said in a statement. The driver did not hand packages over to the protesters or anyone else, it said. “Any allegations made otherwise are false.”

The company, which said it was cooperating with the police, added that its client agreements prohibit customers “from disposing of fetuses and human remains” using its services.

The Washington Surgi-Clinic referred questions to the National Abortion Federation, which said that providers comply with state and federal laws that regulate the handling of tissue.

“Anti-abortion individuals and groups are increasingly resorting to extreme and illegal antics to attempt to intimidate clinic workers and patients, and stop them from seeking or providing abortion care,” Melissa Fowler, the federation’s chief program officer, said in a statement. She said the groups were making false claims to encourage “medically unnecessary and politically motivated” legislative restrictions to push safe and affordable abortion care out of reach.

The Washington police declined on Tuesday to comment on the anti-abortion group’s latest claims, but said the case “remains under active investigation.”

The police said last week that five fetuses were seized on March 30 after the police received a tip about “potential biohazard material.” They were handed over to the Office of the Chief Medical Examiner.

At a news conference on Thursday, Ashan M. Benedict, the executive assistant chief of police, said the investigation did not focus on the abortions, which were legal under Washington law.

“There doesn’t seem to be anything criminal in nature right now about that, except for how they got into this house,” Chief Benedict said, “and so we’ll continue to look at that.”

Last Wednesday, the Justice Department said Ms. Handy was one of nine people who had been charged with using chairs, ropes, chains and their bodies to block access to a Washington abortion clinic on Oct. 22, 2020, in violation of the federal Freedom of Access to Clinic Entrances Act.

Court papers did not identify the clinic, but Ms. Handy and Ms. Bukovinac said it was the Washington Surgi-Clinic.

If convicted, the defendants would each face up to 11 years in prison, three years of supervised release and fines of $350,000, prosecutors said.

“I don’t believe I did anything wrong,” said Ms. Handy, who identified herself in an interview as a Catholic and an anarchist. “We try to rescue a baby on a particular day, and we try to let the chips fall where they may.”