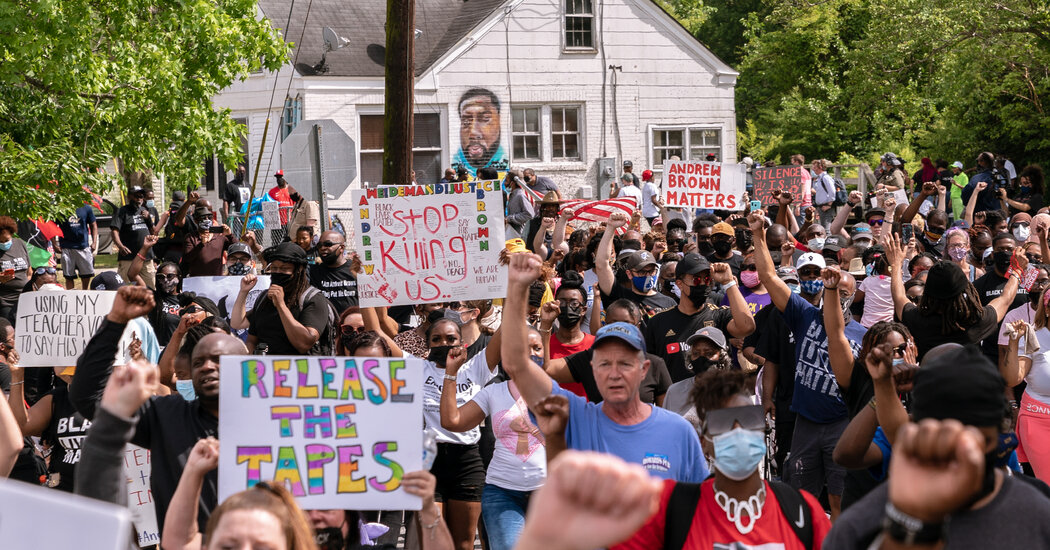 A North Carolina prosecutor said on Tuesday that sheriff’s deputies were justified in the fatal shooting of Andrew Brown Jr. because he used his car as a “deadly weapon” while trying to evade arrest.

But body camera footage released for the first time by the prosecutor, R. Andrew Womble, is unlikely to quell the intense debate about whether the deputies should be held criminally responsible for the death of Mr. Brown, a Black man. He was killed on the morning of April 21 as they served drug-related arrest warrants at his house in Elizabeth City, N.C.

The video shows Mr. Brown trying to drive away from officers, but the prosecutor said that as soon as Mr. Brown used the vehicle against the orders of the deputies, it became a potentially deadly weapon, and they were justified in using deadly force.

A slow-motion review of the video by The New York Times shows Mr. Brown appearing to clip a deputy as he begins to drive in reverse. Mr. Brown then pulls forward, toward the same deputy, trying to drive away between him and a second deputy.

As he appears to be directing the car away from the deputy in front of him — who briefly places his left hand on the hood of the car — an officer fires the first shot, according to the Times review. The car does not appear to be moving particularly fast in the moments before the three Pasquotank County sheriff’s deputies fire a total of 14 shots in his direction.

Mr. Womble’s decision essentially closes the state-level criminal case, although a federal civil rights investigation is ongoing. But the shooting is likely to continue animating unsettled questions about police transparency and accountability in deadly encounters with African-Americans.

Mr. Brown, 42, was slain just days after a jury found a Minneapolis police officer guilty of murdering George Floyd, and his case has reminded his family and many activists that prosecutions of police shootings remain difficult to attain. In Mr. Brown’s case, there was also an extended delay before the release of body and dash cam video of the shooting; a judge had rejected the sheriff’s request to release the videos, citing concerns that it would harm the investigation.

In a news conference on Tuesday, Mr. Womble, the district attorney for a seven-county swatch of eastern North Carolina, said the facts “clearly illustrate the officers who used deadly force on Andrew Brown Jr. did so reasonably, and only when a violent felon used a deadly weapon to place their lives in danger.”

He added that “the decision to flee, which Brown made on his own, quickly escalated the situation from a show of force to an employment of force.” The “precise speed” of the car is uncertain, he said, “But that he drove recklessly and endangered the officers is not uncertain.”

Bakari Sellers, a lawyer for Mr. Brown’s family, said that the newly released video, which he viewed for the first time on Tuesday morning, showed what the legal team had asserted all along: “An unjustified shooting.”

In a video statement on Tuesday, Sheriff Tommy Wooten II of Pasquotank County said the three officers who shot at Mr. Brown would keep their jobs, but would be disciplined and retrained.

Among other issues, Mr. Wooten said, two of the deputies on the scene did not turn on their body cameras, and the SWAT team that served the warrants did not have an emergency medical team nearby.

“This should not have happened this way at all,” the sheriff said. “While the deputies did not break the law, we all wish things could have gone differently. Much differently.”

Mr. Brown’s family members and their lawyers, some of whom had earlier seen video footage of the shooting, have described it as an “execution,” arguing that deputies overreacted by opening fire on a man who was trying to get away from them, not hurt them.

“We did not see any actions on Mr. Brown’s part where he made contact with them or try to go in their direction,” Chance D. Lynch, a lawyer for the family, said earlier this month after he had reviewed about 20 minutes of the recordings. “In fact, he did just the opposite.”

Mr. Womble did not release all of the roughly two hours of footage on Tuesday, saying that it was not within his power to do so. Instead, he showed brief snippets during a news conference in which he gave his own analysis of the encounter.

He said an official autopsy showed that Mr. Brown was shot twice, including in the head, during an interaction that took a total of 44 seconds. The forensic pathologist found a bag with a substance containing what is believed to be crystal methamphetamine in Mr. Brown’s mouth, Mr. Womble said.

The prosecutor said that when Mr. Brown put his car in reverse, Sgt. Joel Lunsford, who had his hand on the driver’s-side door handle, “was pulled over the hood of Brown’s vehicle, where his body and his safety equipment were struck by the vehicle.”

Mr. Womble said that Mr. Brown ignored deputies’ commands to stop, continued to back up and then put the car in drive. At that point, Sergeant Lunsford was “directly in front of the vehicle,” Mr. Womble said, and Mr. Brown drove directly at him.

“It was at this moment that the first shot was fired,” Mr. Womble said. It went through the front windshield. Then multiple shots rang out.

The officers, Mr. Womble said, were “duty-bound to stand their ground, carry through on the performance of their duties, and take Andrew Brown into custody.”

“They could not simply let him go, as has been suggested,” he added.

Paul Butler, a former prosecutor who is now a law professor at Georgetown University and an expert on race and policing, said prosecutors have wide latitude to claim that something is a deadly weapon. He recalled that during his training as a prosecutor, one of the cases he studied involved a shoe being declared a deadly weapon.

“A deadly weapon can be anything,” he said. “It could be a brick or a gun or a car. The point is it isn’t unusual for prosecutors to charge various objects as deadly weapons.”

Mr. Butler said of the Brown case, “I think the most important question is whether Mr. Brown was trying to escape or was he trying to run over the officers?” He continued, “it’s certainly the case that it’s possible he reasonably presented a deadly threat to the officers, but I don’t think we have enough information to rely on the prosecutor’s claim at this point.”

Mr. Sellers said the family’s legal team had filed a petition asking the courts to release the full footage, as well as the results of an investigation performed by the North Carolina State Bureau of Investigation.

Gov. Roy Cooper of North Carolina, a Democrat, reiterated on Tuesday his call for Mr. Womble to turn the case over to a special prosecutor, arguing that the prosecutor worked closely with Pasquotank County deputies as part of his job. Mr. Womble said on Tuesday that a special prosecutor was not accountable to the people of North Carolina’s seven-county First Judicial District. “I am,” he said.

In August, the American Bar Association adopted a resolution calling on local governments to pass laws that require the appointment of an independent special prosecutor to look into cases involving lethal force used by law enforcement.

“Prosecutors often consider police officers to be their teammates and may fear that prosecuting an officer will result in other officers refusing to testify in their other cases,” the resolution said.

Ronald Wright, a professor of criminal law and criminal procedure at Wake Forest University in Winston-Salem, N.C., said Mr. Womble’s decision most likely ended the possibility of any state-level criminal prosecution of the officers.

But he said that Mr. Womble’s decision does not prevent the Brown family from pursuing civil litigation. He also noted that the federal investigation of the shooting could potentially include exploring whether the deputies deprived Mr. Brown of his constitutional rights by using excessive force.

The investigation is being carried out by the F.B.I., which is working with federal prosecutors and the civil rights division of the Justice Department.

In a statement on Tuesday, the Rev. Dr. William Barber II, a prominent North Carolina civil rights activist, called for a “pattern and practice review of law enforcement in Pasquotank County.”

Dr. Barber said that Mr. Womble “has given the appearance of acting as a defense attorney for the deputies in this case, and his presentation of the evidence has not been subject to cross-examination.”

“His claim that ‘they could not simply let him go,’” he continued, “is a statement that Mr. Womble understood warrants in this case to be a license to kill.”

“It shows you why you shouldn’t take any solace in the George Floyd verdict,” Mr. Sellers said. “Because justice in cases like this is so fleeting. What we saw today illustrates just how difficult it is for officers to be held accountable.”