An Update to the California Playlist 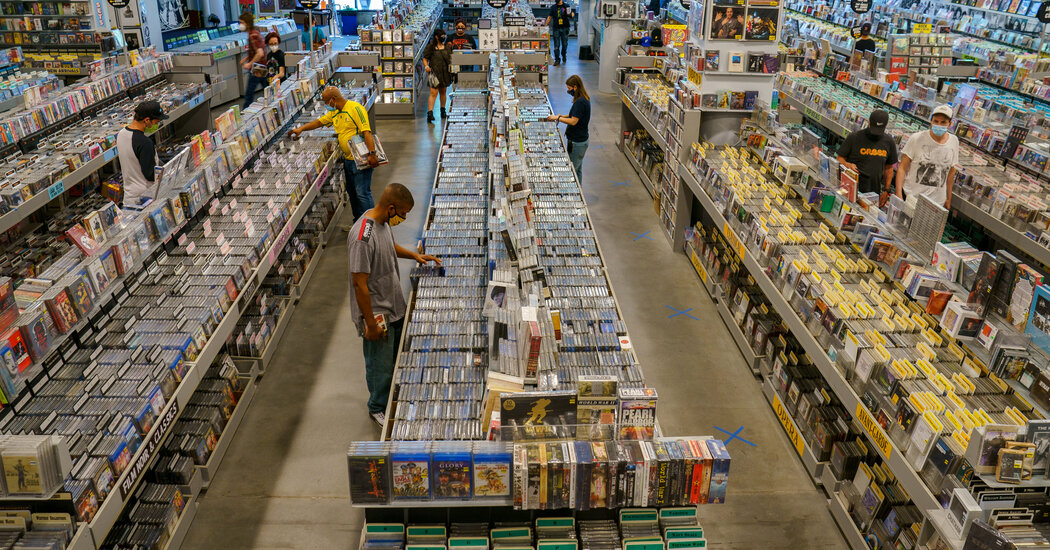 Today I’m back yet again with updates to the California Soundtrack, our project that tries to capture the essence of the Golden State in a single playlist.

I’ve added dozens of songs based on your recommendations. Some of the most requested in this round were “Monterey” by the Animals (1968), Frank Zappa’s “Valley Girl” (1982) and John Mayer’s “Queen of California” (2012).

You can peruse the full list of California songs here (the latest additions are in bold) or listen here.

As always, the California Soundtrack is a work in progress that we’ll continue editing and building. Email your Golden State song recommendation and a few lines about why you think it deserves inclusion to CAToday@nytimes.com.

And now for some of your latest picks:

“Rivers Cuomo singing ‘California life is all right with me’ was on repeat through the pandemic helping remind me how grateful I feel to live in the Golden State.” — Peter Koshland, Berkeley

“California might be sunny and nice, but it is also dark and rainy, a weather perfectly caught by Jerry Garcia and his lyricist Robert Hunter on this beautiful song telling of a melancholy walk through the rain in the Mission district of San Francisco. And I learned about the reality of the San Francisco melancholy when moving to America and to the East Bay in 2008. And yes, ‘There’s some satisfaction in the San Francisco rain.’” — Ulf Olsson, Emeryville

“This ‘cruising song’ could be heard at night from the cars of high school teens — often, a ’56 or ’57 Chevy — on the major thoroughfares of many California cities — not just Whittier.” — Jim Davis, Northridge

“In 1980 I was working at a small radio station in the West of England. Two of my fellow engineers had taken a vacation in the U.S.A., renting an R.V. and traveling through California. It being the ’80s, the only way to document their journey was with 35-millimeter slides. The (seemingly) hourslong slide show they created when they got back used the Diesel track for a part of the presentation. The song never got any airplay in the U.K. and none of us could have pointed out the location of the city on a map.

Twenty years later, I started a new chapter in my career, and found myself living in, of all places, Sausalito, where I have now retired.” — Doug Ford, Sausalito

“Just so darn catchy and really a testament to Weezer’s ability to toe the line between being iconic rockers and a band of nerds that we all can identify with.” — Michael Messina, Sacramento

“I was living in Palo Alto in 1985 with my first ‘real job,’ but my friends were moving away because we could not buy houses (funny how things don’t change…). I took a job in Knoxville, Tenn., and would listen to this song driving in my new convertible (which I bought in California) and get really melancholic — ‘Nobody on the road, nobody on the beach.’

I realized I made a very bad move; it took me one year, five months and nine days to make it back here.” — Scott Boutwell, Geyserville

A giant earthquake. A massive flood. Wildfires followed by choking smoke. An ice storm that knocks out the power for days. Can you build a structure that could withstand them all?

“Travelers passing through Santa Cruz on coastal Route 1 should consider a two-mile detour. U.C.S.C. is unique among university campuses and a wonderful place to walk. It’s built in a redwood forest, on rugged terrain, overlooking Monterey Bay. A triumph of environmentally sensitive design, the campus preserves the special character of the place. A deep forest traversed by magical footbridges alternates with sensational views across rolling meadows all the way to the mountains of Big Sur. There are many formal and informal footpaths for exploring the complex site — its deep ravines, the redwoods, oaks, bays and madrones, wide grasslands and university buildings designed by distinguished Northern California architects. The campus contains an arboretum devoted to South Pacific, southern African and Native California species. And you can visit a working farm that has been a pioneer in the development of organic gardening.”

The first major museum retrospective by the video artist Ulysses Jenkins, at the Hammer Museum in Los Angeles.

The New York Times invited teenagers to suggest words to fill in gaps in the English language.

Their entries captured the way students are navigating the coronavirus pandemic, the complexities of life online and the existential feelings caused by the various challenges their generation faces. Here are some of our favorites:

A serene, unblemished scene in nature that feels untouched by humanity. As Wendy gazed upon the tacine vistas of the Yukon, she felt an overwhelming sense of awe.

To anticipate nostalgia, as in when one feels nostalgic for something that hasn’t passed yet. My basketball season is quickly coming to an end, so I am currently noscipating about it.

A joke that has been overused and therefore is not funny to anyone who has heard it before — like this one: What do you call a fish with no eyes (i’s)? A fsh. He proceeded to tell a fsh, which nobody laughed at.

Thanks for reading. I’ll be back on Monday. Enjoy your weekend. — Soumya

Miles McKinley and Mariel Wamsley contributed to California Today. You can reach the team at CAtoday@nytimes.com.