An exchange about Breonna Taylor and George Floyd crystallizes the candidates’ opposing views on racial justice. 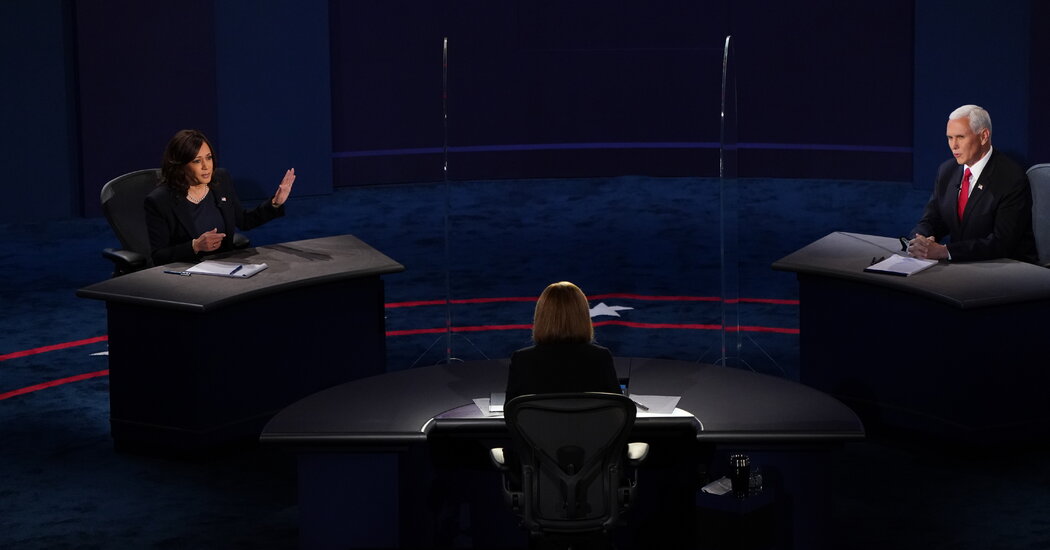 An exchange between Vice President Mike Pence and Senator Kamala Harris late in the debate crystallized the deep differences in the two sides’ approaches to racial justice.

Asked whether justice was done in the case of Breonna Taylor, whom police officers fatally shot after bursting into her home in Louisville, Ky., while she was sleeping, Ms. Harris said she did not think so. (A grand jury indicted only one of the officers, and the charges against him are not for shooting Ms. Taylor, but for endangering her neighbors.)

She then linked the killing of Ms. Taylor to the killing of other Black people by the police, like George Floyd in Minneapolis, and said that if elected, she and Joseph R. Biden Jr. would ban chokeholds, create a national registry for police officers who act illegally, close private prisons and decriminalize marijuana, among other changes to the criminal justice system.

As a former prosecutor, she said, “I know what I’m talking about.”

Mr. Pence, by contrast, claimed that it was a “great insult” to police officers to say that there was implicit racial bias in law enforcement at all. Research consistently shows that officers disproportionately stop Black people, arrest Black people, and use force — often fatal — against Black people.

Mr. Pence also suggested that it was disturbing for a former prosecutor like Ms. Harris to “assume that an impaneled grand jury looking at all the evidence got it wrong,” even though a member of the grand jury came forward publicly last month to express concerns about the proceedings, saying the jury had not been given the option to indict the other officers.

And he said that Mr. Trump had “repeatedly” condemned white supremacists, though the president declined to do so just last week, during his first debate with Mr. Biden.