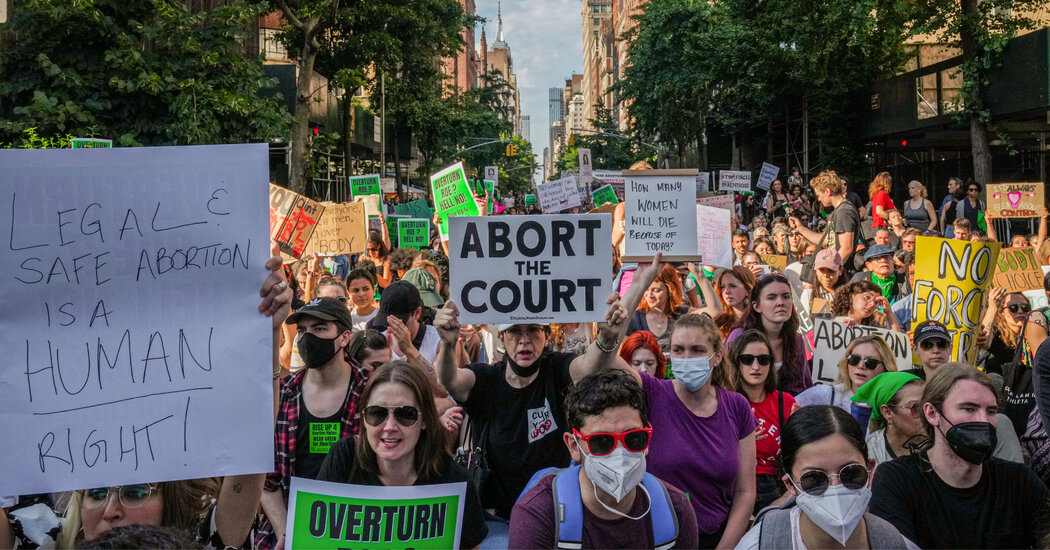 Americans awakened on Saturday to a new and rapidly shifting reality where abortion, a basic legal right for nearly a half-century, was outlawed in some states and permitted in others, and where initial bursts of elation and shock after the declaration that Roe v. Wade had been overturned gave way to action.

Demonstrations and spontaneous celebrations erupted in dozens of cities across the country. While abortion opponents cheered a long-fought victory, outraged protesters thronged by the thousands in Chicago, Dallas, New York and Louisville, Ky., condemning the Supreme Court and vowing that they would resist the decision.

Legal experts confronted a new and changing landscape of abortion laws. In the newly redrawn map of the United States that was taking shape on Saturday, abortion was banned in at least nine states, prompting vows of swift enforcement from officials in conservative states. Prosecutors in liberal states and counties responded with defiance, saying they would not violate their own values by pursuing criminal cases against doctors who had performed abortions.

But in many states, they would have little to prosecute: Across the United States, doctors immediately halted procedures and canceled scheduled weekend appointments, even as patients were sitting in waiting rooms at abortion clinics. Women scrambled to face the new legal reality, abruptly making plans to cross state lines into places where abortion was still allowed — traveling from Missouri to Illinois, from Wisconsin to Minnesota.

Americans said they were steeling themselves for a fight in the wake of the court’s decision, whether that meant pushing for still more restrictions on abortion, or working to elect politicians in the midterm elections who favor abortion rights.

“I fear for my child. I worry that she isn’t going to have choice,” said Abbye Putterman, 36, who stood outside an abortion clinic in Overland Park, Kan., on Saturday and spoke of the impact the decision could have on her 12-year-old daughter. “I feel like a whole bunch of white men are trying to decide what my daughter should do. Those men don’t know anything about what it’s like to carry a child — what pregnancy does to your body.”

Abortion is still legal in Kansas, but was banned in neighboring Missouri on Friday. In August, a ballot initiative will ask voters in Kansas to decide whether the State Constitution should continue to protect the right to an abortion.

Ms. Putterman was at the clinic to show support to the women receiving services there, while anti-abortion protesters gathered outside.

“We don’t believe in moral compromise, and we don’t want them to be guilty of murder,” said Valley Scharping, 26, who stood on the sidewalk. He held a sign that read “Love your preborn neighbor as yourself.”

On Saturday, President Biden spoke of the Roe decision. “Jill and I know how painful the devastating decision is for so many Americans,” he said, adding that the administration would focus on states’ decisions and “how they administer it and whether or not they abide by their own laws.”

In some cities, demonstrations turned into chaotic scenes. In Arizona, police officers deployed tear gas and state senators called a recess late Friday after protesters amassed outside the statehouse and banged on windows, according to senators.

A video posted on social media by Senator Michelle Ugenti-Rita, a Republican, showed at least one protester repeatedly kicking an entrance to the Capitol as others held up signs against the glass. Police officers in riot gear lined up inside the building.

Thousands of people marched throughout downtown Chicago on Friday, including Laurie Walter, a 67-year-old retired college professor, who had taken a 45-minute train ride from a suburb to join the crowd.

“It’s hard to be optimistic today, but I like to believe the arc of history bends towards justice,” she said. “I see all these young people here and I have hope for the future. I hope this galvanizes people to vote.”

More rallies were planned throughout the weekend in cities including Los Angeles, Indianapolis and Austin, Texas.

A fast-evolving patchwork of abortion laws was emerging on Saturday, as some states imposed abortion restrictions, and others tried to accelerate timelines for the bans to take place.

After the Supreme Court handed control over abortion restrictions back to the states, at least nine states that are home to roughly 40 million people quickly put bans in place. Other abortion prohibitions that had been passed in anticipation of a post-Roe legal landscape were working their way through the courts.

In Idaho, North Dakota and Texas, officials said they would wait the 30 days stipulated in their laws for their so-called trigger laws to take effect, banning abortion.

In Ohio, a law outlawing abortion after about six weeks of pregnancy took effect after a federal judge lifted an injunction that had blocked the law for the past three years. Gov. Mike DeWine reiterated his opposition to abortion on Friday, saying he believed “that the life of a human being is at stake and we have an obligation to protect that innocent life.”

In many states, residents were left to grapple with a confusing array of pronouncements as local and state officials clashed over the legalities of abortion restrictions and how they would be enforced.

In Tennessee, Herbert Slatery, the attorney general, filed an emergency motion on Friday asking a court to lift an injunction and allow a ban on abortions after six weeks to be made law.

“After nearly 50 years, today’s decision gives the people of Tennessee a say on what the Court called ‘a profound moral issue,’” he said in a statement.

But Glenn Funk, the district attorney in Nashville, said in a statement that he would not prosecute doctors performing abortions or women who choose such a procedure.

“I will use my constitutional powers to protect women, health providers and those making personal health decisions,” he said.

Officials of Mississippi’s only abortion clinic, which was the center of the case decided on Friday by the Supreme Court, predicted that conservative activists would soon seek limits to rights related to birth control and same-sex marriage.

Diane Derzis, who owns the clinic, the Jackson Women’s Health Organization, said it would most likely remain open for the next 10 days before shutting its doors when a new law is expected to take effect in that state.

Several states, including Wisconsin, saw 19th-century abortion bans that had long been dormant immediately become enforceable. Gov. Gretchen Whitmer of Michigan warned residents that a law passed in 1931 that criminalized abortion, without making exceptions for rape or incest, had been temporarily paused by a judge in May but could be put into effect at any time.

“The 1931 law would punish women and strip away their right to make decisions about their own bodies,” Ms. Whitmer, a Democrat, said in a statement.

Governors in California, Oregon and Washington issued a joint “commitment to reproductive freedom,” saying they would welcome people who sought abortions in their states and push back on efforts by other state governments to prosecute people who did so.

Gov. J.B. Pritzker of Illinois, a Democrat, called for a special session for lawmakers to strengthen abortion rights, anticipating that women from other states would be flocking to Illinois for abortion services.

At a Planned Parenthood clinic in Waukegan, Ill., just miles from the Wisconsin border, a group of about 20 anti-abortion protesters stood with signs and prayed on Saturday.

The clinic was opened in 2020 in anticipation that Roe would be overturned and Wisconsin would ban abortions, said Mary Jane Maharry, a spokeswoman for Planned Parenthood of Illinois. “We do have enough staff to meet the needs today and we are working at increasing our staff to meet the anticipated surge of 20,000 to 30,000 additional out-of-state patients per year,” she said.

The Supreme Court’s decision rippled throughout the globe, prompting condemnation in France, where government leaders said on Saturday that they would support a bill enshrining the right to abortion in the country’s Constitution.

Aurore Bergé, a top lawmaker for President Emmanuel Macron’s party in the lower house of Parliament, told France Inter radio on Saturday that the Supreme Court’s decision was “catastrophic for women around the world” and that lawmakers should move to prevent any future “reversals” on the issue.