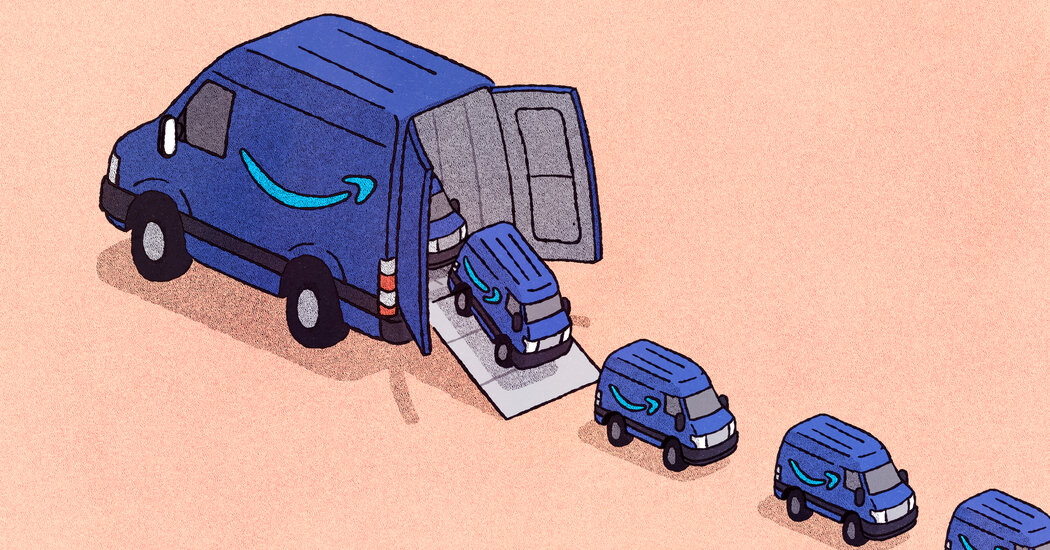 Nearly seven years ago, Amazon’s Jeff Bezos predicted a major leap forward for his company: drone deliveries of lipstick and books to your door. That attention-grabbing technology has barely gotten off the ground and might never be widespread.

But over that same time period, Amazon did something else that has transformed home delivery without as much buzz. It effectively built from scratch its own network of package centers, trucks and delivery vans that now handle a majority of Amazon customer orders that used to be dropped off by the Postal Service, UPS or other parcel companies.

While we were eager for innovation from the skies, Amazon delivered something just as innovative with nuts and bolts.

The divergence between the imagined and the real Amazon delivery transformation shows that we are terrible at predicting what will become innovative revolutions. And, as I have said in this newsletter before, it proves that banal stuff can be the biggest marvels.

So what happened? Bezos said in the 2013 interview that it would take four or five years to have those drone deliveries. It turns out that using remote-controlled aerial gizmos to drop stuff at our homes is incredibly difficult, prone to risk and potentially more trouble than it’s worth.

Like driverless cars, drone technology in populated areas is more complicated than most people expected, and it has been — mostly for good reason — tightly controlled in the United States by government agencies worried about drones straying into the path of airplanes, dropping out of the sky onto our heads or unwittingly spying through people’s windows. It wasn’t until this week that the F.A.A. gave Amazon permission to do drone deliveries.

And drones might never be practical for deliveries when someone in a vehicle could do the same thing in a fraction of the time and cost. Drones are a great public relations jolt for Amazon, but let’s not put too much stock in them for awhile — maybe ever.

What Amazon did instead was build its own delivery network, essentially creating something not far off the 113-year-old UPS in well under a decade. It was a remarkable remaking of Amazon, and in my mind it’s the biggest, least flashy change in e-commerce in years.

Amazon did this by spending tons of money. It expanded from a handful of merchandise warehouse clusters to increasingly specialized distribution centers in nearly every state. It enlisted an army of contractors to drive delivery vans for the company, and helped fund some of the delivery companies. Amazon bought its own airplanes, and in some places the company’s parcel flights are now responsible for a big chunk of traffic in the skies.

Most of this is way too dull to make a good YouTube video.

I don’t want to exaggerate Amazon’s delivery operation. The company still needs the Postal Service and other delivery partners. But arguably without this D.I.Y. delivery operation, it would have been harder for Amazon to speed up delivery times and keep pace with people’s growing desire to shop from their sofas.

It’s debatable whether we want Amazon warehouses in more of our neighborhoods, couriers pressed to meet tough delivery demands and armies of contract workers that can be ditched on a whim. By comparison, drones seem like a less messy alternative to Amazon’s human army of overworked contractors.

That’s the reality of technological changes. The fanciful stuff that we imagine will be pure and clean may never come to pass. And the biggest innovations are duller and potentially messier.

Look, it’s unnerving that a group backed by Russia’s government tricked Americans into writing for a website intended to divide left-wing voters.

The silver lining is that this episode shows that the U.S. government and big social media companies seem to have learned from mistakes they made around the 2016 U.S. presidential election.

This time, U.S. intelligence agencies spotted what seemed like a foreign influence operation online, my colleagues Sheera Frenkel and Julian E. Barnes reported. The F.B.I. tipped off Facebook. And Facebook collaborated with Twitter and other companies to sleuth out where the Russian group was setting up online to take it down before it got a big audience.

This is exactly how we want law enforcement and social media companies to act. They were proactive and collaborative and stopped this Russian meddling campaign relatively early. That didn’t happen four years ago.

There remain dark and difficult threats online, including misleading political and health misinformation originating from Americans and spread by powerful people, including President Trump. We don’t need Russians to divide us; we’re doing it to ourselves.

But I’m going to take comfort in the fact that these trolls were spotted because tech companies and law enforcement did the right things.

All of these sea lions are adorable AND EXTREMELY LOUD at barking.

The explosive problem of ‘zombie’ batteries