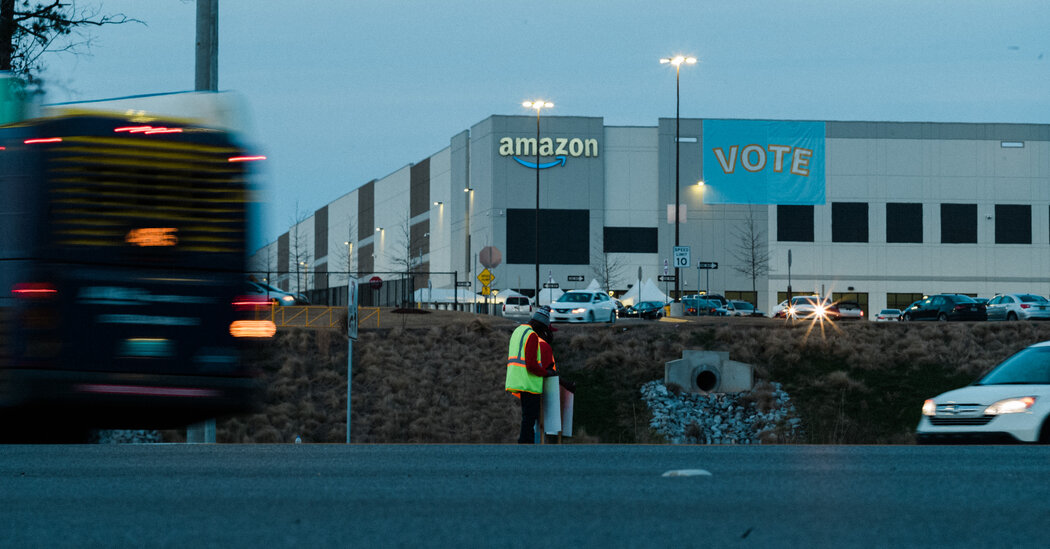 Union supporters are narrowly trailing opponents in a union election at an Amazon warehouse in Alabama, the National Labor Relations Board said on Thursday. But the count was far closer than a vote at the same warehouse last year, when workers rejected the union by a more than 2-to-1 ratio.

The union had 875 yes votes versus 993 no votes, but the more than 400 challenged ballots are sufficient to potentially affect the outcome. The challenges will be resolved at a labor board hearing in the coming weeks.

Overall, roughly 2,300 ballots were cast in the election in Bessemer, Ala., out of more than 6,100 eligible employees.

The labor board mandated the revote, which was conducted by mail from early February to late March, after concluding that Amazon violated the so-called laboratory conditions that are supposed to prevail during a union election.

“Regardless of the final outcome, workers here have shown what is possible,” said Stuart Appelbaum, president of the Retail, Wholesale and Department Store Union, which sought to organize the workers. “They have helped ignite a movement.”

Speaking in a videoconference with reporters after the vote count, Mr. Appelbaum said the organizing in Bessemer had helped spark union campaigns at other companies, like REI and Starbucks, and in other parts of the country.

Amazon did not respond to a request for comment.

The labor board is also counting votes in another high-profile election, at an Amazon warehouse on Staten Island. At the end of the first day of counting on Thursday, 57 percent of the ballots supported being represented by Amazon Labor Union, and 43 percent were opposed. The N.L.R.B. said the count should be finished Friday.

Workers who supported the union in Bessemer cited frustrations over low pay, inadequate breaks and overly aggressive productivity targets. Amazon has said its pay — just under $16 per hour for full-time, entry-level workers — is competitive for the area. It has also pointed to a benefits package that it says is attractive, including complete health care benefits for full-time employees as soon as they join the company. The company has said its performance targets reflect safety considerations and individual employees’ experience.

Several employees who backed the union said co-workers were generally less afraid to question management or show their union support this year than during last year’s election. “People are asking more questions,” Jennifer Bates, an employee who helped lead the organizing effort both last year and this year, said in an interview this month. “More employees are standing up and speaking out.”

The union also cited key differences in its approach to the more recent election. Last year, the union curtailed in-person organizing efforts because of Covid-19 safety concerns, but this time its organizers visited workers at home. Other unions dispatched organizers to Alabama to aid in these efforts.

Workers also appeared to be more active in organizing within the plant. They wore union T-shirts to work twice each week to demonstrate support, and one group delivered a petition to managers with more than 100 signatures complaining of inadequate breaks and break room equipment.

Still, Amazon retained advantages, not least of which was its high rate of employee turnover, which made it difficult for organizers to sustain momentum as disaffected workers simply left their jobs.

The company also appeared to spend generously on its effort to dissuade employees from backing the union, hiring consultants and holding more than 20 anti-union meetings with employees per day before mail ballots went out in early February. In a Labor Department filing released on Thursday, Amazon disclosed that it had spent more than $4 million on labor consultants last year. It has yet to reveal how much it spent on consultants this year.

Union supporters accused Amazon of excluding them from meetings to mute criticism and pushback, but Amazon denied the accusation.

The tally announced on Thursday was consistent with a broader trend in rerun elections, more than half of which unions have lost since 2010.