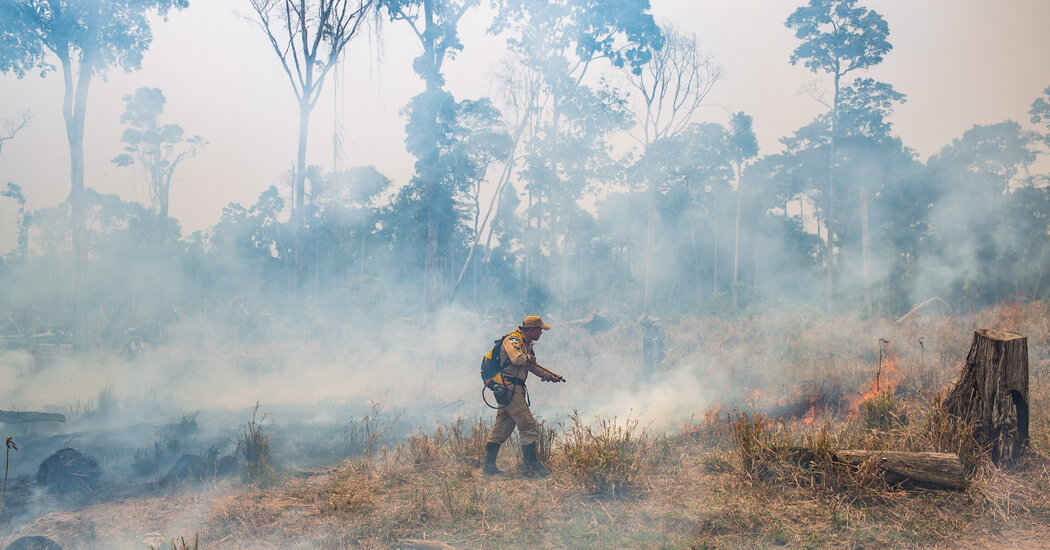 The Amazon is losing its ability to recover from disturbances like droughts and land-use changes, scientists reported Monday, adding to concern that the rainforest is approaching a critical threshold beyond which much of it will be replaced by grassland, with vast consequences for biodiversity and climate change.

The scientists said their research did not pinpoint when this threshold, which they described as a tipping point, might be reached.

“But it’s worth reminding ourselves that if it gets to that tipping point, that we commit to losing the Amazon rainforest, then we get a significant feedback to global climate change,” said one of the scientists, Tim Lenton, director of the Global Systems Institute at the University of Exeter in England.

Losing the rainforest could result in up to 90 billion tons of heat-trapping carbon dioxide getting put back into the atmosphere, he said, equivalent to several years of global emissions. That would make limiting global warming more difficult.

Among previous studies there has been a large degree of uncertainty as to when such a threshold might be reached. But some research has concluded that deforestation, drying and other factors could lead to substantial forest dieback in the Amazon by the end of this century.

Carlos Nobre, a senior scientist at the National Institute of Amazonian Research in Brazil and one of the first to sound alarm over the potential loss of the Amazon more than three decades ago, described the new study as “very compelling.”

“It raised my level of anxiety,” said Dr. Nobre, who was not involved in the research.

Covering more than two million square miles in Brazil and neighboring countries, the Amazon is the world’s largest rainforest, and serves a crucial role in mitigating climate change in most years by taking in more carbon dioxide from the atmosphere than it releases. In its diversity of plant and animal species, it is as rich as or richer than anywhere else on the planet. And it pumps so much moisture into the atmosphere that it can affect weather beyond South America.

But climate change, together with widespread deforestation and burning for agriculture and ranching, has taken a toll on the Amazon, making it warmer and drier. The region, one of the wettest on Earth, has experienced three droughts since 2000.

Most previous studies of resiliency in the Amazon relied on models, or simulations, of how forest health might change over time. In the new research, the scientists used actual observations: decades of remote sensing data from satellites that measure the amount of biomass in specific areas, which corresponds to their health. Looking only at pristine parts of the rainforest, the researchers found that overall since 2000 these areas lost resilience. For example, it took increasingly longer for forested areas to regain their health after suffering in a drought.

“That lack of resilience shows that, indeed, there is only so much of a beating that this forest can take,” said Paulo Brando, a tropical ecologist at the University of California, Irvine who was not involved in the study. “It’s reducing the ability to bounce back.”

But Dr. Brando said this was not necessarily a sign that a tipping point was unavoidable, and pointed to the need to stop clear-cutting and forest degradation in the region. “These systems are highly resilient, and the fact that we have reduced resilience doesn’t mean that it has lost all its resilience,” he said. “If you leave them alone for a little bit, they come back super strongly.”

The researchers found that more than three-quarters of the untouched rainforest lost resiliency over that time, and that the loss was greatest in areas that were drier or closer to human activities like logging. The study was published in the journal Nature Climate Change.

Chris Boulton, a researcher at the University of Exeter and the study’s lead author, said that the Amazon was like a giant water recycling network, as moisture from evaporation and transpiration from trees is blown by winds. So the loss of some of the forest, and some of the moisture, leads to more drying elsewhere.

“You can imagine that as the Amazon dries you start to see that resilience being lost even faster and faster,” Dr. Boulton said. Forests might then decline and die off relatively quickly and become more like a savanna, with grasses and far fewer trees.

Not only would the loss of forest trees add the carbon stored in their tissues back into the atmosphere, savannas would also take up far less carbon than the large, broad-leafed trees they replaced. Savanna habitat would also support far fewer species.

Dr. Nobre said the research shows that the Amazon “is on the edge of this cliff, this switch to a different ecosystem.” And if it were to happen, he added, “that would be the new ecosystem for hundreds of years, perhaps thousands of years.”

About 17 percent of the Amazon has been deforested over the past half-century, and while the pace of deforestation slowed for some years in Brazil, it has picked up again more recently. The researchers said their work showed that efforts to stop deforestation would not just protect specific areas but have an effect on the resiliency of the Amazon as a whole.

“They are absolutely correct,” Dr. Nobre said. “We have to get to zero deforestation, zero forest degradation,” adding, “We still have a chance to save the forest.”