All the times the US spent big on infrastructure 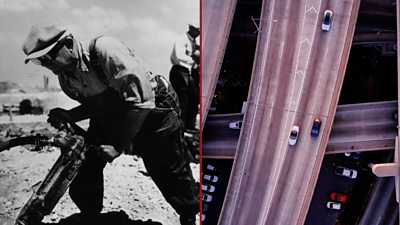 The US federal government played a key role in developing infrastructure over the course of the 20th Century, from the public works project of the 1930s to the building of the highways in the 1950s.

Now, Joe Biden hopes to build on that legacy with a $2tn (£1.4tn) plan that would mark the largest federal investment in infrastructure “in a generation”. Where does it rank among the largest projects in American history?

The president’s plan has received criticism from Republicans for defining infrastructure too widely. Only about 6% of the spending would go directly towards roads and bridges. The bill makes significant investments in home-care services, job-training, expansion of broadband access, electric vehicle incentives and R&D.