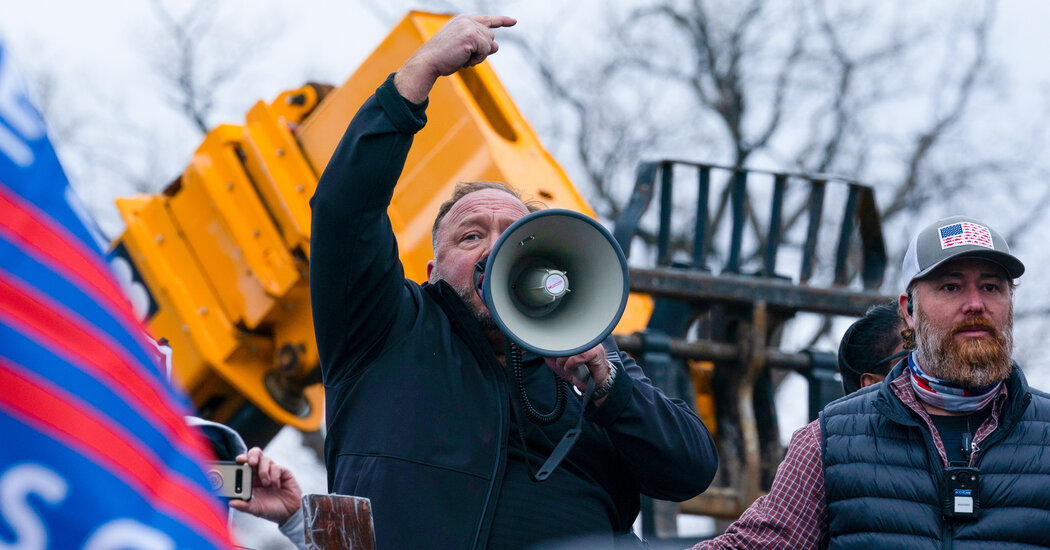 For Jan. 6, Mr. Jones helped secure at least $650,000 from a Publix grocery-store heiress, Julie Fancelli, an Infowars fan, to underwrite Mr. Trump’s rally on the Ellipse the morning of the attack, $200,000 of which was deposited into one of Mr. Jones’s business accounts, the House committee investigating the Jan. 6 attack said. The night before the riot Mr. Jones was at the Willard Intercontinental Hotel in Washington, where Trump aides and allies had set up an outpost. He has longtime ties to at least a half-dozen people arrested after the riot, including the founder of the far-right Oath Keepers militia, Stewart Rhodes, still a regular guest on Infowars, and Joseph Biggs, a former Infowars employee and Proud Boys leader.

The House committee has subpoenaed Mr. Jones, and included a three-page list seeking his related communications and financial records. The panel is also seeking Mr. Jones’s communications with Mr. Trump, his family and anyone from the White House or Congress in the days before the riot. Questioned by the panel this year, Mr. Jones invoked his Fifth Amendment right against self-incrimination more than 100 times, and is trying to block the committee’s demand for records in court.

Whatever the outcome of the Jan. 6 investigation, Mr. Jones’s journey from Sandy Hook to the assault on the Capitol is a reflection of how conspiracy theories in the United States have metastasized and corroded public discourse in the digital age. A defender of President Vladimir V. Putin of Russia and a former regular on RT, the Kremlin-funded international television outlet, Mr. Jones espoused such extreme views of American democratic society — he has cast airport security screenings as a plot to usurp Americans’ freedoms — that in 2011 RT stopped inviting him on air.

But after Mr. Trump appeared live in an interview on Infowars’ website in December 2015, Mr. Jones traveled from the fringes to become part of a newly radicalized Republican Party. Infowars grossed more than $50 million annually during the Trump presidency by selling diet supplements, body armor and other products on its website, records filed in court indicate. During and after the Jan. 6 riot, Infowars promoted its merchandise alongside graphic videos, including footage by an Infowars cameraman of the shooting death of a pro-Trump rioter, Ashli Babbitt, by a Capitol Police officer during the attack.

Mr. Jones did not respond to messages seeking comment. His lawyer, Norm Pattis, said his client had done nothing wrong on Jan. 6.