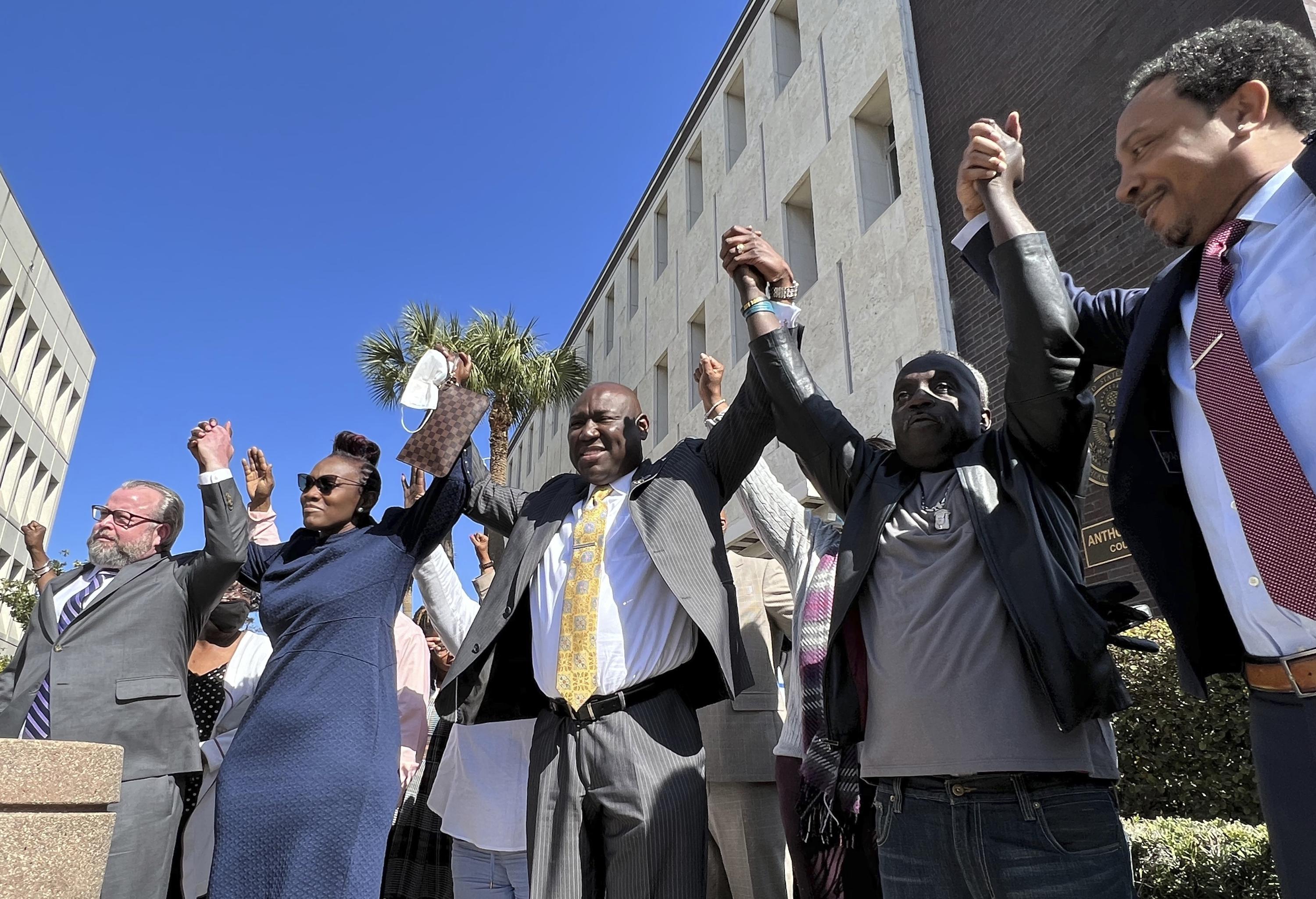 BRUNSWICK, Ga. (AP) — The three white men convicted of murder in Ahmaud Arbery’s shooting were found guilty of federal hate crimes Tuesday in a verdict that affirmed what family members and civil rights activists said all along: that he was chased down and killed because he was Black.

The verdict — handed down one day before the second anniversary of Arbery’s death on Feb. 23, 2020 — was symbolic, coming just months after all three defendants were convicted of murder in a Georgia state court and sentenced to life in prison.

But family and community members viewed the hate crimes trial as an important statement. The case also became part of a larger national reckoning on racial injustice after graphic video of Arbery’s killing leaked online.

“Ahmaud will continue to rest in peace. But he will now begin to rest in power,” Arbery’s mother, Wanda Cooper-Jones, told reporters outside the courthouse.

Arbery’s father, Marcus Arbery Sr., bowed his head and shook his fists in quiet celebration as the guilty verdicts were read in the courtroom. He then pressed his hands together in front of his face as if saying a silent prayer.

Arbery Sr. and Cooper-Jones emerged from the courthouse holding hands with their attorney Ben Crump, then raised their clasped hands to cheers from supporters.

But Cooper-Jones did not describe the outcome as a victory.

“We as a family will never get victory because Ahmaud is gone forever,” she said.

Arbery Sr. noted that his son used to call every day, even if just to tell his family that he loved them.

“Ahmaud was a kid you can’t replace, because of the heart he had,” he said. “I’m struggling with that every day,” he said. “It hurts me every day.”

Defendants Greg and Travis McMichael sat stoically at the defense table as the guilty verdicts were read. When called one-at-a-time before the judge to discuss next steps in their cases, the father and son answered with hushed voices.

The McMichaels and their neighbor, William “Roddie” Bryan, were also found guilty of attempted kidnapping, and the McMichaels were also convicted of the use of a firearm in the commission of a violent crime.

The trial has been taking place simultaneously with that of three former Minneapolis police officers who have been charged with violating the civil rights of George Floyd. Floyd, a Black man, died on May 25, 2020, when then-officer Derek Chauvin pinned him to the ground and pressed a knee to his neck for what authorities say was 9 1/2 minutes. Attorneys began delivering their closing arguments in that case on Tuesday.

Weeks prior to the hate crimes trial in the Arbery killing, the McMichaels had both agreed to enter guilty pleas to the hate crimes in exchange for being able to serve their sentences in federal, rather than state prison. Judge Lisa Godbey Wood rejected the deal, however, saying it would tie her hands at sentencing, and after Arbery’s family vehemently opposed it.

“What we got today, we wouldn’t have gotten if it wasn’t for the fight by the family for Ahmaud,” Cooper-Jones said Tuesday, reiterating her anger at Justice Department prosecutors, who she said “chose to ignore the family’s cry.”

The facts of the case were not disputed during the hate crimes trial. The McMichaels grabbed guns and jumped in a pickup truck to pursue Arbery after seeing him running in their neighborhood outside the Georgia port city of Brunswick. Bryan joined the pursuit in his own pickup and recorded the cellphone video that later leaked online.

To back the hate crime charges, prosecutors showed roughly two dozen text messages and social media posts in which Travis McMichael and Bryan used racist slurs and made derogatory comments about Black people. The FBI wasn’t able to access Greg McMichael’s phone because it was encrypted.

In 2018, Travis McMichael commented on a Facebook video of a Black man playing a prank on a white person: “I’d kill that f—-ing n—-r.”

A woman who served under Travis McMichael in the U.S. Coast Guard a decade ago said he called her “n——r lover,” after learning she’d dated a Black man. Another woman testified Greg McMichael had ranted angrily in 2015 when she remarked on the death of civil rights activist Julian Bond, saying, “All those Blacks are nothing but trouble.”

Crump remarked after the verdict that “for many of us, there was never any doubt that Greg McMichael, Travis McMichael, and William Bryan targeted Ahmaud because of his skin color.”

“But because of indisputable video evidence, disgusting messages sent by the defendants, and witness testimony, their hate was revealed to the world and the jury,” he said. “We hope and demand that the severity of their crimes are reflected in the sentencing, as well.”

U.S. Attorney General Merrick Garland said the verdict “makes clear that the Justice Department will continue to use every resource at its disposal to confront unlawful acts of hate and to hold accountable those who perpetrate them.”

Garland added that Arbery’s family and his friends “should be preparing to celebrate his 28th birthday, later this spring, not mourning the second anniversary of his death tomorrow.”

“Ahmaud Arbery should be alive today,” he said.

Defense attorneys contended the McMichaels and Bryan didn’t chase and kill Arbery because of his race but acted on the earnest, though erroneous, suspicion that Arbery had committed crimes in their neighborhood.

The attorneys for the McMichaels, Amy Lee Copeland and A.J. Balbo, declined to comment on the verdict. Bryan’s attorney, Pete Theodocion, did not immediately respond to an email seeking comment.

The jury of eight white people, three Black people and one Hispanic person received the case Monday. The jurors adjourned for the night after about three hours of deliberations, and then deliberated for about an hour Tuesday morning before announcing they had reached a verdict.