After Mounting a Comeback, Eagles Face a New Threat 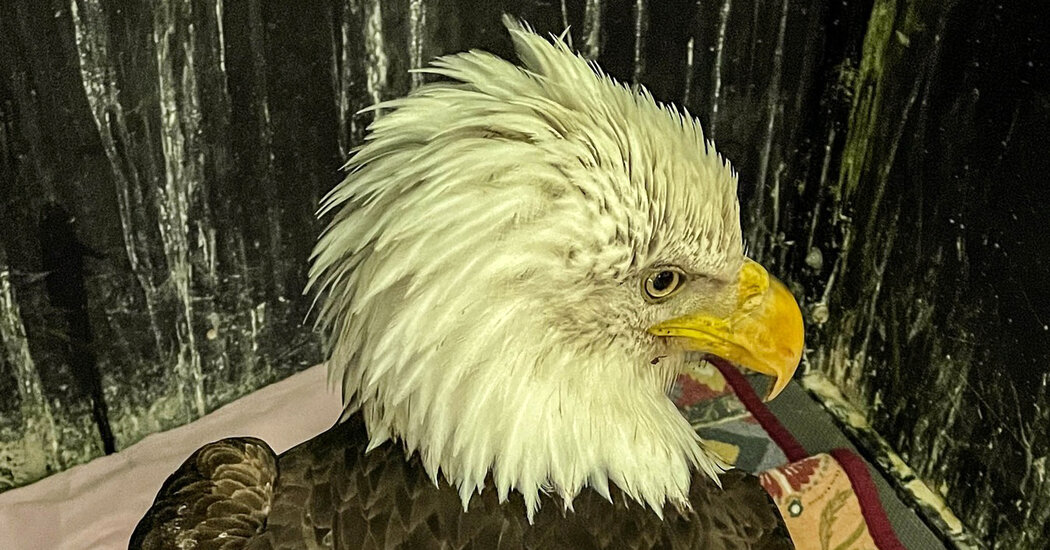 The bald eagle, whose resurgence is considered one of the great conservation success stories of the 21st century, is facing a serious threat: lead poisoning.

Researchers who tested the feathers, bones, livers and blood of 1,200 bald eagles and golden eagles, another bird of prey in the Northern Hemisphere, found that nearly half of them had been exposed repeatedly to lead, which can lead to death and slow population growth.

Scientists believe that the primary source of the lead is spent ammunition from hunters who shoot animals that eagles then scavenge, usually during the winter, according to the study, which was published on Thursday in the journal Science.

Nearly a third of the birds tested also showed signs of acute poisoning, or short-term exposure to lead, according to the study, which was led by scientists from the United States Geological Survey, Conservation Science Global, Inc. and the U.S. Fish and Wildlife Service.

The effects of lead poisoning are devastating, said Vincent A. Slabe, the lead author of the study and a research wildlife biologist for Conservation Science Global in Montana.

Lead poisoning can prevent an eagle from digesting food properly, eventually leading to starvation, he said. It can cause loss of locomotion so severe that an eagle will lose the ability not only to fly, but also to move at all, he said.

The study, which examined bald eagles and golden eagles from 38 states, is the first to look at the effects of lead poisoning on the bird populations on such a large scale, said Todd E. Katzner, a research wildlife biologist at the U.S. Geological Survey.

The research also showed that poisoning slowed down population growth rates by about 4 percent for bald eagles and 1 percent for golden eagles, which number about 35,000. The population of bald eagles is now above 300,000, according to researchers.

“These percentages seem small, but, over time, thousands and thousands of individual birds are being removed from the population” because of lead poisoning, Dr. Katzner said.

Bald eagles decades ago had been killed off largely by the widespread use of the synthetic insecticide DDT. A ban on DDT in 1972 and conservation efforts helped the population to rebound, with the bald eagle being removed from Endangered Species Act protection in 2007.

Dr. Slabe said he hoped the report’s findings would help to educate hunters and encourage more of them to switch to lead-free ammunition.

“This is 100 percent human caused and totally preventable,” said Laura Hale, president of the Badger Run Wildlife Rehab in Klamath Falls, Ore., whose organization has taken in bald eagles, golden eagles, and different species of hawks that were poisoned by lead.

In 2018, the group tried to save an eagle that a hunter had found in the woods and was unable to fly and gasping for air. When Ms. Hale told the hunter that the eagle most likely became sick from feeding on contaminated gut piles — the remains left behind after a hunter strips the animal’s carcass of its meat — she said that he was stricken.

“He was horrified,” Ms. Hale recalled. “He wanted to stop hunting.”

Ms. Hale said she told him that he did not have to stop hunting; he needed only to stop using lead ammunition.

Many hunters, concerned about effects not only on wildlife, but also on game meat consumed by humans, have been moving away from lead ammunition and have begun using copper bullets.

Sporting Lead-Free, a hunters and anglers group based in Wyoming that seeks to raise awareness about the adverse effects of lead ammunition, posted a short film with testimonials from hunters who stopped using it.

“Hunters are conservationists,” said Bryan Bedrosian, a co-founder of Sporting Lead-Free and a raptor biologist. “This does not need to be a polarizing issue.”

Some hunters hesitate to switch ammunition because of tradition, a mistaken belief that copper bullets are less effective, or because they have a backlog of lead bullets, he said.

“Then there are still folks who just don’t know,” said Mr. Bedrosian, who says he uses lead bullets at the range, where he knows the ammunition will not come into contact with wildlife.

Hannah Leonard, the group’s outreach coordinator, said she hunted with lead bullets until four years ago, when she came upon an emaciated golden eagle hobbling on the ground while she was hunting in Anaconda, Mont.

“Her talons were really clenched, her wings were drooped,” Ms. Leonard said. “You could tell she was in danger.”

The eagle later died and Ms. Leonard said the animal rescue group she called to try and save the bird told her the cause of death was lead poisoning.

“It was a no-brainer for me to switch” types of ammunition, she said.

In January 2017, the U.S. Fish and Wildlife Service issued a policy to phase out the use of lead ammunition and fishing tackle used on national wildlife refuges, one of the last acts by the Obama administration. The Trump administration reversed the decision less than two months later.

On Friday, the service declined to say whether that policy would be reinstated as a result of the new study.

There has been a nationwide ban on the use of lead shot for hunting waterfowl since 1991, according to the service.

California prohibits the use of lead ammunition statewide, including on federal land, largely to prevent adverse impacts of lead on the California condor, which is endangered.

“The U.S. Fish and Wildlife Service uses the best available scientific data to conserve wildlife populations and evaluate compatible uses on the lands that we manage, as well as under applicable local, state and federal laws,” Vanessa Kauffman, a spokeswoman for the agency, said on Friday.

Dr. Slabe said that hunters, once they were educated, would voluntarily stop using lead ammunition.

“Hunters are very receptive to this issue,” he said. “Hunters are the solution to this problem.”