After Mass Shooting, a Town in Arkansas Struggles to Move Forward 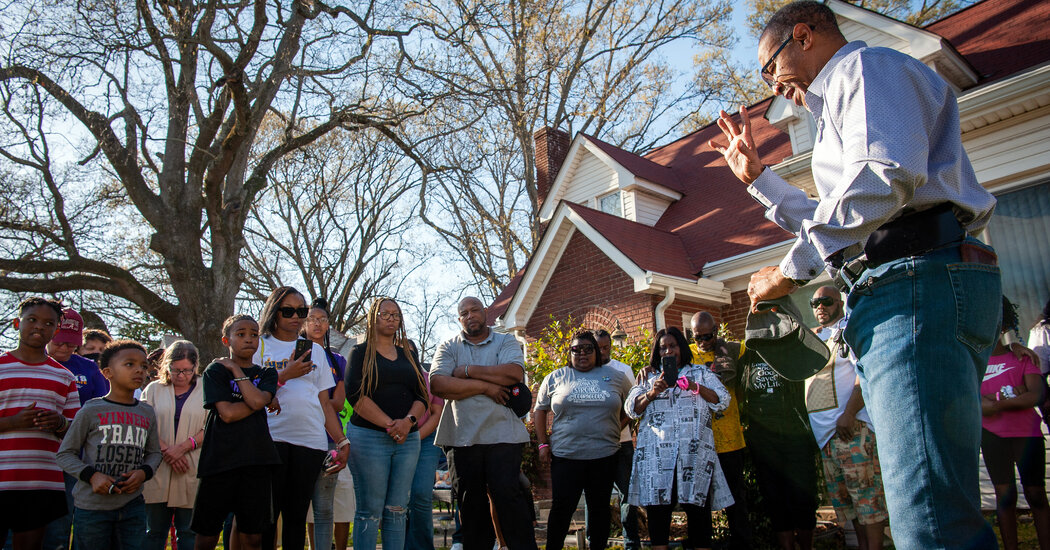 DUMAS, Ark. — The small city of empty storefronts and vacant lots that is Dumas, Ark., has seen its population drain away steadily over the decades. But each spring, people of the diaspora have made their way along two-lane country roads, driving through cotton fields and catfish farms and finally into Dumas for Hood-Nic, the community’s big “neighborhood picnic,” which serves as an informal homecoming.

It is typically a low-key day full of preachers, rappers, raffles, food trucks and a contest for custom-car owners. The event raises money for scholarships and promotes nonviolence. But this year, organizer Sylvester Spinks Jr. said, something “allowed the devil to slide in.”

An evening eruption of gunfire in a crowd of roughly 1,500 people at the Hood-Nic festival on March 19 resulted in the largest mass shooting in the United States this year, leaving a 23-year-old man dead and 26 other people wounded, including five children. Last week, authorities arrested Brandon D. Knight, 22, a North Little Rock man who, according to a police affidavit, admitted to firing a handgun at a man who he said had robbed and shot an acquaintance that day.

The police found 17 spent shell casings that they said were compatible with a .40 caliber Glock handgun belonging to to Mr. Knight. But Arkansas state police have not fully explained what happened, and said their investigation was ongoing.

In the days that followed, bandaged victims trickled home from hospitals, and the parking lot of the shuttered discount store where the event was held was cleaned of bloodstains. Dumas, a city of 4,000 people 90 miles southeast of Little Rock, seemed united in anger and grief: Nearly everyone in town seemed to have some connection to the families of the wounded.

And there was grave concern that another victim of gun violence could be Hood-Nic itself, a grass-roots event that has united scattered friends and family for years and served as a bright spot in a place of grinding poverty and diminished opportunities.

“It got bigger and bigger every year,” Curtis Allen, 68, a retired trucker, said of Hood-Nic. But after the shooting, Mr. Allen said, “I know a lot of folks are going to say they aren’t going to go to another one of those things.”

The solutions proposed for Hood-Nic, and for Dumas, reflect the priorities and anxieties of a nation that is reeling from what recent data suggests is a 30 percent rise in murders since 2019. Some residents wondered if metal detectors and surveillance cameras would help. The Rev. Arthur L. Hunt Jr., a local activist, said the underlying social problems could be ameliorated by his pet project — a proposed multimillion-dollar arts and technology college.

Guns and Gun Control in the U.S.

Flora J. Simon, the mayor of Dumas, said she was not sure if anything could be done to prevent another shootout. “If two people want to fight, I don’t care how many people, how many teachers you’ve got on duty on the playground,” said Ms. Simon, a retired high school science teacher. “They can be sitting there having a nice conversation, all of a sudden they jump up — and they fight.”

Arkansas has some of the most permissive gun laws in the United States and is struggling with an increase in gun violence. The national gun-control group Everytown for Gun Safety notes that the rate of gun deaths increased by 40 percent in the state in the last decade, compared to 33 percent nationwide.

The recent political climate has favored loosening gun restrictions even further. Last year, the Republican-controlled State Legislature passed a law that allows residents to carry concealed weapons without a permit. Mr. Knight told the police he had kept his handgun in his waistband. He was arrested on suspicion of battery and aggravated assault, but has not been accused of violating any weapons possession laws.

The Hood-Nic festival began in 2004, an attempt to build something positive in a community that was already shrinking dramatically, as farms grew increasingly mechanized and companies moved overseas. Mr. Spinks and a group of friends built on an existing front-yard barbecue and added rap performances and other attractions.

“At that time, there was a lot of crime going on,” said Jesse Webb, an organizer who was living in Ohio at the time. “And you’ve got to realize, this is a very small place. Anytime we would call home, something bad had happened. Somebody got killed. Somebody was robbing a bank. It was just all kind of crazy stuff.”

The challenges facing Dumas, the largest city in Desha County, are common in the flat, fertile Arkansas Delta region. The county population plummeted from roughly 20,000 people in 1980 to about 11,400 in 2020, according to census figures. Poverty stands at 22.8 percent — twice the national average. Dumas once boasted two new car dealerships and a Walmart, but all are gone now. The Walmart was replaced by an outpost of a regional discount chain, Fred’s, which declared bankruptcy in 2019. Its broad expanse of empty asphalt served as a convenient setting for this year’s Hood-Nic.

The legacy of segregation in the majority-Black city remains palpable. In Dumas, train tracks separate what are still considered Black and white sides of town, although those distinctions have blurred over the years. Mayor Simon is the first African American elected to the job. Hood-Nic has been notable as a popular community event started by Black organizers.

This year, an added sense of anticipation preceded Hood-Nic; the event had been canceled the two previous years because of the pandemic. Cars jammed U.S. Highway 65 on either side of the dollar-store parking lot. Chris Jones, a Democratic candidate for governor, showed up around noon to campaign. He set up a booth, registering voters among the custom cars and farmers on horseback.

Mr. Jones left before the shooting began. But Mr. Webb was onstage. “It looked like fireworks,” he said. “I saw light flashing on the ground. I was in disbelief, like, who would set some firecrackers in the crowd? From there it was just a melee. It was just disgusting.”

The Rev. Roscoe Joyner, 73, was in a McDonald’s with a view of the crowd when the shooting started. His 10-year-old grandson was out there somewhere. Rev. Joyner went running outside, terrified. “There was a crowd of people, they stampeded toward me. I had to push through.”

He came across children who were bleeding. One, a girl who seemed to be younger than 10, had been shot in the leg and was hopping. A little boy was being carried in someone’s arms. He saw the man who was killed, Cameron Shaffer, 23, lying motionless on the pavement.

Moments later he found his grandson, who was paralyzed with fear. A stranger had pushed the boy behind a car to shield him. Soon, Rev. Joyner said, another round of gunfire rang out.

According to the affidavit, Mr. Knight, the accused gunman, told the police he was shot in the chest and the arm by the man who had tried to rob his friend. He was hospitalized, and arrested upon release. Another injured person had identified him while he was on a gurney.

Mr. Knight also told the police he did not know how many times he fired after pulling his handgun from his waistband. He told them it had all happened so fast that his adrenaline was pumping.

“I know there was a lot of kids out there,” he told them, according to the affidavit. When he saw the young people in the hospital, he said, “it hurt.”

Mr. Jones, the candidate for governor, came to town Friday and spoke at a sparsely attended news conference, noting that he was one of many responsible Arkansas gun owners. “It’s time for a balanced conversation on gun violence,” he said. Later, he told a reporter that the conversation should include revisiting “open-carry” and other Arkansas gun laws.

Mr. Webb and Mr. Spinks, the Hood-Nic co-founders, said it was too early to say what would become of their festival. Their focus for now, they said, was on raising funds for victims.

“This has always been about the kids,” Mr. Webb said, “and a lot of the kids are still traumatized.”