After Another Week of Setbacks, Trump Looks to Change the Story Line 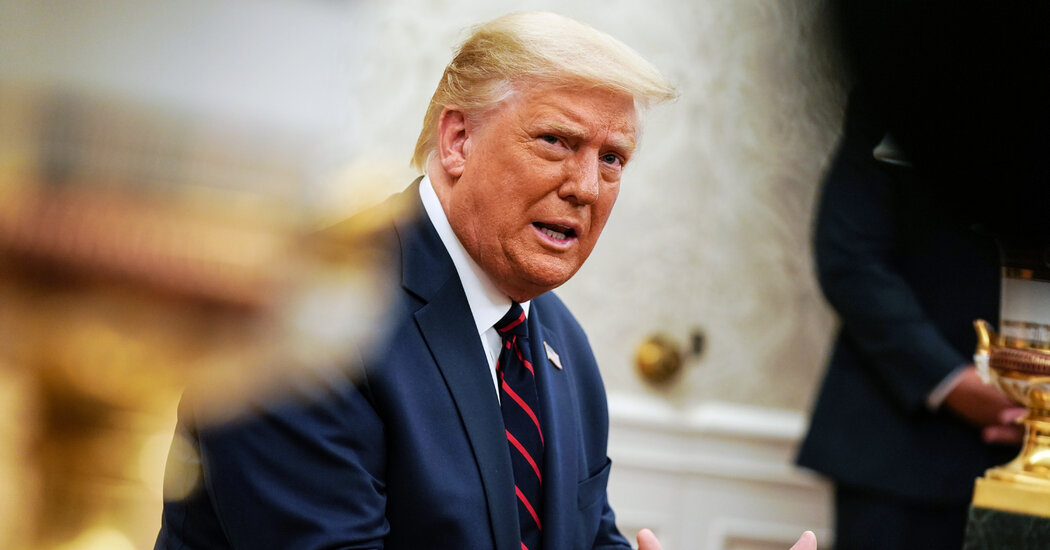 WASHINGTON — When President Trump’s strategists mapped out their plans for the critical week leading to the Republican National Convention that would nominate him for a second term, the schedule somehow did not include a sensational arrest on a Chinese billionaire’s yacht.

The last thing the president wanted to see as he kick-starts his campaign was the architect of his last campaign hauled away in handcuffs on charges of bilking his own supporters in a build-the-wall fund-raising scam. Yet there was Stephen K. Bannon, the mastermind of the 2016 election, with his hair now long and scraggly and his face weathered, marched into court and called a crook.

That was only part of the president’s tough week or so. In recent days, the Senate released a damning bipartisan report on Russia’s efforts to help Mr. Trump win in 2016. A government agency concluded that a member of the president’s cabinet is serving in violation of the law. A court rejected Mr. Trump’s effort to keep his tax returns secret. Unemployment claims ticked back up. And former Vice President Joseph R. Biden Jr. smoothly pulled off his own convention without the gaffes Mr. Trump had predicted.

If that were not enough, the president found his family dysfunction playing out in public at the same time he was presiding over a funeral for his younger brother at the White House. Tapes secretly made by his niece over the past couple of years and provided to The Washington Post captured the president’s own sister saying that he “has no principles, none,” railing about “his goddamned tweet and lying” and denouncing his “phoniness” and “cruelty.”

It was a week that in some ways encapsulated the volatile Trump presidency and the baggage he brings into the contest this fall with Mr. Biden: a team at constant war with the criminal justice system, a president defiant of the norms respected by others in the Oval Office, a once-healthy economy sputtering amid a pandemic, an opposition roused and unified by mutual antipathy for the incumbent and discord even among those closest to him.

Whether any of it does lasting damage remains to be seen. While he has never governed with the support of a majority of Americans in most polls, Mr. Trump has nonetheless bulled his way through scandals and setbacks that would have doomed an ordinary politician, skipping from one to the next so rapidly that they often get lost in the whirlwind.

“In normal times, each of these individual events would be total showstoppers,” said Scott Reed, a Republican strategist who ran Bob Dole’s presidential campaign in 1996. “But we now live in a super polarized country in a super challenging time. Most voters just want to return to good old economic growth and job security.”

The coming week will be critical to Mr. Trump’s effort to put Mr. Bannon’s arrest and the rest behind him, rewrite the narrative and persuade enough Americans that he is the one best equipped to bring back the economy and jobs. For the next four days, he will command the national stage, even if virtually, with his presidency on the line.

The Republican convention gets underway on Monday with the only in-person event of either party’s quadrennial gathering, a roll call of the states featuring 336 delegates spaced out and wearing masks in a convention center in Charlotte, N.C., and Mr. Trump on hand. The rest of the week’s events will be held remotely, much as the Democrats’ were, although the president plans to speak in some form on each of the four days, a ubiquitous performance unlike at any past convention but in keeping with his all-Trump, all-the-time approach of the past four years.

The advantage of incumbency means that the president has more tools to try to change the subject than any other candidate, like calling a news conference on the eve of his convention to make what he called “a truly historic announcement” authorizing an emergency treatment for the coronavirus. “This has nothing to do with politics,” he added. “It has to do with life and death.”

It also means that Mr. Trump is staging his formal acceptance speech on Thursday not from a random hall in Wilmington, Del., as Mr. Biden was left to do, but from the majesty of the White House, despite criticism that using the White House for the address violates ethics laws.

Mr. Trump, who took office denouncing what he called “American carnage,” said he would use the event to present an optimistic view of the country after nearly four years of his governance, in contrast with what he called the “dark” view of the Democratic convention that just nominated Mr. Biden.

“I think we’re going to see something that is going to be very uplifting and positive,” he said in an interview on Fox News over the weekend. “That’s what I’d like it to be.”

And yet he has a dark vision of his own, one where anarchists are rampaging through American cities with the support of radical Democrats. “These riots are an antigovernment movement from the Left that are all in Democrat run cities,” he wrote on Twitter on Sunday.

The convention will give Mr. Trump an opportunity to give a more fully realized answer to a question that seems to have flummoxed him over the summer, namely: What does he want to do in a second term? Asked repeatedly by friendly questioners on Fox News and elsewhere, he has given rambling answers that amounted to more of the same, but he now has the chance to give a crisper version to a national television audience of tens of millions.

He also will try to again deflect blame over his handling of the coronavirus, which has killed more than 176,000 Americans — roughly the equivalent of the entire city of Providence, R.I., or Salem, Ore. — and put millions of people out of work. And while assailing Mr. Biden as a captive of the socialist left, Mr. Trump will argue that he built a great economy before the pandemic and can do so again after it is successfully curbed.

Not on the schedule for the next four nights are major Republican figures like former President George W. Bush or Senator Mitt Romney of Utah, the party’s 2012 presidential nominee. Instead, the roster of speakers includes Nikki R. Haley, the former ambassador to the United Nations; Representative Kevin McCarthy of California, the House minority leader; and Senators Tim Scott of South Carolina and Joni Ernst of Iowa. Melania Trump, the first lady, will speak from the White House Rose Garden, and Vice President Mike Pence from Fort McHenry in Baltimore.

Also slated to address the convention are culture war figures like the Missouri couple charged for brandishing guns at peaceful Black Lives Matters protesters passing their home and the former Kentucky high school student whose face-to-face standoff with a Native American protester in 2019 went viral online. In addition, the convention will spotlight the parents of Kayla Mueller, who was killed by the Islamic State in 2015, and Alice Johnson, whose life prison term on drug charges was commuted by Mr. Trump in 2018.

“You’re going to see and hear from many Americans whose lives have been monumentally impacted by this administration’s policies,” Kellyanne Conway, the president’s counselor, told reporters on Friday. “We definitely want to improve on the dour and sour mood of the D.N.C. The two most popular words at the Democratic convention were not ‘Joe Biden.’ They were ‘Donald Trump.’”

What viewers will not see is Ms. Conway’s colleague from the 2016 campaign, Mr. Bannon, who became a virtual cult figure among some after helping Mr. Trump pull one of the biggest upset victories in modern American history. Mr. Bannon’s arrest last week on fraud charges could hardly have come at a less propitious moment for a president down in some polls by double digits and looking to regain traction. The schadenfreude seemed only more pronounced by the fact that the charges revolve around an alleged scheme to profit off the donations of Trump supporters fooled into thinking they were helping to build his signature border wall, which Mr. Trump had originally promised Mexico would pay for.

Scandal on the eve of a convention is not necessarily a political killer by itself. President Bill Clinton had to fire his chief strategist, Dick Morris, after revelations about the aide’s antics with a toe-sucking prostitute, a story that broke the morning of the president’s acceptance speech at the 1996 convention and did no lasting damage in the end.

The difference is that in Mr. Trump’s case the accumulation of such episodes can weigh on a presidency. Mr. Bannon joins a who’s who of onetime Trump team members to see the inside of a prison cell or criminal courtroom, including Michael T. Flynn, Roger J. Stone Jr., Paul Manafort, Rick Gates, George Papadopoulos and Michael Cohen.

“For someone who campaigned on a promise to ‘drain the swamp,’ Trump has seen a large number of close advisers charged with crimes,” said Barbara McQuade, a former U.S. attorney in Michigan. “The long list of associates charged with crimes speaks volumes about Trump’s judgment and lack of rigor in vetting.”

Mr. Trump has sought to turn that on its head, flinging out incendiary and unsubstantiated accusations that his predecessor, President Barack Obama, Mr. Biden and their team were the ones involved in a treasonous conspiracy to illegally spy on him. But no one close to Mr. Obama or Mr. Biden has been charged with a crime even by Mr. Trump’s Justice Department.

For an incumbent, conventions are challenging even in the best of times because a sitting president is so well known and voters’ views of him are usually pretty set. In Mr. Trump’s case, his approval rating, currently in the low 40s, has remained relatively stable over four years through all the arrests and controversies. It puts him significantly behind Mr. Biden, and since 1936 no incumbent as far down as Mr. Trump at this stage in the race came back to win except President Harry S. Truman in 1948.

But the president has upended expectations before, and with the pandemic and the disputes over mail-in voting, there are so many variables this time that defy ordinary prognostication. For the next four days, Mr. Trump will tell his story and, as he put it recently in another context, it is what it is.

Asked on Fox if he would change his tone, he scoffed at the very notion. “If I don’t fight back strong,” he said, “I wouldn’t be sitting here right now talking to you.”