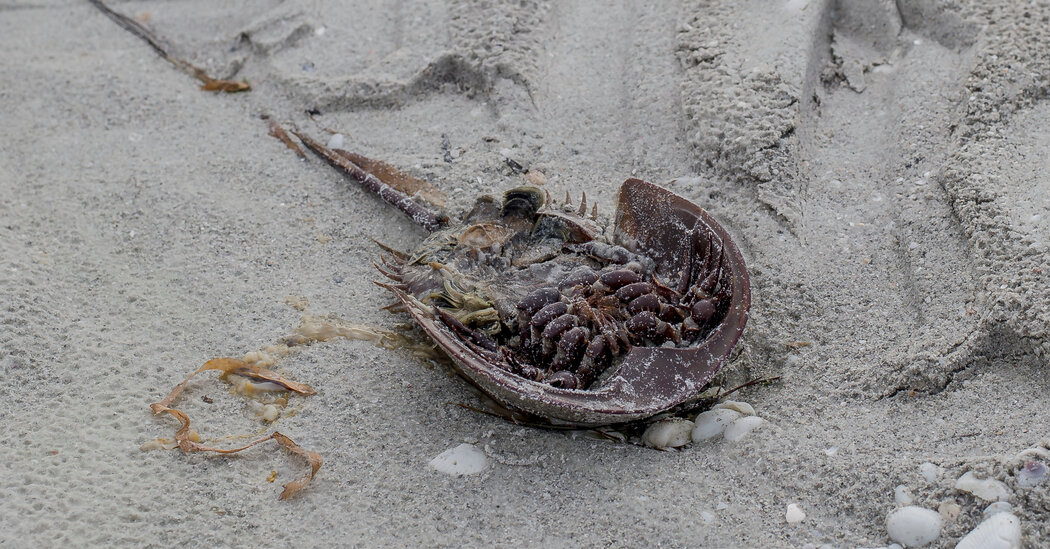 Horseshoe crabs are little armored vehicles with bright blue blood. For hundreds of millions of years, they’ve been trundling along the ocean floor. In all that time, other mighty creatures have come and gone: dinosaurs, mammoths, terror birds, Neanderthals. The humble horseshoe crab has lived on, looking not that different these days from their forebears in the Mesozoic Era.

“I find their fossil record amazing, fantastic and brilliant,” said Russell Bicknell, a paleontologist at the University of New England in Australia who studies the crabs’ evolution and development. “I just love that with, realistically, such a tiny tool kit, they’ve managed to do so much.”

But while the horseshoe crab may seem eternal, it has been pulled into the middle of a scientific controversy.

In a paper published last week in the journal Molecular Biology and Evolution, Prashant Sharma, a professor of biology at the University of Wisconsin-Madison, and his colleagues are challenging the idea that horseshoe crabs are on their own very particular and individual branch on the tree of life. Rather, they claim that the animals belong right in the middle of the family tree of the arachnids, the group that includes spiders and scorpions. If their analysis is correct, it throws the roots of the arachnids’ tree into question, and suggests arachnids have a stranger, more complicated evolutionary history than scientists realized.

The new paper is the latest salvo in a debate about the emergence of arachnids. Scientists have traditionally relied on detailed analysis of living and extinct creatures’ bodies to understand evolution. They examined the tips of arachnids’ mandibles, the placement of legs and other features, tracing traits through evolutionary time. The tree they sketched showed a common ancestor of the whole group that crawled ashore more than 600 million years ago. Since that time, almost all arachnids have lived on land (although they might ascend your door frame to catch flying bugs in a web).

But it’s difficult to know what really happened 600 million years ago on the shores of a younger Earth. Arachnids’ ancestors broke into a bevy of new species very suddenly, and discerning which groups diverged first, making their own branches of the tree of life, has always been difficult, said Antonis Rokas, a professor of evolutionary biology at Vanderbilt University.

In recent years, with the rise of genome sequencing, another way to build family trees has become possible. If comparing anatomies was like poring over passenger manifests at Ellis Island to create a genealogy, then this new technique is like evolutionary 23andMe, sorting organisms according to the similarities in their genetics. It can provide a way to verify what earlier methods have found and even make new discoveries.

But, and here’s where the debate comes in, the new trees do not always agree with the old ones. Dr. Sharma and his colleagues failed to find consistent evidence of that shared common ancestor — the root of the traditional arachnid tree — when they built a genome-based tree for a 2014 paper.

Instead, the tree suggested it was more likely that arachnids diverged from one another even further back in the past. And they were not a single, closely related group, but separate clusters of species that had been grouped together by scientists. If that were the case, then the horseshoe crabs, which were thought to be mere neighbors of the arachnids, were actually members of the clan.

Dr. Sharma and his colleagues’ 2014 study was small, but in the new study, they drew on genetic data from more than 500 species as well as anatomical data. The results were the same: Arachnids did not cluster together tightly. Horseshoe crabs, as a result, nestled among them.

“In the end we just had to speak that heresy out loud,” Dr. Sharma said.

If arachnids’ common ancestor is actually much deeper in evolutionary history, then their forebears may have crawled on to land more than once. There may have been multiple waves of that startling transition, with gills transforming into lungs and limbs taking on new roles.

“We used to think that particular morphological characteristics or ecological transitions, from land to sea or from sea to land, were very rare,” said Dr. Rokas, who is not an author of the paper. “But we really don’t know for any given lineage how difficult these transitions are.”

Maybe radical change, in other words, is less difficult than we suppose. In this alternate telling of the early days of the arachnids, horseshoe crabs remained comfortably in the water while their relations took their chances on shore, at least two and perhaps three or four separate times over the eons. And if their bodies look similar, Dr. Sharma and his co-authors suggest, perhaps this is because evolution gave them similar solutions to the problem of getting on dry land, ruthlessly honing them into forms that worked.

The team’s 2014 paper was met critically by researchers who disagree with their interpretation. A group of paleontologists and molecular biologists followed up with a paper proposing ways that genetic information could build a tree that brought arachnids back together.

The latest results, still based primarily on genetic data, are difficult to reconcile with what is written in the fossil record, some paleontologists say. They imply a much more convoluted evolutionary path for the arachnids than fossils suggest, Dr. Bicknell said.

Others describe this paper as a way station in science’s slow progression toward the truth.

“Personally, I think it is an interesting finding,” said Jeffrey Shultz, a professor of entomology at the University of Maryland who studies arachnid evolution, “but experience shows that results can change when the same data are analyzed by different workers, when new data are added to the mix or when new insights into genomic evolution come to light.”

The new results will certainly lead to debate, said Hannah Wood, a curator and research entomologist at the National Museum of Natural History, Smithsonian Institution.

“But this is how this stuff works,” she said, adding that another group can challenge their hypothesis. “I think eventually we’ll have an answer.”

Where does this leave the horseshoe crab? For now, Dr. Bicknell said, this latest idea of their history is another quirk among many.

“They’re already weird enough as it is — just chuck more fuel on that fire,” he said. “It’s just a case of really, in the family tree, when their weird branch popped off the main stem. When did it happen? And why did it happen? It continues that discussion.”