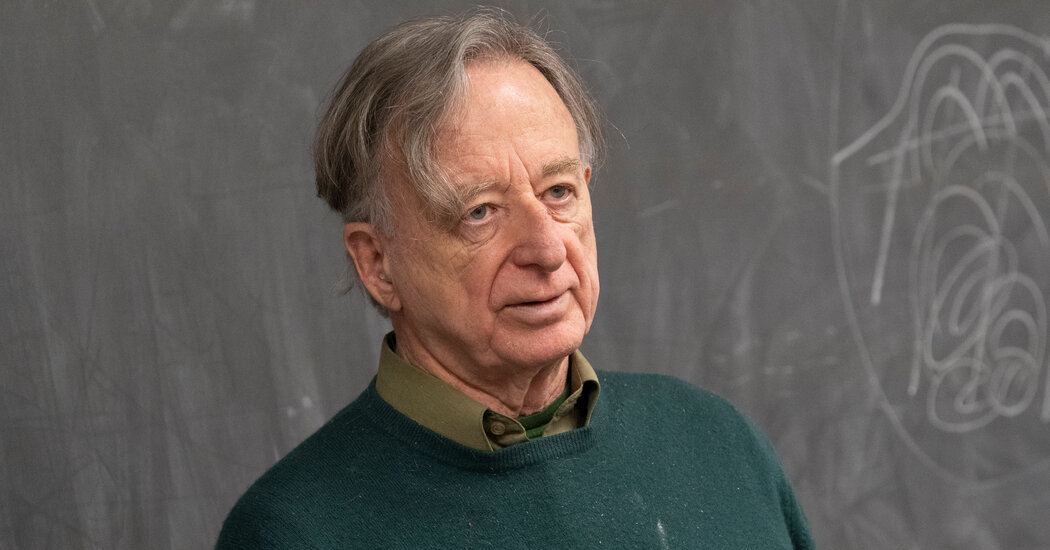 Dennis P. Sullivan, a professor of mathematics at Stony Brook University and the City University of New York Graduate Center, is the winner of this year’s Abel Prize — the equivalent of a Nobel in mathematics.

In its citation, the Norwegian Academy of Science and Letters, the organization that administers the Abel, said Dr. Sullivan was honored “for his groundbreaking contributions to topology in its broadest sense, and in particular its algebraic, geometric and dynamical aspects.”

Topology is the study of space and shapes, and most of Dr. Sullivan’s work involves what mathematicians call manifolds — the higher-dimensional versions of two-dimensional surfaces. While that work is abstract, some of his recent research in fluid flows and turbulence could add to the understanding of the paths of hurricanes, the dispersions of air pollutants and the whorls of vortices behind airplane wings.

There is no Nobel Prize in mathematics, and for decades, the most prestigious awards in math were the Fields Medals, awarded in small batches every four years to the most accomplished mathematicians who are 40 or younger.

The Abel, named after Niels Henrik Abel, a Norwegian mathematician, is set up more like the Nobels. Since 2003 it has been given annually to highlight important advances in mathematics. Previous laureates include Andrew J. Wiles, who proved Fermat’s last theorem and is now at the University of Oxford; John F. Nash Jr., whose life was portrayed in the movie “A Beautiful Mind”; and Karen Uhlenbeck, an emeritus professor at the University of Texas at Austin who in 2019 became the first woman to receive an Abel.

Ulrike Tillmann, a mathematician at the University of Oxford who served on the Abel committee, said that given Dr. Sullivan’s “absolutely fantastic work” in both algebraic topology and dynamical systems, “it was a very easy decision to make.”

Dr. Sullivan said he had a “nice reaction” to the news.

Dr. Sullivan was born in Port Huron, Mich., in 1941; his family later moved to Houston.

In a parallel universe, Dr. Sullivan perhaps spent his career as a chemical engineer. That was his major at Rice University until his sophomore year. One day during an advanced calculus lecture, the professor drew two shapes on the blackboard — one a circle, the other more blobby, like a kidney. He then said you could stretch either one to fit on the other.

That was not particularly surprising. But then the professor said there was a way — and essentially just one way — to do the stretching such that the stretching was the same in all directions.

“This blew my mind,” Dr. Sullivan recalled. “This was not like mathematics I’d learned up to that point. It was much deeper.”

He switched from chemical engineering to math, and he completed a doctorate at Princeton in 1966.

Dr. Sullivan was an early adopter of a technique known as surgery theory. Using this method allowed for innovative mathematical explorations, such as cutting two round holes in a sphere and then gluing one end of a tube to each of the holes on the outside of the sphere, producing a kettleball-like shape.

That allowed mathematicians to study what kinds of topologies could be stitched together.

Dr. Sullivan used surgery theory to study how manifolds could be divided into simpler pieces: For example, a two-dimensional manifold like the surface of a sphere can be approximated by triangles that are then glued back together.

It was known that all triangulations of two-dimensional surfaces are equivalent, and the same was true for three-dimensional manifolds.

It was conjectured that the assertion was true for manifolds of all dimensions, and Dr. Sullivan showed that it was almost always true in five dimensions or more.

Later, Dr. Sullivan shifted his focus to dynamical systems, although those problems still involved manifolds. “Dynamical systems happen inside manifolds,” he said. “It’s a way to return to that geometric context.”

One of his lasting contributions is what is known as the “Sullivan dictionary,” which links dynamics with three-dimensional geometry. That enabled him to prove a mathematical conjecture that had been unsolved since the 1920s.

The deep and unexpected connections between these disciplines also helped Dr. Sullivan figure out the mathematical underpinnings of a phenomenon known as period doubling that had been discovered and studied by physicists.

It was not an easy problem. “You had to find the hypothesis that made it true,” Dr. Sullivan said. “It took eight years.”

“He ushered in a whole new theory of complex dynamical systems,” said Curtis T. McMullen, a Harvard mathematician who completed his graduate studies with Dr. Sullivan as his adviser. “The tools that he used, and even more so the analogies that he put to the fore, have been guiding the field ever since.”

Dr. Sullivan has since also tackled problems in fluid dynamics.

When Dr. Sullivan accepted the Balzan Prize for Mathematics in 2014, he said he hoped to test whether the theoretical tools he had developed could be applied to practical problems like hurricane prediction and the air resistance of aircraft wings.

Dr. Sullivan said he could not yet show that he had come up with better computer models. “But I would say, we’re on the right track,” he said.