A Ukrainian School in New York Takes on a Big Mission 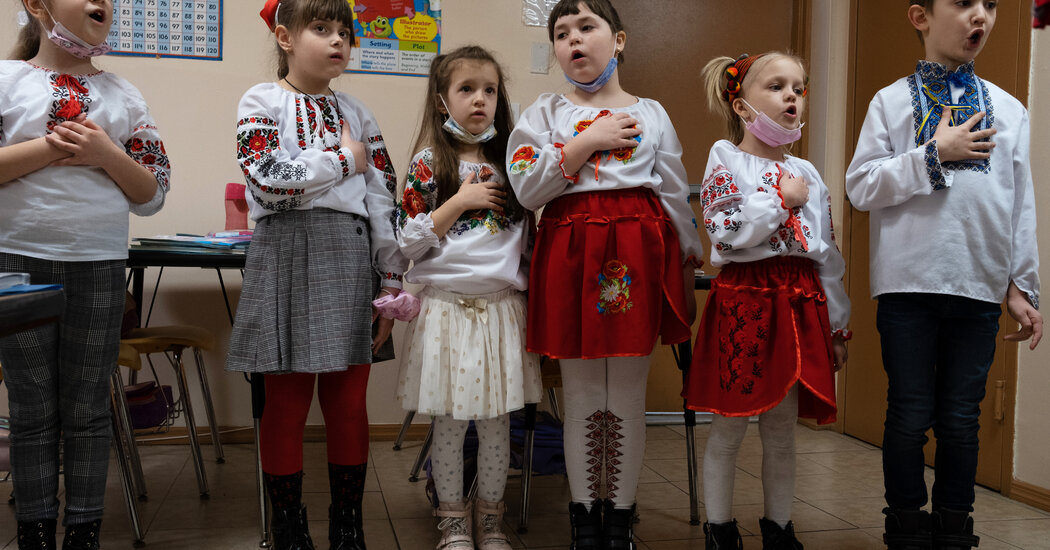 This is the Education Briefing, a weekly update on the most important news in U.S. education. Sign up here to get this newsletter in your inbox.

Today: Ukrainian language schools have become a lifeline for children and parents in the diaspora. And the pandemic has created a national reading crisis, especially among younger children.

More than 2 million Ukrainians have fled the country since last month, according to the United Nations. For children trapped in the horror of the sustained Russian attack, learning, at least in the classroom, is on pause.

But children in the large Ukrainian diaspora — immigrants or those with strong family ties — are living a split-screen reality.

In the United States, they go to school. They learn about trigonometry or photosynthesis. They eat lunch. They talk to friends who may have barely heard of the war. Then, they go home, back to parents constantly checking in with relatives, glued to the news.

For these families, Ukrainian schools, usually held on Saturdays, have become about more than just learning the language. They are helping children understand where they come from — a task that feels more urgent than ever.

“The world gets it, but they don’t get it as a Ukrainian person would get it,” said Ivan Makar, the principal of the Self-Reliance Saturday School of Ukrainian Studies in Manhattan. “It’s our culture, it’s our people, it’s our tradition, it’s our language. It’s our everything.”

The school, in Manhattan’s East Village, opened in 1949. Today, the schools offers classes on the Ukrainian language and culture to about 225 students, from pre-K to 11th grade. Students learn about Ukrainian geography, history and literature.

“In times of peace, it’s not always clear why this was important,” said Daria Melnyk, a Ukrainian American with two children at the school. She added that now, “the consistency and stability of going to Ukrainian school and reinforcing this at home gives us a way to respond in a moment of crisis.”

In the two Saturdays since the war started, the school has rallied behind a message of unity, trying to help students understand the invasion. Teachers held an assembly, and the kids dressed in traditional embroidered shirts, wearing blue and yellow ribbons, the colors of the flag.

The children come to the school on Saturdays “so that you know who you are,” Makar said. “So that people can never tell you something different. So that you know that there’s a language.”

For parents, the school is a respite. Many are worried about family members still in Ukraine. Others are heartened that their children are deepening their ties to Ukraine, despite the invasion.

“In some ways, nothing has really changed,” Melnyk said. “We’re still speaking Ukrainian at home, we’re going to Ukrainian school, but it feels bigger.”

Melnyk and her husband have never taken their children to Ukraine — they’re 6 and 7, and were only recently vaccinated — but hope to one day.

“When we made the choice to make Ukrainian our language at home, it was more about honoring our past,” Melynk said. “I think it’s become now about imagining a future. And I mean that literally. We don’t know how this is going to end.”

The kindergarten crisis of last year, when millions of 5-year-olds spent months outside of classrooms, has become this year’s reading emergency.

As the pandemic enters its third year, a cluster of new studies show that about a third of children in the youngest grades are missing reading benchmarks, up significantly from before the pandemic. In Virginia, one study found that early reading skills were at an “alarming” 20-year low this fall.

And while children in every demographic group have been affected, Black and Hispanic children, as well as those from low-income families, those with disabilities and those who are not fluent in English, have fallen the furthest behind.

“Reading is the building block of human knowledge,” my colleague Dana Goldstein, who covers education, told the Coronavirus Briefing newsletter. “It’s the all-consuming purpose of elementary academic education in many ways.”

Despite political controversies over masks, there is not yet strong evidence that they have hindered the development of reading skills.

Instead, the pandemic appears to have deepened a national failure to teach kids to read: In 2019, national and international exams showed stagnant or declining performance for American students in reading, and widening gaps between high and low performers.

Nearly half of public schools also have teaching vacancies, and many schools are missing educators trained in phonics and phonemic awareness — the foundational skill that links spoken English to the letters that appear on the page.

And children also spent months out of the classroom. Even if they had an internet connection, they struggled to learn the basics of reading without explicit, hands-on instruction.

“Reading at home is really important for building interest and motivation to read,” Dana said, “but many children need a lot more explicit instruction to learn to read — more than parents are able to provide.”

In other virus news:

What else we’re reading

Tip: Check out ‘The Argument’

You may be interested in this week’s episode of “The Argument,” a Times podcast about social debates, where two leading health experts discuss this new phase of the pandemic. Throughout the conversation, they discuss a path forward to fewer restrictions in schools.

Dr. Aaron Carroll, the chief health officer at Indiana University and a regular Times contributor, pointed out that children regularly socialize outside of the classroom. “We focus on school because it’s what we can control, but I don’t think there’s a lot of evidence that says school is the most dangerous thing that kids do all day,” he said.

He also said that vaccinations may be a golden calf. Many parents are not lining up to vaccinate their children, so there’s little evidence to suggest that opening shots to even younger kids will have much of an effect.

“We can see that the percentages of kids who have gotten vaccinated so far are already low,” he said. “Without mandates, we don’t get very high levels of vaccination in general.”

That’s just part of the wide-ranging conversation. I highly recommend a listen!

Sign up here to get the briefing by email.