A Trooper’s Lethal Force Was Justified by His Boss’s Wife: The Prosecutor 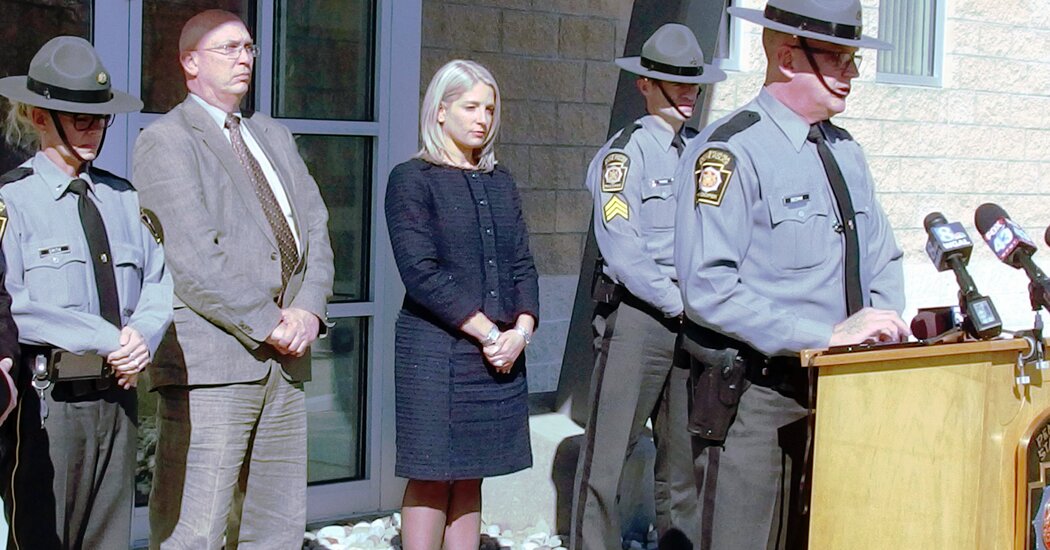 The district attorney of Lebanon County, Pa., is deciding whether to criminally charge a state trooper who fatally shot a motorist last fall. But the prosecutor, Pier Hess Graf, is unusually close to the case: Her husband, a corporal in the State Police, previously supervised the trooper.

The trooper, Jay Splain, has killed four people in different on-the-job encounters over the past 15 years, a remarkable tally first disclosed by The New York Times last year. He was cleared in the first three shootings — including one in March 2020, when he killed an unarmed woman, Charity Thome, after a high-speed chase. Ms. Graf declined to charge him after about a month, without publicly disclosing that her husband was then the trooper’s boss.

Stephen Gillers, a New York University law professor and expert on legal ethics, said Ms. Graf should have recused herself. “The public can’t be expected to trust the impartiality of her decision regarding a trooper that her husband supervised,” he said.

In a statement, Ms. Graf said she did not consider her husband’s supervision of Trooper Splain a conflict of interest, noting that her husband, Cpl. Christopher Graf, was off duty on the night of Ms. Thome’s shooting and played no role. When she became district attorney in January 2020, she said, she consulted with the president of the Pennsylvania Courts of Common Pleas before establishing a written policy that would require her recusal only if her husband had been a material witness or provided an affidavit related to criminal charges.

“To anyone who knows or has worked with me, the notion I am incapable of making up my own mind or following my own beliefs is laughable,” Ms. Graf wrote. “I was a prosecutor before my marriage; I remain a prosecutor after my marriage.”

But Mr. Gillers, the ethics expert, said her conflict policy was too narrow, in part because it is impossible to know at the outset of such a case what part a supervisor might have played. “The investigation could lead to negligence on the part of her husband, or to a failure to supervise, and for that reason alone she should not do it,” he added.

Ms. Graf is now weighing whether Trooper Splain should be charged in the shooting last November of a man driving a Volkswagen Beetle, allegedly because the driver posed a threat to an officer. Trooper Splain, who patrols a largely rural region where police shootings and violent crime are rare, has been on desk duty since the killing, according to the Pennsylvania State Police. Trooper Splain did not respond to requests for comment.

It is unclear how long Trooper Splain worked under Ms. Graf’s husband. But the corporal moved to a training position in June 2021, meaning he had left his supervisory role before the trooper’s fourth shooting.

The Times’s reporting on Trooper Splain found inconsistencies between the evidence of what occurred and what the police said had happened. The trooper appeared to depart from police protocols in several of the fatal confrontations. In the first two encounters — in 2007 and 2017 — he shot men who had threatened to kill themselves and whose family members had called for help.

In the March 2020 shooting, Ms. Thome, who had a history of mental illness and drug addiction, refused to pull over after she was reported trying to break into her former home. When she was stopped, she drove into another officer’s S.U.V. at about 5 miles per hour, according to court documents. Trooper Splain and his partner shot Ms. Thome in her vehicle, later telling prosecutors they feared multiple possible outcomes, including Ms. Thome’s reversing and running over officers. The Times originally reported that Trooper Splain worked in the same barracks as Corporal Graf, but the fact that the corporal directly supervised him adds another unusual circumstance.

Although Corporal Graf was not on duty at the time of the killing, he was interviewed by internal affairs in the case. A corporal in the State Police typically supervises six or seven troopers, the agency said.

Ms. Graf has been outspoken about her support of law enforcement. She hosts an annual fund-raiser, “Back the Blue,” for a nonprofit that helps the families of slain officers. She has donated small amounts of her campaign contributions to that same charity and to a foundation named after an officer killed in the line of duty.

Last month, the district attorney’s Facebook page advertised the sale of yard signs and T-shirts to benefit a foundation formed in the memory of a Lebanon city police officer killed in March.

A year ago, Ms. Graf co-sponsored a memorial service for slain officers during National Police Week, saying the police took grave and serious risks every day. “Yet each of you out there serve your communities honorably, and with respect,” she said.

In February, the Lebanon County branch of the N.A.A.C.P. filed a complaint against Ms. Graf with a state disciplinary board, claiming a conflict of interest in her handling of her investigation into Trooper Splain, in part because of her husband’s role. The board declined to provide the status of the case.

So far, Ms. Graf has spent more than six months looking into Trooper Splain’s shooting of Andrew Dzwonchyk, killed on Nov. 7 as troopers responded to a complaint from his ex-girlfriend that he had violated a protection order.

The troopers tried to arrest Mr. Dzwonchyk in his car after he showed up at her house at night, allegedly looking for a thermometer for one of their sons. But a struggle ensued, according to a police spokesman at a news conference the next morning. The spokesman said one officer had gotten caught inside the vehicle, which moved forward and backward, dragging him.

Mr. Dzwonchyk’s 1999 Beetle was a stick shift, making it difficult to go forward and backward quickly. Attempts to subdue Mr. Dzwonchyk with a Taser did not work, according to the spokesman. Then Trooper Splain fired his weapon. Many large police departments ban shooting at moving vehicles because it is often dangerous, ineffective and unnecessary.

Autopsy results show that Mr. Dzwonchyk was shot five times, twice in the head and three times in the area of his left shoulder. The second trooper was not injured. A spokesman for the State Police declined to comment on the investigation into this shooting.