A Timeline of the Events in the Alex Murdaugh Murder Case 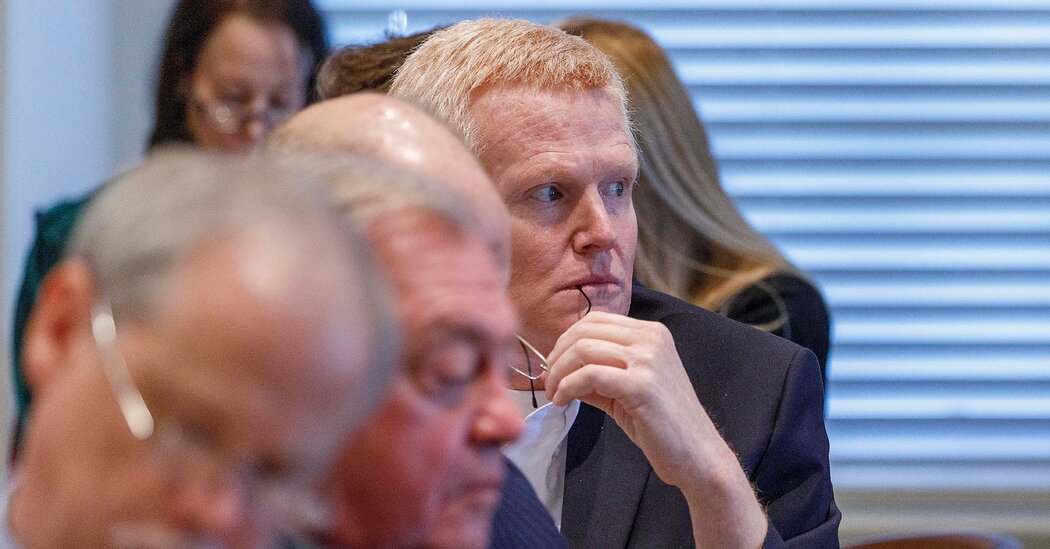 The criminal case against Alex Murdaugh, the former lawyer accused of killing his wife and son, is part of a web of accusations, investigations and lawsuits that have accompanied the downfall of a member of one of South Carolina’s most prominent legal dynasties.

Mr. Murdaugh was for years a well-known lawyer specializing in civil litigation. His family law firm, based in the tiny town of Hampton, was considered a powerhouse on the state plaintiffs bar, and his father, grandfather and great-grandfather had all served as the top prosecutors across a wide region of the state.

Here is a timeline of the major events related to the case:

July 8, 2015: The body of Stephen Smith, 19, was found on Sandy Run Road in Hampton County, S.C. His death was ruled a hit and run, but his family had lingering questions.

Feb. 26, 2018: Gloria Satterfield, 57, who worked as a housekeeper and nanny for the Murdaugh family for about a quarter-century, died about two weeks after she was reported to have fallen on the front stairs of the family’s hunting property.

Feb. 24, 2019: Alex Murdaugh’s younger son, Paul, who was then 19, drunkenly crashed the family boat into a bridge, witnesses said, throwing several of his passengers into the water. The body of one passenger, Mallory Beach, 19, was found a week later. Ms. Beach’s parents would later sue Alex Murdaugh, bringing pressure on him to reveal details of his finances.

April 18, 2019: Paul Murdaugh was charged with three felony counts in connection with the deadly boat crash. He later pleaded not guilty.

June 7, 2021: Mr. Murdaugh called 911 to report that his wife, Maggie, and son Paul had been shot at the family’s hunting property in Islandton, a rural hamlet about 65 miles west of Charleston.

The Murdaughs are powerful. The family has dominated the legal profession in a rural swath of the state for more than a century. For nearly 90 years, the post of chief prosecutor for a five-county region was held by a Murdaugh. And for even longer, the family’s law firm has been one of the state’s leading tort litigation firms.

Mr. Murdaugh has been accused of swindling millions. The lawyer was arrested on Oct. 14, 2021, and charged with stealing millions of dollars from a settlement intended for the children of a housekeeper who died at the family’s home in 2018 after falling on the front steps.

Aug. 11, 2021: Duffie Stone, the region’s top prosecutor since 2006, recused himself from the June 7 murder case in a letter to the state attorney general, Alan Wilson, whose office is now prosecuting the case. Mr. Stone knew Mr. Murdaugh and had worked under his father, Randolph Murdaugh III, who preceded Mr. Stone as the prosecutor for South Carolina’s 14th Judicial Circuit.

Sept. 3, 2021: Mr. Murdaugh was forced to resign from his family law firm after his partners said that he had misused millions of dollars of client and firm money.

Sept. 4, 2021: Mr. Murdaugh called 911 from the side of a road not far from his home and said that he had been shot in the head. He claimed that the shooter had pulled up beside him as he was inspecting a flat tire. Mr. Murdaugh survived with a head wound.

Sept. 6, 2021: Mr. Murdaugh released a statement through his lawyers, saying he had made decisions he regretted and was entering a “rehab” program.

Sept. 14, 2021: The South Carolina Law Enforcement Division said Mr. Murdaugh had admitted that he asked a former client, Curtis Edward Smith, to shoot and kill him on Sept. 4 so that Mr. Murdaugh’s surviving son, Richard, who is known as Buster, could collect a $10 million insurance payment.

Sept. 15, 2021: South Carolina law enforcement officials announced an investigation into the death of Ms. Satterfield, the housekeeper who died in 2018, and her family members filed a lawsuit against Mr. Murdaugh and others alleging they pocketed settlement funds related to her death.

Sept. 16, 2021: Mr. Murdaugh was arrested and charged with fraud and conspiracy in the suicide scheme. His lawyers said that Mr. Murdaugh was depressed by the loss of his family and struggling to stop abusing painkillers when he devised the plan, and that he would check into rehab. A judge released Mr. Murdaugh but ordered him to surrender his passport.

Oct. 14, 2021: Mr. Murdaugh was arrested at a Florida drug detoxification center and charged with swindling millions of dollars from the sons of Ms. Satterfield. He was jailed in Richland County, S.C., and twice denied bond.

Dec. 13, 2021: During a hearing, at which a judge set his bond at $7 million, Mr. Murdaugh’s lawyer said that his client had agreed to pay $4.3 million to Ms. Satterfield’s family. He remained in jail.

June 3, 2022: The police said that they planned to exhume Ms. Satterfield’s body, having received permission from her family.

June 28, 2022: Mr. Murdaugh and Mr. Smith were indicted by the state’s grand jury on two conspiracy counts, including a narcotics count related to the painkiller Oxycodone.

July 14, 2022: Mr. Murdaugh was indicted on two counts of murder. Prosecutors said he fatally shot his wife with a rifle and his son with a shotgun.

July 20, 2022: Mr. Murdaugh pleaded not guilty at a bond hearing, and his lawyers said he wanted to go to trial as soon as possible.

Dec. 16, 2022: A state grand jury indicted Mr. Murdaugh on nine counts of tax evasion, and prosecutors with the state attorney general’s office said he had defrauded a range of people of about $8.8 million.