A Surging Virus. Angry Packers Fans. Can Trump Hold On to Wisconsin? 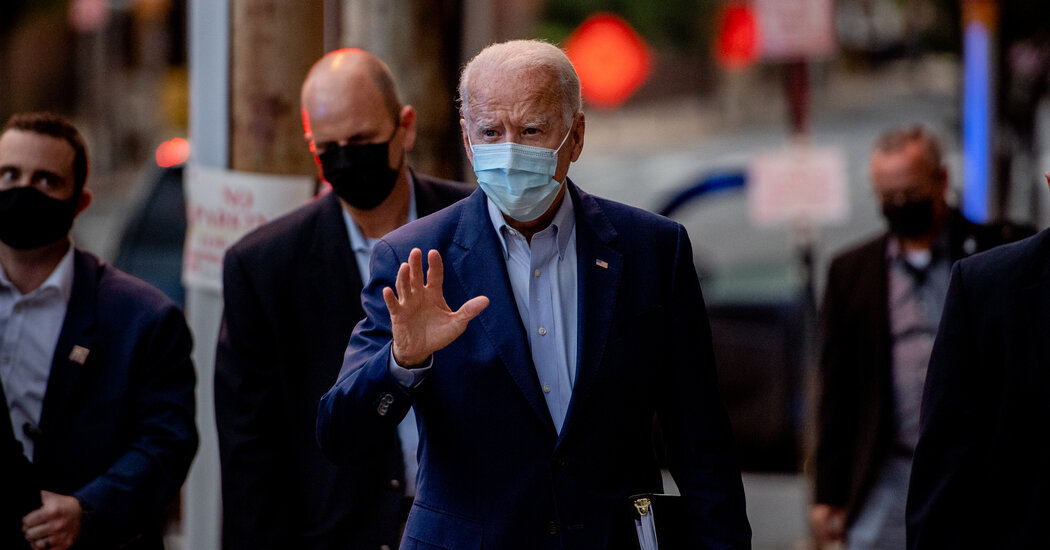 This year, again, virtually every poll has shown the Democrat, Joseph R. Biden Jr., with at least a slight edge over Mr. Trump. A New York Times/Siena College survey last month gave Mr. Biden a five-percentage-point advantage among likely voters. Polls taken since then by CNN and NBC News/Marist College have each given Mr. Biden an outright, 10-point lead.

And with the coronavirus now raging in Wisconsin, particularly in the politically competitive northeastern region, Mr. Trump faces an uphill battle toward repeating his victory from four years ago.

“Certainly, with the sharp rise in cases here, it’s on the agenda for voters,” said Charles Franklin, a political scientist who runs the Marquette Law School poll, which is seen as the definitive political survey in the state. “His handling of Covid does appear to be having a bigger effect on people’s vote than either the economy or his handling of the protests.”

Marquette has released a Wisconsin poll each month since June, and in every one Mr. Biden has held a single-digit lead among likely voters that was within the margin of error. This reflects the steadiness of a race in which Wisconsinites largely know where they stand: Roughly four in five voters have consistently expressed a strong opinion of Mr. Trump’s leadership, whether positive or negative, according to Marquette’s data.

But if there are any small signs of momentum, it appears to be breaking Mr. Biden’s way. His 48 percent approval rating in the poll released this week was his best in a Marquette survey all year, capping a 14-point rise since February. Mr. Trump, meanwhile, was seen positively by 42 percent of Wisconsin voters, leaving his net favorability rating more than 10 points in the red, where it has languished since June.

Concern about the pandemic has ticked upward recently. More than six in 10 Wisconsin voters in the Marquette poll described themselves as at least fairly worried — including 27 percent who said they were very worried, up from 21 percent last month. Fully 50 percent of Wisconsin voters said they did not expect the virus to be under control for at least another year, running counter to Mr. Trump’s insistence that it is already being handled effectively.

And that’s not the only issue where he’s hurting. While Mr. Trump has made Wisconsin a focal point of his “law and order” messaging, particularly after protests broke out over the police shooting of Jacob Blake in Kenosha, Wis., 54 percent of Wisconsin voters said in the Marquette survey that they disapproved of how he had handled this year’s unrest. Just 37 percent approved.

Since the rise of the Tea Party movement a decade ago, white men without college degrees in Wisconsin have shifted toward the Republican Party in large numbers — a development that predated Mr. Trump’s rise, but that he certainly accelerated. Dr. Franklin cited Marquette numbers showing that in 2012, non-college-educated white men in Wisconsin were just five points more likely to be Republicans than Democrats. By this year, the difference had grown to 23 points.

Dr. Franklin said that former Gov. Scott Walker, a Republican, had introduced a newly working-class political lexicon in the early 2010s, when he waged an attack on public-sector unions.

“Walker didn’t spend as much time emphasizing pro-business messages in a way that you would’ve heard previous generations of Republicans saying, ‘What’s good for business is good for the state,’” Dr. Franklin said. “Walker was saying: ‘They’re hard-working taxpayers who need their money, and these unions are taking money from them.’”

But as much as Republicans’ appeals have resonated with many working-class white men, there has not been commensurate movement among women without college degrees. And while Democrats haven’t notched big gains in their vote share among any particular group, they have avoided losing ground among demographics that are growing more quickly — such as college graduates, Latinos and voters in cities.

In Democratic strongholds like Milwaukee and Madison, the state’s two biggest municipalities, the margins actually improved slightly for Democrats between the 2012 and 2016 presidential elections. Dane County, which includes Madison, is the state’s fastest-growing county, and is probably the No. 1 area where Democrats will be looking to run up the score.

And with Wisconsin’s heavily white population growing older, thanks to the aging of the baby boom generation, Mr. Trump’s underperformance among voters 65 and older in polls this year could help Mr. Biden across the state.

The virus hits the gridiron

Green Bay, a heavily blue-collar city in the northeastern part of the state, has been in the news recently as the coronavirus has surged. The Packers, the town’s beloved N.F.L. team, announced this week that for the time being no fans would be allowed to attend games at Lambeau Field. Data released by the N.F.L. Players Association at the end of last month showed that Green Bay had a higher rate of infection than any other team’s market.

For Mr. Trump, all of this puts an unwelcome focus on the coronavirus in the most politically volatile region of the state.

“Green Bay, Appleton and other cities in that region have moved pretty noticeably in a Democratic direction since 2010,” Dr. Franklin said. “The surrounding counties in the region, though, have stayed very Republican, and to the north and west of Green Bay have become even more Republican than before. So the result is, the whole region is still pretty competitive.”

Brown County, which includes Green Bay, broke for Mr. Trump by nine points in 2016, but with Mr. Biden turning back Mr. Trump’s advantage among suburbanites and building his support among the urban Democratic base, it could be up for grabs this year.

Over all, Wisconsin’s population is almost evenly split between Democrats and Republicans, but there’s still a slight Democratic tilt to the electorate, especially when voter engagement is high, since Democrats tend to do better among demographics with lower turnout.

And this year, signs are pointing to what could be a historically high level of participation. Seventy-five percent of registered voters said they were certain to cast a ballot, according to the latest Marquette poll, compared with 71 percent on the eve of the 2016 election. And official statistics on requests for absentee ballots suggest that if anything, voters are even more engaged than they’re telling pollsters.

“In our data, about 33 percent say they’re going to vote absentee by mail — but election officials have already sent out 1.2 million ballots,” Dr. Franklin said, referring to ballots mailed to voters who have expressly requested them. “That would give us about 36 percent of the total registered voters, so that would be a little over what we have in our polling data, though not out of line with it.”

State estimates suggest that Wisconsinites could cast upward of 3.1 million ballots this year, for the first time in history.

A high-turnout election would most likely lift Democrats — but it could help pollsters too. In 2016, a late break toward Mr. Trump, combined with unexpectedly low participation among Democratic voters, threw the state to him.

Unlike some researchers in other states, Marquette’s team in 2016 made sure to weight its data by education levels, and it did not significantly underestimate Mr. Trump’s strength among white voters without degrees. But what did surprise Mr. Franklin that year was Mr. Trump’s success in the suburbs, which he won by 16 points, according to Wisconsin exit polls.

This year, however, Mr. Biden’s lead over Mr. Trump among suburbanites has been steady and strong: Marist’s most recent poll of Wisconsin put him up by 12 points in the suburbs — and on handling the coronavirus, suburban voters chose Mr. Biden over the president by 22 points.